WHEN A WOMAN ASCENDS THE STAIRS (Mikio Naruse, 1960) 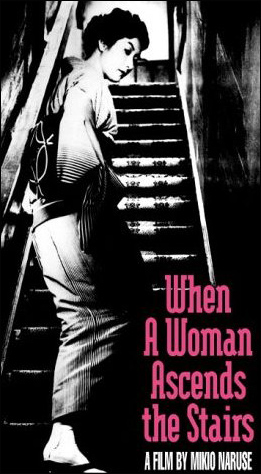 From the earliest age I have thought that the world we
live in betrays us – this thought remains with me.

Stripped of eroticism and sensuality, this act foregrounded  by the film’s title is a decidedly Sisyphean act. It is a recurring motif within the story that lays bare the central character’s daily struggle to keep her dignity. Each night, Keiko repeats this ascent, more mechanical, more labored each time, on her way to a world that compromises her.

The stairs lead to the Carton Bar, a seedy establishment tucked somewhere in Ginza’s red-light district. Keiko is the madame who runs it. Unlike the wards who work under her, however, Keiko has retained both beauty and respectability. She wears her kimono conservatively and prefers a midwife’s hairdo. And yet, she has remained popular beyond her youthful days.

Towards the beginning, everyone around Keiko reminds her that she’s facing the crossroads of her life: either she settles down with a husband or, alone, make provisions for the future. She is a widower but has retained such attractive qualities that she does not lack for prospective suitors. As the story develops, these would-be husbands, with varying motives, come out of the woodwork.

As the film culminates, we are given to witness Keiko’s fall from grace, something that seems to come with her territory, a commonplace about her job, as a result of a painful miscalculation that reminds her of her station in life. We see the men around her proposing marriage or something less decent, but the film’s concluding images re-emphasize a return to what she dreads doing. Her face and demeanor reveal a measure of strength and dignity, her aspect embodying that Japanese feminine quality belovedly and steadfastly portrayed by Naruse in many films, a silent and all but stoical sufferance amidst unjust, often inescapable circumstances.

Naruse's aesthetics and thematics, on the basis of this film, parallel not only that of Ozu but also that of another illustrious peer, Kenji Mizoguchi. The camera movement is spare and stately, which recall much of Ozu's mature work, but the subject is very much the territory of Mizoguchi. Sympathetic figures who are forced by straitened circumstances into a kind of prostitution are the commonality between Mizoguchi and Naruse. Not only are we reminded of Life of Oharu, but other films with similar themes like A Geisha and Street of Shame. From the West, Fellini also contributes to this sub-genre of sorts with Nights of Cabiria, a film featuring a beleaguered prostitute who soldiers on despite the world's treacheries.