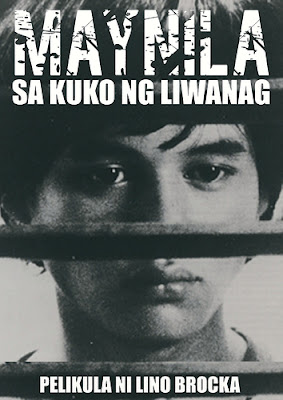 Long before the outside world attracted and absorbed the diasporic swell in the millions, the lure of the big city has held an irresistible promise for the Filipino as restless migrant. Manila as the land of milk and honey, Manila as the fascinating symbol of sensory pleasures, such images have burned recurrently and obsessively in his mind. Underneath the hypnotic facade of the metropolis, its allure of sight and sound, however, nothing could be further from the truth. Yet to this day few appear deterred by reality and the urban influx continues. Everyone is thus familiar with nubile women from the sticks recruited unsuspectingly into urban brothels. Everyone is quite familiar with the housemaid raped, ironed or bludgeoned. Everyone has heard about factory workers locked up in their working places or living in unlivable dormitories. Here is the Brocka classic -- a classic often regarded as the preeminent film on any canonical list of Philippine cinematic treasures -- that recounts the circumstances of one such tragic story.

As the film opens, Maynila Sa Mga Kuko's story has long begun in earnest. At the corner of Misericordia and Ongpin, Julio Madiaga stakes out an apartment above a storefront with a signage emblazoned Chua Tek Trading Store. His long journey from a distant fishing island to Manila has brought him here, where he suspects his girlfriend, Ligaya Paraiso, is being kept against her will. In flashback after flashback, interspersed with Julio's bitter exposition, we are given an idyllic back story, their life of simple poverty but of simple, unfettered happiness too – only to go terribly wrong upon the arrival of a city woman who sweet-talks the womenfolk with prospects of education and well-paying jobs in the big city.

Maynila Sa Mga Kuko, however, is more about the brutalizing impact of the metropolis on Julio than the tragic fate of Ligaya. In order to survive, Julio takes on all kinds of menial and degrading jobs, as a construction worker and as a male prostitute. At firsthand, he witnesses urban corruption and squalor in all their grisly details: the death of his fellow workers in construction accidents, the schemes of the money-grubbing foreman, the subjection of his friend’s sister into prostitution. Julio is slowly accumulating the inhuman provocation of the city. In the meantime, people around him rationalize the advantages of the city, its preferable fate to their life in the countryside. Although the city teems with unsavory characters and shady goings-on, Julio meets some of the living pulse of the city -- all human but all invariably ground down by harsh life. Little by little, the bright neon is fading: this city has little saving grace.

Brocka, adapting Edgardo Reyes novel of the same title, depicts a miserabilist city, and there is little question what tragic trajectory its story is tracing. Brocka does little to hide its allegorical leanings: Ligaya Paraiso, translated as Happiness Paradise, stands for each man’s pursuit of happiness; Ah Tek, the China man who may be responsible for the disappearance of Ligaya, can be read in the vernacular as atik, or money, the driving force that subjugates helpless and powerless fates.

The figure of Julio Madiaga and the milieu that surrounds him remain current in this new century's urban landscape. As I type this down, another man dies at a construction site. An entire factory of workers is discovered living like vermin. Shantytowns of migrant Filipinos are burned down in some corner of Manila. Has it really been 34 years since Brocka committed their tragic silhouettes to film?