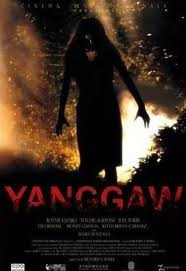 At its most stark and fundamental level, Yanggaw has all the earmarks of a regular horror movie, replicated as it is in the double mold of the monster and phobia variety. Actualizing our primal folkloric fears in the aswang, it features at its centrifugal center a rural family named Villacin, who discover that their migrant daughter has been afflicted with a contagion that turns her into a yanggaw, a gruesome, anthropophagous monster. All the scary signifiers are there, her monstrous transformation and the taste for blood and guts, on one hand, and on the other, the socio-ethical crisis that threatens to shred the unity of this family apart.

But Somes’ feature debut operates on weightier levels of interpretation other than the prognosis of supernatural fears. For one, it posits territorialism in a highly segmented society -- that of provinces, of regions, of governments, of landholders -- and thus the trauma of negotiating its demarcations: a commentary on the fear of the unknown, of seemingly transgressive migration. The disease that afflicts Amor happens in a place where "no one is supposed to wander," a place of known contagion. Soon enough it creeps closer to home, the Villacin house itself, depicted as it is with bleak shadows: it effaces the heads of characters, the frame often bleeding into dark dissolves. The interiors of this abode exude an eerie feeling and true enough, situate in the end an untoward and gory crisis. Cordova, a fictional backward town in the Visayas, is where most of the onscreen violence, murders and killings happen – whether by vigilante justice, the folkloric beast or the people in power.

Corollary to positing the fear of migration is a purposeful attempt by Somes to depict the streak of violence pervasive in our culture, born out of centuries-old divide et empera, the internalized reflex to be divided, to be hostile: everywhere is thus enemy's territory. In one of the opening sequences, Junior Villacin and his son chase a man through their lands alleging him to be a thief. They mete out justice with the butt of their weapons, with extreme prejudice. Junior Villacin himself believes in the curse of the aswang so that he always keeps a bronze bolo by his side. Dolpo, to whom he lost a fraudulent local election, is a Machiavellian political minor who patrols the night with a quick trigger. His advice to Junior sums him up: “You should be willing to kill in order to achieve your purpose.”

Yanggaw excels as a psychological horror as much as an action one. Somes does it both ways with sheer atmospherics of evocative visuals -- at once lush (of thick foliage and leafy surroundings) and austere and spare (of dramatic trajectory) -- lubricated by heart-pounding and unnerving soundscapes. The austere, shoestring aesthetics, for one, encompass bare expressions -- anguished faces, or one with darting, protuberant eyes signaling a monstrous transformation, a reference to the therianthropy in werewolf movies. Textured so frightfully this way, however, it would all come to naught without its powerful portrait of a family undergoing its own unpredictable transformation – now familial, now social and moral.

But it is worth remarking that the sociological and political aspects of Yanggaw are almost as powerful and immersive as those forces that affect the Villacins. Somes relates this family unit to a wider, yet no less violent village. The family's dilemma is how to align the welfare of their daughter with the safety of their unsuspecting community. Meanwhile, Junior, in dire need of money to hospitalize Amor, is advised by the political pragmatics of Dolpo -- to secure money by running in the elections – implying the common practice of instrumentalizing government positions for private ends. Even the witch doctor by the name of Lazarus plays a kind of politics and demands that he remain the sole dispenser of healing to the yanggaw.

In this heavily coded scheme of things, Amor is true to form and semantics -- the epicenter of love but with the double occupancy of terror. She seems to represent not just the Jungian shadow but perhaps the negative form of anima, fangs and all, of her patriarchal father, who must decide whether to keep her (the feminine aspect) in chains or mercifully release her, and when worse comes to worst, ultimately what to do with her.
Posted by Noli Manaig at 8:51 AM No comments: