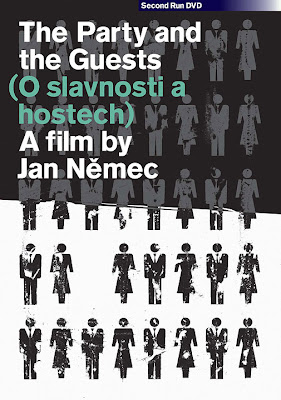 The Iron Curtain may now be a construct of the past -- symbolically and ideologically torn down with the collapse of Communism across Eastern Europe in 1989 -- but little seems to have changed to alter the biased and marginalized view of Eastern Europe. Popular misconceptions are such that Eastern Europe remains economically, and therefore culturally, stunted vis-a-vis their Western brethren. Few non-sequiturs are in desperate need of rectification as much as this last statement. Even under Socialist control, culture oozed from the wounds of repression, and paradoxically the totalitarian shackles served to spur on the flowering of man-made artifacts.

One of the cultural fronts that deserves more widespread investigation and appreciation is the arena of cinema. "Films made in Eastern Europe seem of little or no interest to people in the West. The audiences in western countries find them as antediluvian as the battle for workers' rights in England in the time of Marx," once remarked the Polish master director Andrzej Wajda in his autobiography (Double Vision, My Life in Film, 1986). More than twenty years on, this lamentation seems as true and self-evident as when it was first ventilated. Outside their places of origin, Eastern European films remain confined to film festivals, art-house cinemas, and film societies.

If there is one beacon on the horizon for the plight of marginalized cinema, however, it must be the emergence of new forms of distribution, most notably digital technology and internet commerce. The DVD format, abetted by the split-second availability afforded through e-commerce, is quickly changing the paradigm of distribution. Of late, DVD companies like Second Run, Clavis and Kino and other non-specialized companies have undertaken the task of making available classic films from the hub nations of Eastern European cinema, like Hungary, Poland and Czechoslovakia. (This is not counting the domestically produced titles in Eastern European countries themselves. If only everyone was a polyglot...). It's a genuine windfall for the cineaste always looking to broaden his cinematic horizons.

One of Second Run's recent releases is Jan Němec's The Party and the Guests. Jan Němec is more popularly known for another film entitled Diamonds of the Night. He may not be as well-regarded as the other Czech New Wave directors canonized by the West (namely by Criterion), to wit,  Jiri Menzel (Closely Watched Trains) and the duo of Jan Kadar and Elmar Klos (The Shop on Main Street), but he is no less accomplished. What is probably his drawback -- evident in The Party and the Guests -- is the subtlety (his censorship-circumventing use of allegory) and allusiveness that might be lost on audiences not familiar with the Czech experience.

Wilderness scenes open this seemingly innocuous film, not unlike the idyllic picnic that opens Jaroslav Papousek's Ecce Homo Homolka. A group of middle-aged couples sprawl on the grass like Monet figures and partake indulgently of slices of cake and wine. Changing into their Sunday best and sauntering through the woods, they stroll straight into something disconcerting, something untoward. They are overtaken and manhandled by a group of thugs, who escort them to a clearing in the forest, where a man named Rudolph presides over them, perched behind a desk, a prop conjured out of nowhere. Their captives? They are imprisoned in an imaginary closure drawn on the sands.

Middle-class folks trapped in the woods? Held hostage in an absurdist scenario? Wasn't this all dreamt up before? Why, we are flush in the confines of a seemingly Bunuelian conceit. But the real demiurge of these Bohemian woods soon makes an appearance, the host of the eponymous party -- a wedding reception -- where the buttonholed guests, it becomes clear, are en route. The Prospero-like host orders his Caliban-like minion, Rudolph, to un-detain the guests, who are soon escorted to a picturesque lakeside reception.

But the the theater of the absurd is just starting to thicken (literally: the scriptwriter, Esther Krumbachova, reveals that she patterned the film's dialogue after those found in the plays of Eugene Ionesco). It becomes strikingly clear that we are in the middle of socialist allegory (a prophetic satire of the increasing Soviet intrusion into Czechoslovakian affairs, culminating in the 1968 invasion) as the host, who bears a striking resemblance to Lenin but acts and preens autocratically like Stalin, holds forth in fulsome platitudes, underscoring a comic ridicule. When one of the guests is discovered missing, he takes it an an insult and all but declares the party a big fiasco. A search party is organized, sniffer dogs deployed, but everyone joins the search: a wasteful notion that no one seems inclined to contradict. Totalitarianism, anyone?

Probably the most absurd moment of this film is when all the guests suddenly discover that they are seated at the wrong table and like a confused herd of animals, everyone reshuffles to find the table with their names. It's the confusion, it seems, of the overly ordered lives in this socialist state. The host, who wears a resplendent and magisterial white attire reminiscent of Stalin's aggrandizing portraiture, and his minions, wearing their familiar raffish, gangster-like get-ups, are not impressed. And the fugitive guest, who seems to be the only dissenter in this increasingly repressive state of affairs, must be brought back to the fold. These are the streaks of Fascism that Jan Němecseems to be telegraphing to us. (His other harrowing but paradoxically lyrical film, The Diamonds of the Night, reveals the objects of this pernicious force, the effects of such malevolence.)

The Party and The Guests is one of the signature films of the Czech New Wave, and touted for its oblique political barbs to be the most controversial of the pack. The Czech title translates as About the Celebration and the Guests, but this title that has come down to us -- one that smells of cadre and Communist bureaucracy -- seems more apt, more resonant with connotations. When this film was screened in its homeland, the caustic satire was all too obvious that it received an immediate ban. There are a lot of domestic references, it appears, in the original language which are lost in translation. What we inherit today is a document that foreshadowed a dark era in Czech history; few films are as visionary as this.