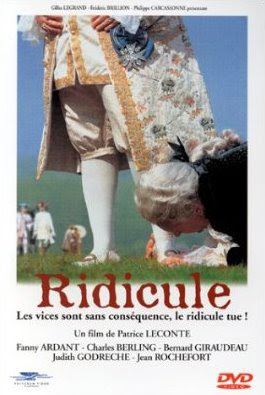 Ridicule, when it goes unrefuted and unretorted in kind, is the kiss of death in this costume film by versatile French director Patrice Leconte. Ridicule, in a nutshell, is a pungent yet tasteful satire on aristocrats set in pre-revolutionary France. Set in the main at the palace in Versailles, it isn't so much about King Louis XVI as it is about his scheming and competing courtiers. At this court, wit is the ammunition; in order to survive – that is, to escape ridicule – one must devote oneself closely and studiously to cultivating it.

Interestingly, this period piece appropriates many of the tropes of American high school movies, only this time in finery and thick facial powder. The competitions of wit and other goings-on at Versailles are not unlike the academic pursuits and rivalries evoked in this genre. One marquis, for instance, is not unlike a conscientious student who keeps careful notes – notebook after notebook – of witticisms he picks up from day to day – quips, paradoxes, repartees, all kinds. Another, an abbot no less, is like an exam cheat who makes sure he gets questions whose answers he already knows. The hectoring cliques are here, too, intent on putting the nonconformists in their place. While those who can’t keep up, the weak-hearted, resort to something drastic. They hang themselves.

Le Marquis Gregoire Ponceludon is the natural wit, the newcomer who is at court for more pressing and urgent reasons. An older aristocrat, Le Marquis de Bellegarde, takes him under his wing and becomes a bosom friend. The old man has a headstrong and academic daughter, Mathilde, who devotes her time to perfecting the 18th century prototype of scuba-diving equipment and testing them out at the nearest well. But in order to further her studies without worries, she has agreed to marry a rich, old nobleman who can provide for her future. But that is all before she meets Gregoire, a well-learned engineer who seeks royal support to drain the fever-infested swamps of his humble region.

Ridicule’s strength lies in its finely-conceived script – though some of it is easily lost in translation. Everyone here – even the deaf-mute – is a master at intellectual one-upmanship and can eloquently trade barbs with those who dare open their mouths. Everyone speaks in sweet, sententious tones, in effortless epigrams, as though they were reading from Voltaire or Rochefoucauld. In Ridicule, wit stands for the superficial concerns of aristocrats while peasants struggle to survive and die of preventable ailments. At court, wit seems to be the index of those who are most treacherous. Take Madame de Blayac, who presides over the games of intellect. She maneuvers and uses every expedient – of words, of charm, of connections – to get her way. Gregoire, beware.

Ironically, King Louis seems oblivious to it all. He displays the least capacity for these verbal games, and often misses the point. It isn’t long before the French Revolution breaks out. Could these courtiers have talked their way out of the guillotine?