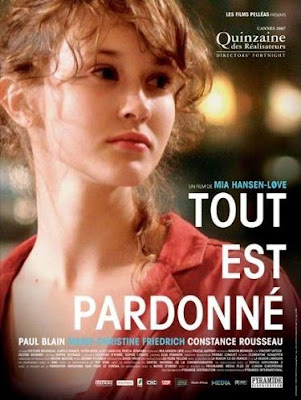 All is Forgiven is a family drama unlike any other: its portrayal of the sad realities of a troubled home, warts and all, is rendered with dignity and grace, subtlety and lyricism. While its underlying foundation and genre is drama – here one that enacts a family's dissolution and fragmentation, and its aftermath – it remains even-keeled and avoids the spectacle of the overwrought. It's a film that lives and breathes with graceful action as much as graceful pauses.

Mia Hansen-Love’s quietly poetic first film is one that does not take a high moral ground about the nature and dynamics of families. Everyone, after all, is born of a family: no didacticism needed. All the film wishes is to frame and follow its characters, its family of three: the thirty-something Frenchman Victor, his Austrian wife, Annette, and their still-uncomprehending five-year-old daughter, Pamela.

The film begins in 1995 in Vienna, where Annette is employed, and shifts to Paris a month or so later, where it slowly becomes clear that each change of residence is an attempt at a fresh start. This is all because Victor is nursing a bad habit. A drug addiction. Casually, he sums up his concept of life this way: writing in the morning (he is a failed poet), taking walks in the afternoon, and doing drugs at night. The change of scenery, however, fails to remedy their escalating marital problems, and the family dissolves.

The second half of the film takes place in Paris, twelve years later. Elided in the action are the rehabilitation of Victor, who now lives quietly in the city as a proof-reader in a publishing house; Annette’s re-marriage with another Frenchman; and the upbringing of Pamela. Pamela, who is now a high school student, soon receives word from Martine, Victor’s sister, and their contact results in a meeting. All those intervening years, Martine reveals, Victor has been trying to touch base with his estranged daughter. When Victor finally does get the chance, the father-daughter reunion is civil and without recrimination. As they meet subsequently again and exchange letters, the past is threshed out and finds a measure of resolution. The end is a moment that echoes with powerful pathos, with an even more ultimate resolution.

All is Forgiven, paradoxically, reveals and repeats what each of us already know, and yet resonates with a kind of emotive power that few films achieve. What’s almost as paradoxical is how Hansen-Love has crafted a highly refreshing film while remaining indebted to a host of filmmakers: in it, we find the quiet grace of Ozu, the poetic touch of Assayas, the conflicts of Pialat, and the tormented figures of Garrel. On second thought, the way Hansen-Love marshals her diverse influences with remarkable assurance and aplomb, and ultimately delivers, why should it be held against her?

Therein lies the real achievement of this film. Once director Hansen-Love realizes the universality of her themes, their inherent nature in our collective consciousness, she proceeds to draw on film lore, and her final calculations and execution bear her out. Elliptical, almost plotless, without a grand thesis, yet almost mythical, All is Forgiven tells us a story of such surprising immediacy and detail that we will remember the names and faces, flaws and all, for a long, long time. A lifetime.