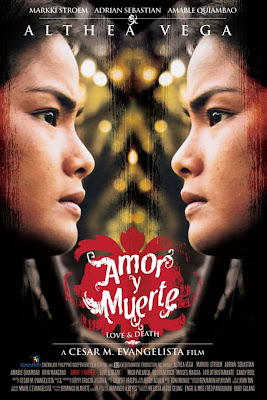 There is more than a titillating hint that Amor Y Muerte is meant to be a vehicle for the exploitation of Althea Vega’s shapely and buxomly body. The film is constructed in such a way that her character named Amor, a free-spirited native Tagala married to a repressive Spanish insulares named Diego in 16th century Bulacan, has multiple drawn-out sex with different men. Not only does Vega’s character have numerous steamy -- noisy, for everyone to hear -- bed scenes with her husband, she also has indiscretions with a g-stringed Tagalog native in every conceivable nook and cranny: there's even the all-but-compulsory moment against the backdrop of a cascading waterfall: "artistic sex," so must think its director. After all this sexual galore, however, one is left with a static and stagnant affair: its temporal setting is sketched with monotonous exposition; its mise-en-scene -- a few native houses in a leafy, watery rural backdrop in the Tagalog region -- is a given even to this day; but its thespian cast are acting tyros who can't shoulder the onus of authenticity necessary for this film.

These deficiencies are only symptomatic of the systemic failure of the film. The main crux of its problems seems to be undue diligence, its over-reliance on the fragmentary, unholistic literature from and about those times, as filtered through European eyes. Most, but not all, of what we know of precolonial times are derived from the handful of books left behind by Pigafetta and de Morga. These European prisms suspiciously appear to be what the film's researchers rigidly used as their frame of reference. Rizal's annotations may help to some degree, but it must be noted that our hero himself was not immune to his European education and imaginary. Thus a predisposition to exotica and Orientalism can be discernible in Evangelista's film.

Amor’s aunt, meanwhile, is another Christian convert but who secretly practices pagan convictions. She is also in cahoots with Amor’s father, a local rajah who conspires with Lakandula's revolt. Apitong, Amor’s lover, is an unthinking cipher who converts to Catholicism, and incriminates himself and Amor through a Christian confession. Here the native characters are either idiotic, treacherous, scheming or depraved, motivated with unvaryingly unsympathetic traits.

All of these details seem to create an intractable picture of the times. The characters are uniformly created as rebellious, but none of them show an ounce of redemptive quality. The motivations of Amor are inscrutable and contradictory in the way she professes love for her husband but is not beyond committing infidelity. Amor's father brazenly lies to his son-in-law about Lakandula's revolt and affirms that he is "his son" now. Amor's aunt double-deals even in matters of faith -- hinting at her sense of duplicity and expediency.

Amor Y Muerte repeats proud contemporary assertions that the pre-colonial natives were rebellious towards Spain, but that is only half the story. Pre-colonial natives also freely and willingly collaborated with them in order to battle common enemies. This film simplistically, one-dimensionally depicts those times. Meanwhile, the thrust of the movie is obviously elsewhere – towards the loins. Alongside the unnatural performances, a movie meant to have a handsome period and costume sweep descends into amateurism and bathos.

By the time, the movie winds up in a violent and bloody conclusion, there is less than a dramatic urgency to be felt and be moved by. Despite the omnipresence of sex and a smattering of violence, there is just too great a deal of lethargic action, not the least worsened by the somnolent delivery of dialogue -- whether in Spanish or Tagalog. The supposed rebellious freedom of its characters is thus ironically hampered, constrained by the lack of thespian capacity and presence.

Amor Y Muerte. Sex and violence, in other words, and then where are we? Even the ending – a freeze-frame in the middle of Amor’s vengeful wrath  -- is a sorry symptom of an overall directorial aporia.
Posted by Noli Manaig at 11:21 PM