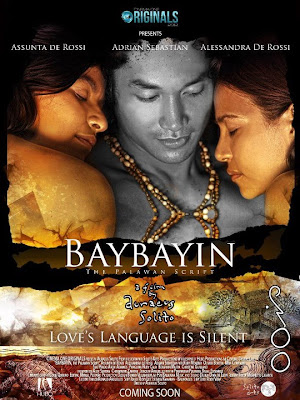 Auraeaus Solito’s Baybayin is a sumptuous feast of, and for, the senses. It's not merely an ocular-centric experience, but rather, a tactile, haptic, and sometimes auditory one for the viewer. Bringing to bear an intermodality of multiple sensory expressions, Baybayin demands a somatic engagement, which serves in good stead its representation of an indigenous people's culture as a living, breathing but dying organism. The film heavily invests in the paradigm of cinema as skin and touch, to borrow Thomas Elsaesser’s original term, in order to affirm its fierce attempt at modern mythopoesis of the endangered Palawan way of life.

If Busong replicates the superficial usage of skin in Philippine cinema and television – skin as the locus of stigmata, skin as the palimpsest on which social, cultural and individual and genetic ills and their repercussions are inscribed -- Baybayin celebrates the human body, particularly that of the native Palawan, as a canvas of calligraphy, a medium of haptic contact and communication, as well as a musical instrument, and the vessel of dreams and knowledge . Through sequences where living human skin – and also the surfaces of earth, nature's skin, like sand and bamboo -- is made virtual papyrus, its sensual, semantic, and cultural properties are passed on crucially like pieces of heirloom, but sometimes not unlike pieces of inscrutable and slippery hieroglyphs, from one native Palawan to another.

Focusing on the much ostracized and marginalized native Palawans like he did in Busong, Solito centers his narrative on Alba and Alban, daughters of a shamanistic Palawan woman and a French anthropologist, and Bagtik, a full-blooded Palawan whose muteness and deafness are compensated for by a proficiency in the dying Inbaloran script -- vital but ephemeral on the water-swept sands where he scrawls it in order to communicate. Orphaned by the death of their mother, Alba and Alban are made to separate, the former is taken to the West with her father and later educated in Manila, while the latter is brought up in their seaside village and rebuilds her life with Bagtik. The return of Alba years later coincides not so much with a happy idyll but with renewed depredations from outside.

Although teeming with images of pristine beaches and picturesque underwater, marine life, Baybayin elsewhere hints at the haptic exploitation of a people and their habitat. Baybayin dramatizes the hostile rupture of contact, the forfeiture of touch, based on the Palawan's mistrust and the outsiders' abuse and treachery. Religion, the influx of other ethnicities, and moneyed business -- all have conspired to push the indigenous people and their culture on the brink of extinction. The Christian pastor, for instance, demonizes Bagtik, pointing out the latter's somatic nakedness as the indexicality of the uncivilized. The military are mercenaries who do the bidding of foreign capitalists – even if that means grabbing the ancestral lands of natives. The American ex-marine hellbent on appropriating Palawan land and waters is marked with military tattoos, the conventional markings of unscrupulousness. (The Palawans, in contrast, are inscribed continually with the intimacy of bare fingers in a sanctification of the body, never to be marred with tattoos. Bodies are more like sacred mediums for messages and prophetic dreams. The tactile act they use in writing indicates the vitality of the culture, that it’s a living process of creation.)
Much of the narrative of Baybayin, however, is sadly often telegraphed, and the non-Palawan characters are mostly stereotypical ciphers, as if Solito has passed judgment on the greater world in a "we-versus-them" conflict. When the corrupt military man eyes Alba beadily, we know a rape scene is in the offing. When it becomes known that the gongs of the Palawans are valuable artifacts, you can guess exactly who will steal them. Solito seems singularly hypnotized by ink being imprinted on skin, script being scrawled on sand, like the obsessional bodily calligraphy in Peter Greenaway’s The Pillowbook or the bodily paintings in Mizoguchi’s Five Women Around Utamaro.

If Solito is fast becoming redundant -- the themes and characters of his last two films seem like mirror images of each other -- it is all in the service of his embattled people. Having said that, it takes profound courage, a pair of balls, to temper his tribal allegiances with much-needed rationalism and humanism, interrogating, for instance, the mindless binary oppositions of some Palawan folktales. (His neutralization of one about the privileged myna bird and the marginalized monkey is particularly instructive.)

Solito also draws on his own background to create an important character in his mythopoetry: patterned after himself, Alba represents the outside-educated advocate and defender, a refinement of the educated shaman in Busong. To Solito, Alba can be key to the survival of his dying cultural heritage, even if only in the realm of cinematic diegesis. Through acts that define her allegiances, she, a hybrid of foreign and indigenous blood distinguished by inter-racial features, eyes and skin, has started to facilitate a crucial socio-cultural syncretism. Towards the end, Solito also finds brave Darwinistic wit to forward the biological imperative and a sanctioned Palawan practice that will allow its dwindling kind to propagate and preserve itself.
Posted by Noli Manaig at 12:13 PM No comments: