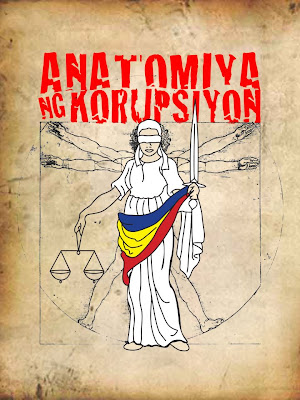 Expectations run high when a film like this attempts a portrait of such a monolithic subject as corruption. Anatomiya ng Korupsyon seems dressed for the part, as portentously titled as any picture put on screen, conjuring in our minds something epic and dramatic. Director Dennis Marasigan, however, has a reputation for making films of finesse and tempered sentiment, and sadly enough, in this film, he sticks too conservatively to his comfort zone.

As much as a public pillory is in order -- that carcass of corruption dragged out into the open -- Marasigan softpedals it. The subject he singles out -- shenanigans in a Marcos-era government office -- is handled all but daintily. Euphemistically. Marasigan seems too much of a nice guy to fight fire with fire. He all but says, excuse me, before he skewers his quarry.

In Anatomiya ng Korupsyon, Marasigan hides more than he shows -- often to our dismay. Perhaps we are expecting an expose, while Marasigan presumes his subject to be a fait accompli. For instance, he gives us a scene where a government clerk with a deck of playing cards proposes a game to an officemate, but Marasigan just as soon cuts away. It is an opportunity fraught with possibilities that goes begging. We get it, but Marasigan approaches it with control and restraint, and consummates what the scene is about off screen.

Restraint, obviously, is not bad in itself. And there are those who like Anatomiya the way it is. But sometimes this film doesn't need it. Sometimes it needs to loosen its reins for fear of asphyxiation. Following through on its potentially humorous moments will only improve the synergy of its parts.

Few filmmakers like Bresson (L'Argent) can pull off what Marasigan is trying to do, a tight-lipped treatment of a massive theme like corruption. As it is, Marasigan is doing Frank Capra material with Bressonian seriousness and deadpan. Here, its main protagonist, Cely Martinez, a new, idealistic lawyer appointed to the Family Court, is the picture of deadpan, to the point of making her seem more soulless than the lively corrupt government officials that surround her. (It might be argued that that is precisely the point: Corruption has been naturalized.)

That is the kind of ambiguity and uncertainty marring this film. When dealing with its humorous moments, it also gets bogged down by its oscillation between parody and satire. Parody, for instance, is a shot of an office drawer stocked full of merchandize like cigarettes and candy. We don’t laugh. It’s old and there is no riff on it.

Satire, on the other hand, is what happens when a corrupt clerk actively hides a folder of documents on a disordered desk in order to delay their delivery and therefore cause more bureaucratic grease money. Now this image is fresh and we react accordingly. In terms of parody, Anatomiya does not present anything new, nor does it reinvent its images. With its satire, the film scores points by ridiculing, for instance, the actions of the misguided clerk. Why satire is not sustained all along, one can only suspect that the material has not been thoroughly developed.

Ambiguity also attends the depiction of corrupt superiors in Anatomiya. They do not come across as villains. They are almost too clean and mild-mannered. They don’t wallow in luxury and money. They are almost understanding, nice guys, giving the newcomer all the leeway she needs. Perhaps it is all intended to depict a new kind of culpability, but their lot looks more naturally life-like than the film’s supposed heroine.

If I'm somewhat disappointed with Anatomiya ng Korupsyon, it is because the film is not half bad. Marasigan is a well-meaning filmmaker who has proven himself in this vein before, but this time, he has in his hands a work in progress. Perhaps he ought to look at his film’s ending first. Out of nowhere, it equates an idealistic and incorruptible character like Cely Martinez with someone like Jun Lozada, someone who is not exactly beyond reproach. While the likes of Cely Martinez eat insipid cafeteria food under a mocking poster of La Dolce Vita, the likes of Lozada are luxuriating in a club house in some exclusive subdivision. And what of the staggeringly cynical line that Anatomiya takes from Lozada – how he was tasked to "moderate the greed” of public officials – are there gradations of greed then? Is corruption, and the guilt born out of it, a matter of negotiation now?