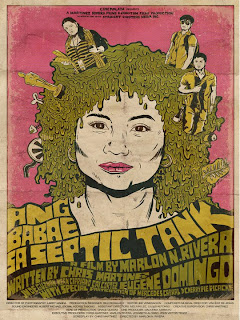 The word of mouth is right on the money. Marlon Rivera’s first feature film, Ang Babae Sa Septic Tank, is as uproariously enjoyable as promised.  This metafilm of sorts turns the cameras around on the most unlikely yet most logical subject: the indie filmmaking scene. If there is an absence of documentaries on it, this should be the next best thing.

The concept is hardly new. There are plenty of examples in this full-fledged cycle: Truffaut's Day For Night, Kiarostami's Close-Up/Through the Olive Trees, Wajda's Everything For Sale and hereabouts, Raya Martin's Next Attraction. What distinguishes Rivera’s film from such rarefied company, however, is its irreverent, iconoclastic take on its hapless topics.

The storytelling too is unconventional and ludic.  Familiar figures, situations and aspirations identified with indie filmlore come in for satire and parody. This film leaps and gambols with a fusion of reality and fantasy. To the educated eye, it reprises iconic images and sequences from certain indie films of the not so distant past. No one escapes the tongue-in-cheek and sometimes abrasive skewering.
Right from the start, Ang Babae throws us for a loop. We are unwittingly immersed in a film within a film. A youthful voice-over maps out sequences of a shoot. He is, in fact, thinking aloud, fleshing out the mise-en-scene. An establishing shot shows mountainous piles of garbage. Then it cuts to an indigent mother and her brood of children. She is ladling noodle soup for them. Camera cuts to her bathing one of her pre-pubescent daughters. A few cuts later, mother and child are in a hotel knocking on the door of an old Caucasian man. The child is being pimped to a pedophile.
The title of the projected film is Walang-Wala, an inspired and risible tagline that comes in for many milkings. Then the camera cuts to the film proper: the voice-over belongs to Rainier, a young director with grand cinematic dreams. He is in a car, brainstorming with his producer, who serves as driver, and their assistant, a plump girl who forever fantasizes about making domestic musicals, although her visions look like a pastiche of Foster Child, Mondo Manila Motherfuckers and Ang Pagdadalaga ni Maximo Oliveiros.
They brainstorm from pillar to post. At a cafe, they dream big, brainstorm further, and in between begrudge an indie director whose film has caused a sensation in a festival in Venice.  As if on cue, the director in question shows up with his retinue. This part is among the most risibly draining moments of the film. The crowd seems well attuned to this stereotypical figure, a country-yokel type with bad grammar and unsophisticated ways. Expresso is what he wants to order at the café.

But the best laughs are still in the offing. As the brainstorming goes back and forth, the three upstarts start to hit upon increasingly outrageous ideas. It soon becomes clear how wrongly advised and wrongly motivated they are. For instance, their choices to play the poor mother seesaw among Eugene Domingo, Mercedes Cabral and Cherry Pie Picache, with uproariously unprincipled justifications. They are indeed thinking out too loud for comfort. Scouting their location, they discover a perfect spot, a panorama of sprawling garbage dumps and burgeoning slums, a setting that they imagine would give them a masterpiece, until they plummet down to earth, seeing their car burglarized.
The virtuoso of the film remains, hands down, Eugene Domingo. She commands the last act with her inimitable comic act. When the filmmakers show up at the comedian’s house to secure her participation in their film, we see a sophisticated home, complete with body guards, assistants and personal trainers. They are welcomed by a well-coiffed and well-attired Eugene, a picture of flamboyance and primadonna-like airs. Her moments are effortlessly pitch-perfect and excel the funniest bits of Kimmi Dora. She is a walking satire all her own, at the expense of her own screen persona.  Her performance is better seen than paraphrased here. The moment in the septic tank caps off her triumph: she still comes up smelling like roses.
Hats off to Rivera whose film doesn’t disappoint. Ang Babae is at once entertaining and revelatory on a sometimes-nurturing, sometimes-cutthroat film industry. The shifts between light comedy and ferocious satire, however, ensure that we will never be too sure about this perspective we are afforded. One thing is certain, when a self-referential film like this gets made, it’s a sure sign that indie filmmaking in the country is alive and well.  When it’s as well-made as this, it is no longer just homage, but a legitimate film standing on its own.
Posted by Noli Manaig at 9:02 PM