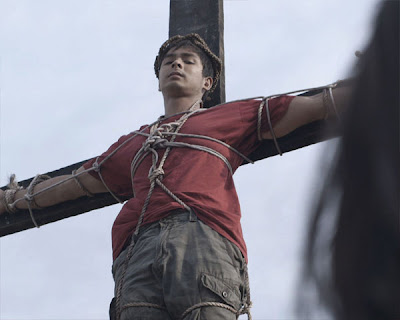 The stance of anticlericalism is a rare thing in the movies. For a filmmaker, it is akin to a granitic rock he picks up and bludgeons his head with. Pressure groups, the so-called guardians of morality, not to mention the church, are bound to scuttle his film and even threaten excommunication. Luis Bunuel was the odd one, the single biggest filmmaker the Christian Church has ever had for an opponent. Films such as L’Age d’Or and Viridiana attest to the surreal and artful means the Spanish master employed to skewer organized religion. Fast forward to the present and Emmanuel Quindo Palo has taken the cue from this precedent, venting his own hurts and heresies against the Church through his feature debut. Unlike Bunuel’s sophisticated broadsides, however, Palo’s mouthpiece is astonishingly the fervor of a layman -- and how he holds his own!

The story Santa Nina tells is striking but not unfamiliar: premised on the discovery of an uncorrupted young girl’s corpse in the lahar-laden wastelands of Pampanga. In the scramble for safety during Mt. Pinatubo’s eruption many years earlier, Marikit’s coffin had been swept away and got buried in volcanic material. The girl’s father, Pol, a man who has amends to make with the Church and with a deeply moralistic society, sees his child’s return as a sign of God’s forgiveness.

At this point the film pays homage to Bernal’s Himala as the illustrious corpse of Marikit becomes a kind of holy relic. We see the droves of the sick and the faithful making the pilgrimage to Pol’s house. And we see the cottage industries that sprout around it. Even the governor and his wife are soon believers bestowed with healing; Pol’s own senile mother has become lucid once again. Pol's estranged marriage also undergoes amelioration.

When testimonies to the miraculous powers of the corpse start to spread, Pol becomes bullish and dares to believe that out of his sinful loins, he has fathered a saint. Here the scenes turn into reverse catechism, as Pol confronts religious leaders about his religious doubts and his fervent wish for his daughter. Basic and common-sense questions about doctrines go begging here. The film has to be watched if only for these seemingly simple-minded but potent questions. Pol’s words are as fiery as those of a scorned figure, and one by one the parish priest, Pol’s sister, a nun, and the archbishop of San Fernando fail to dissuade him. True, canonization is easier said than done, entailing a bureaucratic logjam, but all fail to argue against the simple logic of this layman.  Pol, however, makes silent and outspoken converts of some of his doubters, even among the ranks of the Church.

That religious skepticism, if not mischief, was on the mind of the filmmaker is when it handpicked Leo Martinez --- a comedian who often portrays corrupt politicians and rich, womanizing fat cats – to play the archbishop. His devilish typecast is not lost upon us. True enough, his archbishop hems and haws, a figure of fun, while Pol is not unlike Pasolini’s ferocious Jesus. Sister Madel meanwhile argues in favor of the layman, not unlike a layman, while decked in the vestments of the Church.

That Santa Nina has ultimately a conciliatory and seemingly submissive ending, that Pol swallows his own rebellious voice, that he undertakes Lenten crucifixion, may be Palo’s way of hedging his heresies. And perhaps, he must calculate and not push the Church to the rearguard. The Church should be made to think of its high ground, its magnanimity, its co-option of the film’s dramatic dissension. Even so, even as the holy relic proves to be an illusion, the gospel of Pol is now out there, spreading from mouth to mouth.