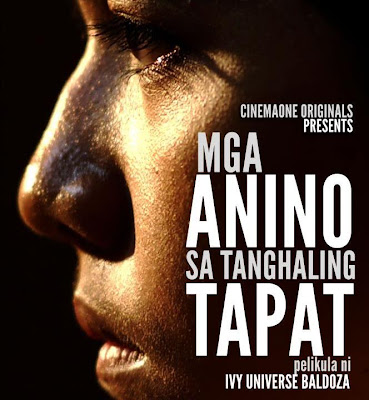 The shadows at noon, they have always been there...

These dark, penumbral undercurrents sneak up on the viewer. They stalk the center, where three girls rush to embrace the advent of adolescence. On the cusp of full-fledged bodies, these girls anticipate it with a sense of wonder and headiness. Baldoza’s film is meant to foreshadow the collision of changes – spiritual, intellectual and physiological – in the lives of its characters: a personal testimony that reminds us how fraught with distress, as much as happiness, this stage in life can be.
These girls are the newly adolescent. Their flowering is headlong, and complacent. They embrace the latitude of their young age, but ignore the fine print that comes with it. They handle sex as an unfamiliar apparatus, in different stages of clumsiness and callowness. They are tempting fate, a fate that memorializes them in various stages of maturation. You can all but draw a schema. Thus there is a reason to read a symbolic subtext into their destinies.
Much mystifies the illustration of the three girls’ lives. There is a biblical fatality in their quest for knowledge, more so that they are oblivious and uncalculating, myopically curious and caught up with the turning of their bodies. They meet at the wake of their grandfather in a bucolic province. Ines is an urban adolescent who is curious about her family secrets, wanting to come to terms with her mother’s past. Odessa is a provincial lass who is experiencing the bloody bodily changes of adolescence, and savoring in turn the sight of a boy bathing half-clad. And Ezra, her elder sister, frontally and boldly faces the urges within her, sexual and sensual.
Their fable is framed by a rural superstition about the contagion of death. When someone dies, it is said, a relative should refuse overtures that occur in their dreams, or be the next to die. You never realize how significant this line is until the chilling, haunting end. In the meantime, there is beauty in how the literal and the symbolic are inextricably intertwined in this allegorical piece.
The vulnerabilities of the girls are illustrated by the story of Ines and her impressionability to the supernatural. Appearing to her in a kind of dream, spirits of the forest proposition her in exchange for the secrets about her mother. She gravitates to them and their mysteries, perhaps even in her waking moments. Yet she is not even the most susceptible.
At every turn rears the mystery of life and sex and death, their symbolic interconnectedness. You can, however, read this film as both allegorical and actual and there is plenty to spare; that is its singular achievement. You can range far from folklore to Freud and not explain this film away, or you can dwell on the everyday in which it is set. These are the transpositions and juxtapositions that Baldoza makes possible in this unlikely coming of age film.
Mga Anino Sa Tanghaling Tapat is a film that starts quite generically but ends up strong and indelibly. The makings of a family drama at the start give way to an unforgettable fable that crisscrosses genres and realities. It is no simple achievement, juggling the various elements mentioned above without taxing our sense of enthrallment. Adept as any fabulist, Baldoza strikes a commendable, careful balance, creating a film that ought to garner a viewership. Whether adolescents should see it, perhaps they ought to. Although the strong imagery may preclude it, the film's message is a kind of caveat to youth that recommends itself. But I doubt, in this all too literal and prudish country, their hysterical, blushing mothers would allow it.