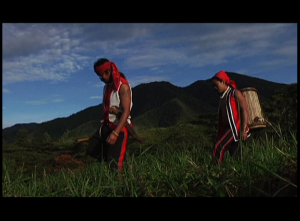 What is simultaneously baffling and beguiling early on in  Regiben Romana’s Sakay Sa Hangin is the fact that it can be approached as a kind of anthropological document as much as it can be understood as a myth of its own making. Multivocal, multivalent, it puts us in touch with the daily rituals, ceremonies and customs of the Talaandig tribe in Bukidnon, Mindanao, while following and observing the preparations of a man who is about to embark on a mythic journey. The journey should be taken on the back of a saduk (a wind-blown vessel), an oracle declares to him, an utterance that engages fact with fictive myth.
The man who must undertake this voyage is Gali, a devout man of peace who, through the whisper of dreams, feels tasked to avert a great war. He seeks the audience of chanters and oracles to prepare the way, enlists his friend’s help, and gathers his family for final instructions. In the interim, we watch him, a great musician, in extended recitals as he plays instruments indigenous to his tribe – the flute, the lute, the jew’s harp. Out of scratch, he creates a talismanic bamboo woodwind: an instrument of power, a kind of weapon in foreign myths, as with Orpheus or Pan. Soon, to consecrate this instrument, he invokes the blessing of the spirits and gods of nature: the earth, the sun, the river, the rain.
On plain paper, this synopsis reads like the outlines of a myth. But in real terms, Romana executes it as a documentary with small touches that elevate it from factual gathering. As described above, the small touches are rooted in the Talaandig’s lore and their quotidian lives. For the musicians like Gali, for instance, it is normal to invoke the higher powers that govern his milieu, his musical instruments made out of the materials of nature.
Animism is a strong presence in the life of Gali and the tribe that he represents. Romana is even inclined to believe its reality transcends the scope of his film and even captured in it. While editing two-months-worth of material taken among the Talaandigs, a startling discovery occurred to him. Figures of heads and faces seemed to appear among the flora in his footages, something that he went on to “emphasize” as triangles in his film. Perhaps there is more to native beliefs than meets the eye.
Waway Saway, who plays Gali, however, claims the brighter spotlight. It is curious where Waway the musician ends, and Gali the character begins. With long, extended takes that document his every move and his every musical note, he commands us as a captive audience. He lulls us like a Pied Piper: when the end comes, the two-hour running time seems scarcely long enough.


That is not, however, to take away from the great achievement of Romana, rather it underscores the film's rich multivalence. Sakay Sa Hangin is a worthy ethnographic document of singular distinction. Few films -- Murnau's Tabu and the works of Flaherty perhaps -- can be compared with it through cinematic history. Sakay Sa Hangin, without didacticism, also retrieves our lost connection and communion with nature. Framed in an open-ended structure, the film demonstrates the flow of life and how it ought to be held sacred: war should not enter into it. And once we latch on to its lyrical imagery, its fabulous structure and spare storytelling, it is a breeze to watch. A breath-taking ride on the wind.
(Title in English: Wind-Blown)
Posted by Noli Manaig at 9:19 AM