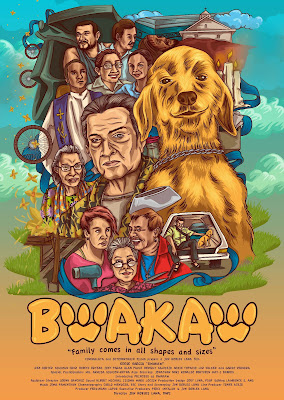 Advancing age does not sit well with Old Man Rene. The years have not been kind to him and have given him the patina of a grumpy, unhappy figure. Woe to anyone who dares cross him: the old man has a withering tongue and a mildly violent streak. Fierce in his solitude, he keeps many of his friends and neighbors at bay, and lives alone in a rickety ancestral dwelling. Here his sole companions are Bwakaw, a voracious, loyal stray, and if you can count it, a wooden sculpture of a supine Jesus that is said to be miraculously growing.

The crux of his unhappiness seems to stem from his unflaunted and secretive sexuality. When one of his friends, Zaldy, an aging but flamboyant parlorista, gives him first dibs on a couple of call boys, he sends them back with a stinging reprimand. The old man seems to be going through the motions of life. All that consumes him are the details of impending death: an empty coffin sits in his living room; his prized belongings are wrapped up and inscribed with the names of intended recipients; he obsessively revises a last will and testament that he entrusts to the parish priest. An encounter with a brusque and muscular tricycle driver named Sol, however, breaks down his grumpy, irascible exterior. Now the perpetual scowl has turned into secret smiles; the old man relents to a haircut and has his gray hair dyed.

While this premise is far from novel anymore, there is charm in the the small, aforementioned and still unmentioned details. They are all marshaled with great timing and pacing. While Lana’s script seems to have been cobbled together from a cycle of old-man films -- such as De Sica’s Umberto D. (about a man and his trusty dog), Kurosawa’s Ikiru (an existential fare about an old man finding meaning in the terminus of life), and even Bergman’s The Wild Strawberries (a lyrical surreal meditation on old age) and Sorin’s Bombon El Perro (about a man who finds inspiration and redemption from his dog) -- Bwakaw finds an alchemy through the bricolage of dialogue and characterization, if the foregoing paints a part of the picture.

A meditation on old age and death, Bwakaw is splendidly leavened by acerbic wit and rough humor. This often finds expression in brutal exchanges between Old Man Rene and the ensemble of absurdly comic characters around him. The overall tone remains light and bright. While there are plenty of references to sickness and death – e.g. someone keeps importuning Old Man Rene for an audience with the miraculous santo entierro on behalf of the sick, and fatal sickness surrounds the old man and ultimately strikes close to home – they contrast with and are eclipsed by the lively and robust and humorous characters. A moment of hilarity that thumbs its nose at death happens when Old Man Rene lies down in his coffin, and pretends death while his friends and neighbors walk in on him and start mourning.

The triumph of Jun Lana’s film is to serve up death in a marinade of humor, vitality, and indomitability. There is no treacle dripping from it; no cloying, sickly sweet aftertaste. None of the histrionics of dying, no heavenly kowtowing. Neither is Bwakaw a celebration of ghoulish morbidity and dark humor. Nor are the characters steeped in bitterness and cynicism. Even at the film's lowest moments, darkness does not enter into it. Like the titular dog, one must learn to seize even the scraps. Like the dog, one should be voracious for life.
Posted by Noli Manaig at 7:21 AM