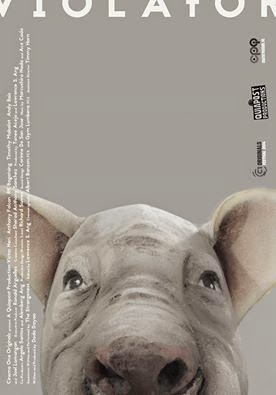 No causality, no teleology, but the spontaneity of evil. This is Violator's doubtful premise, or perhaps the pretended, ostensible premise. Evil happens, or in more colloquial terms: shit happens. Possibility: telos points towards hell, given how the picture ends portentously in carnage -- and perhaps its determinism, too, given how, at the start, the world is already half-eclipsed: semaphored by crushed shadows, images of rustwork and stormclouds and other minutiae of brooding, benighted atmosphericism. A world spiralling and hurtling towards apocalypse. Meanwhile, what the film considers its talismanic line -- on the order of "evil for evil's sake" -- is twice-told, repeated, spelled out with emphasis just to deny the possibility of ambiguity (Jadaone’s That Thing Called Tadhana cloyingly quotes F. Scott Fitzgerald twice for a more romantic purpose.).

One can make, however, a case for the causality of evil, despite the disclaimer of characters: evil can be traced to the opportunism of human power, as cops with guns, as cult leaders possessed with charisma and mystique, both evident here. Throw in natural catastrophes and paranormal hauntings in the background apropos of a new millennium (It's getting late for catastrophic end of millennia, though. This smokescreen is wearing thin) and you have a universal unravelling. With regard to the syntagm of "the spontaneity of evil," it can be taken as the nervous irony from the mouth of evildoers, a denial on the eve of inevitable doom and retribution, a euphemism for those to whom what goes around, comes around.

Storm clouds, deluges threaten on the horizon, the film forebodes at the start. A reminder that Mother Nature can be not so motherly after all, but decidedly, lopsidedly evil. Conflictual Nature, we have it in spades, but a conceit once too often resorted to. After all, the trajectory from Homo natura to Homo historia has long come and gone. (Not hereabouts, one may contend, but it remains an old chestnut that should remain windfallen.) Nature here is atmospherically not so neutral, a dark expressionism. Nature is black and Manichean evil, and to mix religions, this nature basks after theodicy, if such a thing exists. In Violator's world, things are post-Christian, but the supposed benevolence of God, or a despair for his immanence, is blasted symbolically in the form of brittle plaster figurines of  patron saints and the Holy Family lined up like hapless victims of execution, pulverized by the bullets of a dying police protagonist. Another index of residual religion: men immolate themselves as in some Eastern religions. And another: assorted suicides and cultists neatly mass-murder themselves according to fatal prophesy. Entropy is order.

Eschatology of evil, then, although Violator seems to blur, or intentionally confuse, a sense of natural calamity and paranormal or a kind of last judgment apocalypse for a precinctful of crooked cops. Well, these are all understandably obfuscatory devices of deferral in the film's process of becoming. Like retribution, like memories to haunt conscience, apparitions of dead cultists and those of other nameless spirits take their maddening turns. How much of it exists in the mind, how much is diegetically real? All part of its thesis on evil and its genre-bending slippages and machinations, one may suppose.

As befits genre conventions, Violator tries to ratchet up horror at the end, but the picture has somehow undercut itself. The horror is all but paradoxically dissipated with its shift from the general lay of the land to the specific -- that is, from an unpredictable, and thus unsettling, first half to a second half flood-bound in a police precinct, its crooked cops spooking each other by the numbers. Not even a demonic being who infiltrates the proceedings does the trick. It hardly helps when the blacks become more and more crushed, to the point of blinking, stuttering darkness in the thick of a no-exit ending. My eyes glaze and get rheumy with this kind of exaction, this taxation of vision, as in the case of Hindi Sila Tatanda. But if nothing else, early on -- that is, the first half of the film -- Violator has cinematic moments of sheer cogency (take immolation, take videographic footage of cult proceedings) that creepily blindside you as it can simultaneously depict elements of horror Japanese-style -- otherwise the picture can get somewhat, well, dim.

PS. Wrote this long ago when the film first came out, but I'm still wondering what a known, staunch partisan/ a bosom buddy of the filmmaker was doing on the board of judges. Ethical propriety hereabouts, I guess, is just a suggestion, not a moral injunction.
Posted by Noli Manaig at 11:15 AM