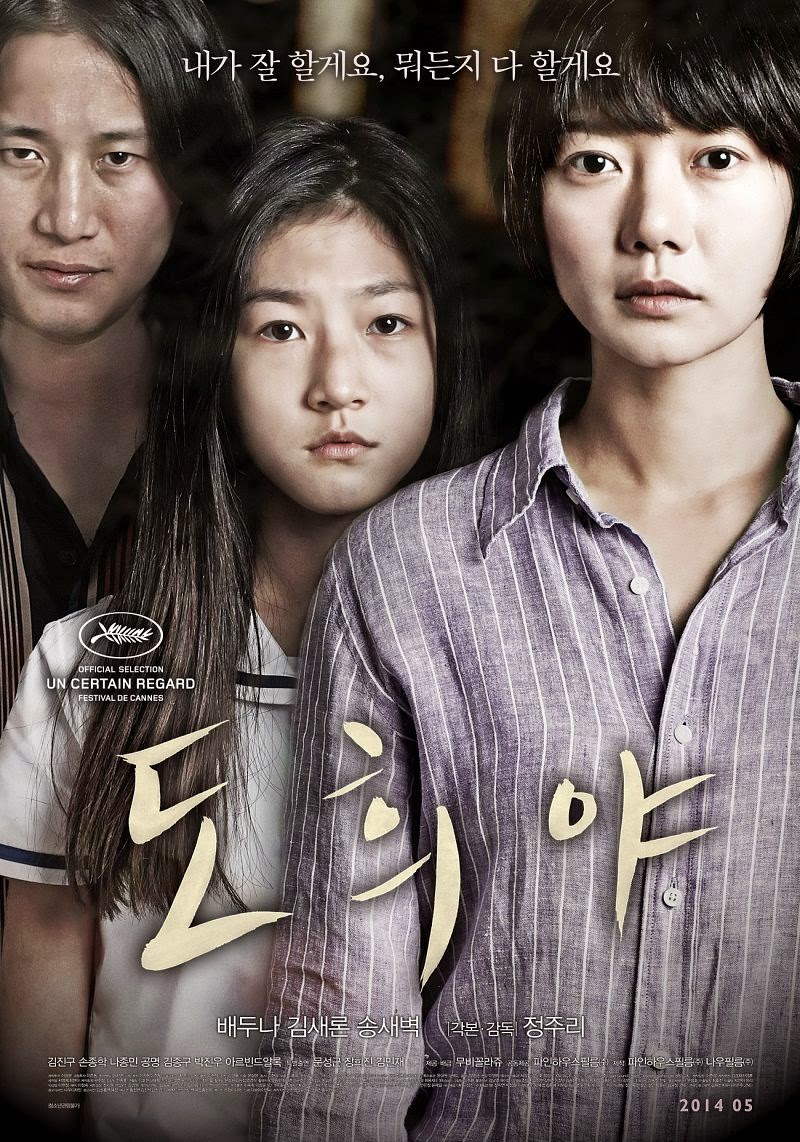 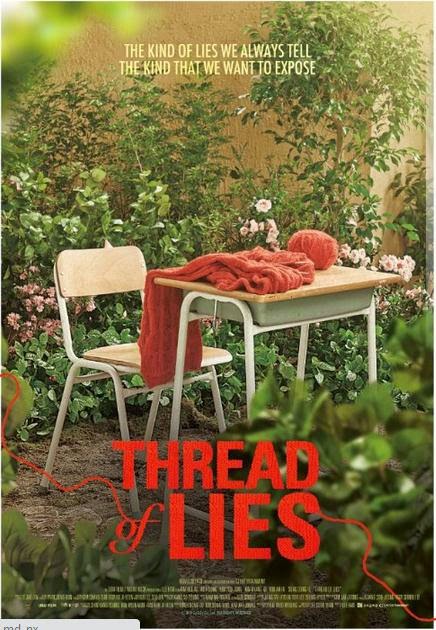 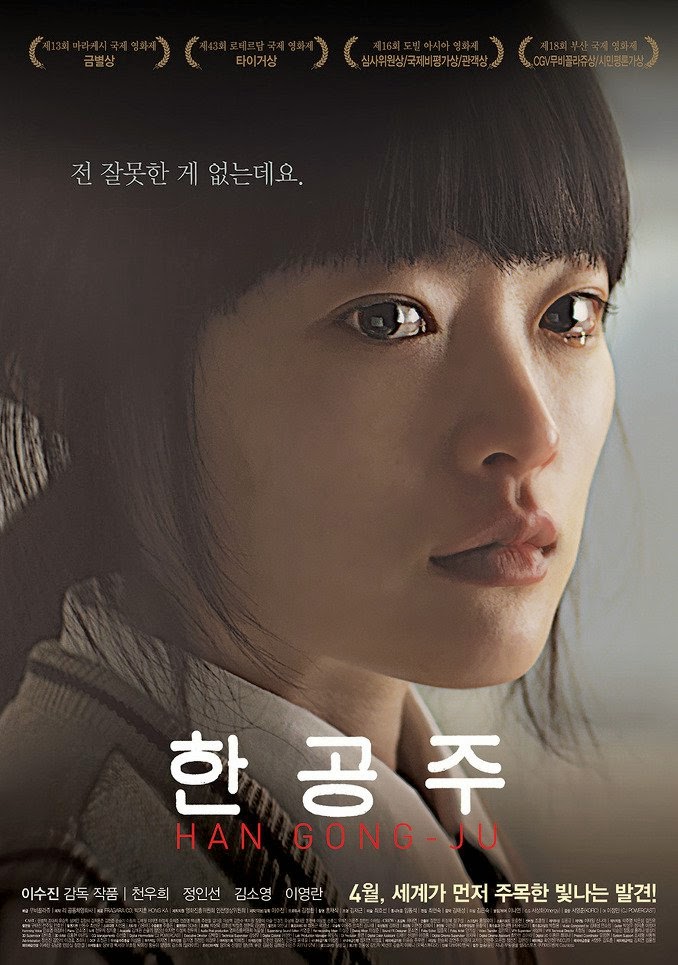 Let me say at the outset, my knowledge and appreciation of South Korean culture can at best be described as fragmentary, that of a dilettante. Yes, I’ve visited the country in the past, but it was just that, a sojourn that was always never close enough for the purposes of a full acculturation. Some aspects of what I have experienced appeal to me more than others. Bulgogi is sweet and tender, soju is bracing, but the telenovella and K-pop, no matter what splash Fil-Korean Sandara Park seems to be creating as a singer, cut no ice with me. My strongest affinity, for now, starts and concludes with the country’s art-house films.

Lately catching up on some of last years’s films, I came across this cluster of dramas, quick and random choices, that thematize what it is like to be a young Korean girl. Curiously, by some tell-tale coincidence, they seem to be performatively saying and meaning the same things with dire univocal repercussions. All revolving around young female protagonists – around the ages of 13-15 years old -- these films show an onerous subject formation that traumatizes, stigmatizes, and ultimately drives their protagonists to a point of no return.

In a society that preens itself on a long-held claim of modernity, where phallicism ostensibly has for many generations not excluded female genitalia, is there really a legitimate whisper for help regarding the brutalization of young adolescent girls? Do these films suggest the groundswell for the return of the repressed -- that is of the need for authoritarianism once experienced in the country's history? Or is it the other way around, given the wayward adult figures in this film? Or are these perhaps mere coincidental fabulations of cinema in a country so progressive it's run by a female president? (Having said that, female president notwithstanding, it doesn't necessarily invalidate the premise of these films either. One has to ask incredulously again: Where does the sudden topos of beleaguered adolescents come from? Is it just a manifestation of presentational, that is, prioric art?)

A Girl at My Door features a young, adolescent Do-Hee who suffers corporal and verbal violence at the hands of her step parents. Han Gong-Ju tells the eponymous story of a teenager who is, this time, gang-raped by several dozen teenagers right in her home. Thread of Lies weaves the affecting tale, told in mixed tones, of Cheon-Ji who is driven to suicide by school bullying and the seeming neglect of those nearest to her.

In varying shades of desperation, they reveal, if they are based on the empirical and more than just anecdotal, the issues that fissure the upbringing and makeup of young Korean girls. Young male teenagers seem to act with entitlement and impunity -- abetted, it seems, by permissive parents.

And the invariable response seems to be a drastic one. Although she is shown to be a free spirit who enjoys to dance by the breakwater, Do-Hee, always bangs her head, irrationally, against the wall as if wanting to atomize herself whenever she realizes her situation in life. There is little succor for her, unless a deus-ex-machina is mercifully inserted into the proceedings.

Cheon-Ji is a thoughtful young girl who is made the butt of jokes, the butt of hectoring and psychical violence, alternating with being an object of indifference. As all this unfolds, told in flashbacks that immortalize her, she is all too introspectively aware of her problematic milieu that she checks out volume after volume on self-help and psychology from the school library. Preparing her suicide carefully, she has the most courteous and dignified reproach to her family and tormentors.

Not with dissimilarity, Han Gong-Ju realizes early on -- although she is whisked away to a more silent town, seemingly a more insulated place away from the juridical proceedings -- that the situation will only come to a head. She ineptly practices swimming lessons for the denouement that she foresees for herself. At a crucial moment of conjuncture and desperation, she will be made to choose whether to throw herself into a river.

Two kinds of unduly privileged men and young men become apparent here. Those who are quick to inflict violence – the step father (along with her step grandmother) of Do-Hee who make her black and blue all over and the young gang-rapists of Han Gong-Ju. But the presence is just as apparent as the absence. Do-Hee, Han Gong-Ju and Cheon-Ji are all but without father figures - - fugitive or merely absent -- with Do-Hee all but an orphan who will latch on to the kindness of strangers. The majority of the other parents and adults posited by these three films, meanwhile, are all neglectful and thus enablers of a dangerous vacuum by their absence. The mob rule of the gang-rapists' parents that almost lynches Han Gong-Ju is also disinhibited and telling here.

Present-day surveys indicate that South Korea is fast becoming a decidedly atheistic society – the numbers range from 40-50 % of the population -- and these three films seem to attest to a growing measure of anomie and nihilism, presumably filling in the void left by religion. They seem to ask for a spiritual ballast, a guiding direction beyond the blind and desperate anti-solution of self-annihilation. It makes us wonder what Slavoj Zizek, who visited the country last year, had to say about the psychoanalytic imaginary of  the country and the seeming dialectical condition between the sexes -- a dialectic, not an alternation, between yin and yang, if you will -- faced by Korean women had he been asked on the urgent subject. Then again psychoanalysis, of which the Slovenian philosopher is a master juggler, has always been centered on oedipalization – the formation of male psyches from boyhood into adulthood. No room for the distaff side at all. Small wonder then they invited the Elvis of Philosophy over -- maybe even, in the process, to win over the womenfolk to oedipal hegemony.