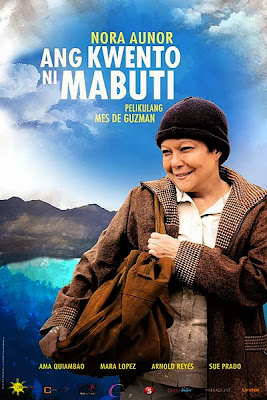 Money connotes evil. Not just that, money has come to denote evil. Entirely evil. Lopsidedly that is how Robert Bresson coldly dissects the figure and presence of money in L'Argent: a manipulative demon with its accompanying materialist ideology, a trail of murder and crime lying in its wake. Nothing good can come out of it: money reeks. Enter Ang Kwento ni Mabuti, a film that reimagines this signifier of sin, repurposing money for yet another intention. The old aura of money seems to invert and shift colors in this new and commendable film by Mes de Guzman: foregrounding the question of what is virtuous in a world where nothing is unalloyed, where ethical and moral absolutes are a pipe dream even for utopians among us. Here many of the dependent characters are deeply flawed and face an unpromising earthly future, their sins wearing out their originality and mortality, by the time the virtuous Mabuti is placed in the hot seat, tested by poverty's ineluctable problem and a bagful of money.

In its searching of worldly deliverance, Ang Kuwento ni Mabuti is not unlike an old morality play, where its title character has an agon with her sense of right and wrong, whether it will serve an individual or a social good (at least her own society), but the stakes are less otherworldly and sublime, more immediate and mundane: terrestrial salvation. Forget the world to come, it seems to imply. Pragmaticism and consequentialism are not untenable, it whispers. Mabuti must read the fine print that comes with the money and the semaphores of circumstance: isn't it value neutral?


All but a truism to say that everything Nora Aunor touches turns, even from dross, into gold: the alchemy of Mabuti is no exception. Nora lends tremendous cachet to it by her stellar thespian presence, reaffirmed here with understated perfomance in the Ilocano idiom. But what must be equally recognized is how Mes de Guzman’s authorial achievement lays equal claim to this movie, based on a story he wrote some time ago without an explicit wish of making it into a medium for a Nora Aunor. Everyone around de Guzman, however, simply couldn’t help discerning the bright adumbration of the great actress in the role of Mabuti. De Guzman kept his fingers crossed and one day, with a connection made and consummated, she simply showed up on the set.

Ang Kuwento ni Mabuti may present a scenario so well-trodden as to be negligible -- how to transform the matter of money, the crux of conscience? -- but de Guzman handles it in such a way that we simultaneously shake and nod our heads by the time his film concludes. Chances are, most will agree with its signals of predestiny, but not without a sneaking question left hanging silently somewhere within. But it is all part and parcel of Mabuti’s own passion. Along the way, she, like a pilgrim in progress, is tested and tempted, and when we suspect coming on an obligatory Christian ending, de Guzman inverts the influence of religion: Mabuti’s own definition of virtue comes to the fore. Remember how the devilish son gets thwarted time and again in de Guzman’s earlier film, Diablo? This time the progress of Mabuti’s journeys gets often interrupted, but all is stoically shouldered. That is Mabuti’s deceptive grace. Mabuti, like a ministering saint, fields and keeps the needy under her wings: the daughters of her errant daughter, the equally cavalier and wayward son, and the many neighbors who need her faith and shamanic succor.

But in greater moral terms, if Bresson fingers money as filthy lucre, passed around as a gun in a genuine Russian roulette, de Guzman elevates the matter of money beyond something like a Kantian category, although we might be convinced we are trapped in one with all the crookedness and immorality surrounding Mabuti. Perhaps when, in the hardscrabble, poverty-stricken life that must be waged in the mountains of Nueva Vizcaya – where Communist insurgency remains; bankrobbers, too -- Mabuti’s countenance seems to change at the sight of money, hinting at the vortex it represents, money that's not rightfully hers, the dangers of fate she thinks are playing tricks on her prove to be self-perpetuating and self-terminating. Fate seems here to tempt and ultimately withhold its own dangers and risks. That is perhaps, the one of two knocks on the film - along with its raft of piggybacking characters. -- Or is it simply the nature of fate?

Mabuti, in this sense, is the incarnation of sainthood made pragmatically attuned to the times. Far from a daughter who has children by many different men, a son who adds another, Nora's Mabuti remains resilient and earnest reminiscent of a Giulietta Massina through it all: she has a shy smile behind a dusky and weathered exterior. When not minding her many granddaughters, she has always enough time – the patience of a saint -- to dispel the incessant threat of rabies and venom with some spit and her magical poison-sucking stones.

Local color proves both bane and boon for the film: the mostly non-professional characters, Novo Vizcayanos, come off as mostly wooden if you speak their language, but they also have the unique presence, the sui generis, to enchant you by their strangeness – even as de Guzman makes no secret of his enthusiasm for his home province, his intent to democratize filmmaking in those parts. Sometimes, however, the movie's stab at equal opportunity threatens to spin off to many loose ends and subplots that divert with their seeming function of dedramatized anthropology. On the other hand, indigenous details may divert in a good way -- e.g. the playthings of the forest, the sumpak, the proliferation of shops for secondhand clothes or wag-wag stores, the corruption of local officials with jueteng, the many military checkpoints, the superstitions around faith healers. Somehow, it all works -- all accretes to texture. Forget how de Guzman passes off the town of Aritao as a city, because these are the ramifications of a journey of fate where, from de Guzman’s perspective, nothing is simply as it seems. Even as Nora has expressed an earnest interest in a film about villainy, the seeds of evil have been subtly planted here, only justified with a benevolent end, deep within Mabuti's bosom. Think about it. Light, after all, may never occur without its underside of shadow.