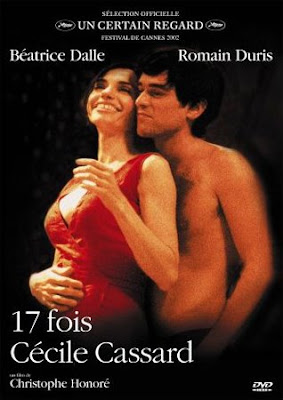 Christophe Honoré‘s 17 Fois Cécile Cassard is a film encompassing 17 fragments in the life of its title hero, a disconsolate widow who can’t seem to overcome her husband’s suicide. It is not a selfish suicide but one of self-sacrifice – in order to secure her future and their son’s with insurance money. As her sense of bereavement, however, becomes too much, she becomes incapable of living from day to day and taking care of her son. She must leave everything behind – her hometown of Tours, her friends, her son – and embark on a journey of consolation and renewal.

Through 17 moments that trace a trajectory from grief to recovery, Honoré dramatizes a familiar story and perhaps a personal, autobiographical one, dedicated to the director's parents. By no means, however, do these fragments -- stylized and aestheticized -- form a clear-cut and conventional story. There is a suffocating sense of unreality to the proceedings: the characters Cécile Cassard meets along the way may not be mere people but abstractions incarnate; his final destination, Toulouse, seems like an allegorical city. Much of the film is drenched in the atmospherics of darkness and stasis complemented by soundscapes that reflect the inner states of the film’s widowed protagonist. Great distortions and noise in the tradition of My Bloody Valentine suffuse much of the soundtrack.

Another promising alumnus of Cahiers du Cinéma – a part of the second generation after Godard, Truffaut and company? — Christophe Honoré fashions out a brave and bold debut, a film that doesn’t so much take its cue from traditional plotting as it does from the gradual processes of life. We see the gradations from loss to renewal unfold as they should, with compact and quiet tonalities.

Honoré takes away the literalness of the film's theme and subjects, and grounds them in a defamiliarized milieu. Toulouse, viewed through the prism of endless nights and dark emotions, becomes a kind of purgatory, populated almost exclusively by homosexuals, who are our world’s wretched, after all, consigned to a kind of social limbo. Honoré is unflinching in depicting homoerotic acts, the maddened men and their maddening sexual desires, as though to hint at the city’s psychical and emotional turbulence.

Toulouse under a dark night is the film’s overarching presence, but the characters here provide a noteworthy counterpoint. Béatrice Dalle is sufficiently understated -- no chewing the atmospheric scenery here -- as Cécile Cassard. Romain Duris (L’Auberge Espagnole), who plays Matthieu, the gay man with a compassionate heart, however, steals the spotlight. Notable is the scene where he, barely clad in a thong, performs a number from Jacques Demy’s Lola. Although he is involved with another gay man, Matthieu has love to spare for Cécile and perhaps to everyone else who needs succor. Matthieu is like a consoling mother, a principle of nature, who promises to give Cécile another son. Perhaps, just perhaps, the night is lifting, the music is taking a redemptive turn.

Reviewed: June 10, 2009 (Northern Portrait/The Persistence of Vision)
Posted by Noli Manaig at 5:59 AM