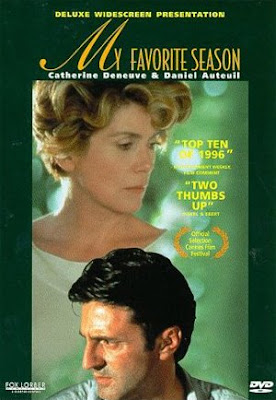 A quick advisory to the domestic filmgoer weaned on commercial fare: André Téchiné’s Ma Saison Préférée (My Favorite Season) will surprise and confound you who might still relish the old Filipino paradigm of family dramas – the oversentimental, the histrionic, the overdramatized kind. Téchiné’s film, instead, depicts a portrait of a dysfunctional family without the emotional and cathartic excesses. Family tensions and antagonisms here are negotiated with such sophistication and elegance that one comes away from it with warm, ennobled feelings.

André Téchiné’s Ma Saison Préférée, a film about cherished memories and idealized pasts, is also a film about misrecognitions: we don’t see from one set of lenses, and therefore don’t see an experience identically. In Téchiné’s shorthand, the seasons simply stand for memory’s mnemonics. Summer beguiles the film’s characters, middle-aged siblings, Emilie (Catherine Deneuve) and Antoine (Daniel Auteuil), for instance, not for the warmth of the sun and days in the park, but for something each of them separately knows.

Some of this film's characters, however, cling too fiercely to their shared memories, jealously guarding not just these memories but those with whom they experienced those special moments – to the point of everyone else’s exclusion. At such times, these memories verge on the pathologic, verge on murking their pure waters.

Such memories, such ties, tangled and obsessive, lie at the heart of Téchiné’s film. It starts with a premise that seems harmless enough: a family gathering around a mother’s incipient old age and widowhood, but it’s a family, as the story unfolds, freighted with curious bonds.

Adopted into daughter Emilie's home as a result of her incapacitation, Berthe seems ill at ease in her new domicile. Things hint at the incongruous as Emilie finds her mother muttering to herself in the dark at ungodly hours of the night. Is it her infirmities, her unfamiliar surroundings, that make her an unsettled member of the household? When Antoine, Berthe's youngest son, visits for Christmas, the central twist slips in: it rekindles the tight-knit closeness between Emilie and him. Berthe, meanwhile, seems especially responsive to her son, to the detriment of Emilie's family. Family romance, yes – in a way.

Emilie, a prospering lawyer, and Antoine, a brain surgeon, are seemingly well-adjusted professionals on the surface. But the quirks soon start to show: we find Antoine muttering to himself in the restroom a stream of mantras redolent of psychoanalysis. While Emilie vents her unsettled, sexual emotions on a stranger on a park bench. Emilie and Antoine are in the thick of reevaluating their relationship, their unusual closeness borne out of an intimate childhood. Emilie seems more sure of what it all means, but Antoine seems to value it differently. He seems to dance attendance around her at every chance. And perhaps it explains why Antoine doesn’t see eye to eye with Emilie’s husband.

Berthe, as the film culminates, reconnects more pronouncedly with her own children. A brief but memorable sequence shows the three together on the road recreating their happy journeys in childhood, Emilie and Antoine singing humorous nursery songs. They seem fleetingly happy. They go on along their magical itinerary, retrieving their magical past. Family romance, yes – in a way.

Ma Saison Préférée adroitly and tastefully renders Antoine and Emilie’s potentially incestuous relationship. Director André Téchiné, who also wrote the screenplay, sidesteps a polemical outcome with assured subtle and lyrical direction, mixing solemn and comic moments. (His light touch gives this film a funny sense of gallows humor at times, as evidenced by Antoine’s suicide attempt.) Téchiné's relish for unorthodox relationships, as films like The Wild Reeds would bear out, is in evidence yet again. Ma Saison Préférée, despite its delicate theme, ends with warm, rarefied feelings. All without the emotional manipulation and exhaustion we are accustomed to.

Title in English: My Favorite Season