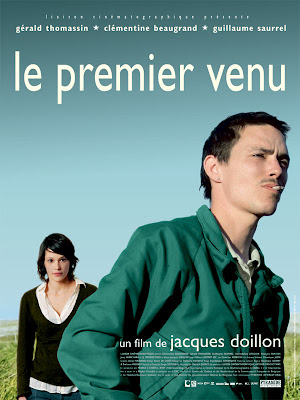 Two figures plunge the viewer in medias res at the start of Jacques Doillon’s quirky, genre-bending, romantic comedy, Just Anybody. Barging out of a restaurant, Costa (a native of these country parts) and Camille (a Parisienne who tags along with him) are disputing a point of difference. They are threshing out a night gone wrong, their first together: Costa sees it as consensual sex; Camille sees it as rape. Yet Camille strangely sees a saving grace in him. For the moment, Costa wants to rusticate and visit his young daughter, and so just as soon, they part ways.

Following Costa to his hometown of Le Crotoy, Camille encounters Cyril, a cop who takes an instant romantic liking to her. They, too, get into a suddenly elaborate conversation. With practiced deduction, Cyril reads between the lines and concludes that Costa, a ‘nobody’ in these parts (a euphemism for sure), raped Camille. It’s a potential ménage-a-trois that is further complicated by Gwendoline, Costa’s long-suffering wife. Along the way, there is an equally quirky array of characters that add comic and cuckoo color to this film.

But Just Anybody is not so much about quick couplings as it is about men and women blundering their way into a proper niche, a sense of redemption. Wrong-headed and deviant, they lead ill-advised lives that seem to be headed nowhere. Seemingly patterned after Jim Jarmusch’s menagerie of misfits, Doillon’s characters are embroiled in a farce that features strange, uproarious, even recidivistic behaviour: a thug who is actuated by chivalry, a cop who stalks a woman and yet refuses to leverage his badge, an urban girl who aids and abets the thug.

Writer and director Doillon depicts a sense of anomie in such a surprisingly infectious and lighthearted manner. Costa commits one felony after another, mugging and robbing his defenseless victims, but his acts seem to be rationalized by some perverse notion of chivalry and responsibility. Camille, who exhibits a measure of urban sophistication, is not above overlooking and condoning Costa’s often shocking crimes. It is she who goads Costa to raise some money, however tainted, as a peace offering to his estranged wife and child for the many years of neglect. Meanwhile, Cyril thinks it’s not undeserved and perhaps normal -- the offshoot of the pursuit of love? -- to be blindsided by violence. The characters are whacked, touched by a crooked sense of moral ambiguity.

The dialogue, scripted by Doillon, is often casual, witty and punchy. But this director seems to be suffering from a paucity of ideas since his prize-winning Ponette (1996) on his way to wrapping up his latest film. Suffice it to say that after all the display of criminal deviancy and feckless behaviour, Just Anybody peters out into a conciliatory end, all too neatly. And perhaps that is the film's overriding but elusive point : however flawed the characters may be, there shines a common humanity -- forgiveness and magnanimity on one hand, contrition and reconciliation on the other. Still one can't shake the cut-and-dried, schematic ending. Doillon must be getting overtures from Hollywood and this must be his calling card.

Title in English: Just Anybody