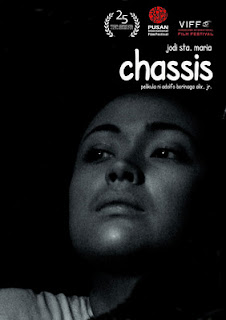 A truck. A homicidal, ten-ton truck. To see Adolf Alix’s Chassis is to step figuratively into the path of such an oncoming, runaway vehicle. For good measure, the same truck will back up on your convulsing body just to make sure it does the job. Alix’s latest film is just that, unforgiving. Unforgiving; it spares nobody. Not the film’s diegetic characters who must endure the grinding forces of poverty and harsh circumstance. Not the viewing audience, no matter how prepared it believes it is for a film like Chassis.

But don’t get me wrong. The same uncompromising virtues are what makes Chassis an ultimately commendable film. And I’m beginning to like it for the same reasons that may ultimately discourage a wider patronage. As with any genuine art, after all, common sensibilities are meant to be shocked and scandalized. It’s often ahead of its time. This is not to say, though, that Chassis is a work of such ground-breaking originality. One will recoil from this realization: that it’s a pauperized version of Chantal Akerman’s Jeanne Dielman.

I say “pauperized” for several reasons. One, Chassis is a literal pauperization, the story is transplanted to an impoverished scenario. Unlike the domesticated Jeanne Dielman, the heroine of Chassis is a woman without a home. Nora inhabits no living space of her own, but a parking lot in a harbor compound, where the underside of her chosen cargo truck serves as her roof. Like a hermit cab without a shell, she must look constantly for a home to live under. She must lug her few belongings – a cardboard mat, a few clothes, a few cooking utensils – from one chassis to another, at the mercy of the trucks’ brisk schedules. Two, what Akerman takes a monumental 201 minutes to dramatize and make a statement, Alix accomplishes in a dense and intense 73 minutes, a veritable slice of life.

Chassis, like Akerman’s film, however, is about self-sacrifice, an entrapment in helpless circumstance, and what happens when one’s reason for it ceases to exist. In Chassis, Nora is a woman trapped in a cycle of poverty and prostitution. She resigns herself to selling herself very cheaply in order to support a hand-to-mouth existence for herself, her lover and her young, uncomprehending daughter.

Her daughter represents the last consolation, a final lifeline, for whom she can sustain her state of indignity. She will put her through school on any pain. She will promise her what she can only grant through acts that degrade her in the eyes of everybody. Her smile is reserved just for her child. Never for anyone else, not for her lover, not for the truck drivers who use her like so much latrine, not her demi-monde kind in this compound, not for the Mormon missionary who tries to evangelize her.

Everything about Chassis is grim and dreary. Depicted in ominous tones of black-and-white, it seems forever set in a twilight hour. One never knows whether it’s lightening or darkening. All one senses is its sepulchral nature. The gargantuan specters of cargo ships and maritime industry, meanwhile, tower in the distance, as though never to stop for the negligible fates of humanity. But what stays with us, more crucially, is the film’s chiaroscuro portrait of a woman with nowhere to go: Nora, with her funereal mask of a face, her sleep-walking steps, her lifeless stance – the shorthand of wretched resignation.

While the last drastic gesture of Jeanne Dielman is born out of a long, cumulative process of prostitution and thankless domesticity, we can pinpoint the last straw that produces Nora’s act of rebellion. With Nora’s raison d’etre intact, however, it is foreseeable that she could go on and on indefinitely as a martyrized woman. Whether, like Jeanne Dielman, Chassis will become a feminist favorite, however, remains to be seen. Viewers have been reportedly put off by its unrelieved bleakness and hopelessness, remarking how utterly different Alix has turned out to be since the days of Donsol and Kadin. But that’s beside the point. To repress the reality depicted in Chassis just to humor our squeamish bourgeois sensibilities is just wrong; more mistaken when we do nothing from the comfort of our armchairs.