REFRAINS HAPPEN LIKE REVOLUTIONS IN A SONG (John Torres, 2010) 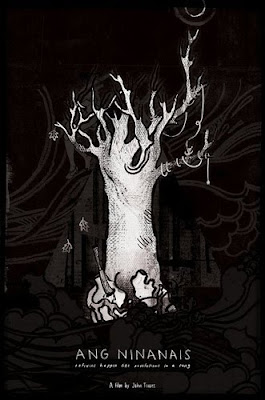 The films of John Torres are forever striving and aspiring for intimacy, it seems. They are not unlike an ongoing series of cinematic billets-doux meant for a secret addressee, defying the impersonality of communal viewing spaces. All of Torres’s films, so far, prompt such an impression, confirmed by the position of privilege given to his speaking voice. In an era of stylized aesthetics, depersonalized poetics and large-scale logistics in filmmaking, the gesture of this speaking voice is a rare virtue that should not be altered, tempered or faulted. It is a meditative and reflective presence that contributes to a cinema of confession, of a persona laid bare, of sincerity. To quote the late Alexis Tioseco: (Torres’s voice)… is deliberate in its cadence but always sincere—and that sincerity is the key. It unlocks the secret to the beauty of John as a filmmaker, but also John as a person. It's a sincerity so tangible, so real, that it's disarming.

Hardly surprising then that Torres has chosen to valorize a voice, a shibboleth of sorts, that fabled and mellifluously singsong timbre of the Ilongo language, in his latest film. At the outset, the director makes it clear, however, that everything is grist for the creative mill, that even speech and language are sheer premise in the filmmaker’s modus operandi of playing with cinematic forms. Refrains Happen like Revolutions in a Song is not simply meant to uphold the orality and epistolarity of his chosen tongue (s) but to put a premium on the many cultures that underpin it. It is the director’s most ambitious work so far, as it also attempts to transcend the confessional material of his previous films (though he has been quoted that certain aspects of this latest film struck a very personal chord with him) and explores, instinctively, matters as hefty as the study of native signs, and the vitality and utility of culture in the face of acculturation and other threats.

His point of departure is the mythical island of Panay. Torres essays the role of a poetic sort of benshi who makes an epistolary dedication at the start to a complicit other – perhaps a twin, a lover or an alter ego? – with whom he inhabits the liminal, interstitial spaces within myth, history, folklore and the pertinent arenas of the abstract. Intertitles soon inform us about the oral tradition of the Sulanon tribe of the island: how certain female children are made to learn the Hinilawod epic by rote and by heart, essentially a love story between two elementals who meet only in dreams. This commitment to memory takes many years to master and the child is kept away from society, and is hence called a binakod. Her consecration to her calling somehow idealizes her in the eyes of common folk and is hence mythicized as much as the elementals.

In present-day Panay, the focus is on a beauteous lass named Sarah, who uses her charms to perform the ruthless job of a debt collector. But her job entails much waiting and frustration, so that she and her assistant while away the tedious time by telling stories – with Sarah assuming the role of a binakod, and later on, a tamawo, the elemental in search of her love. This role-playing, these make-believe moments are not too-far-fetched owing to the nature of insularity. Panay islanders remain steeped in and attuned to a mythic/folkloric collective imaginary that permeates everyday idiom and vocabulary.

History then weaves another thread into the film's story. We read about anecdotes of two factions of revolutionaries fighting for leadership of Panay Island at the start of the 20th century, while American colonizers try to crush or pacify them. These accounts feed the imagination of Sarah, a welcome distraction as she goes from one job to the next. The intertitles soon inform us that Sarah becomes intertwined with history and saves the lives of revolutionaries. Toward's film's end, she disentangles herself from work, and heads to the cane fields of La Carlota, looking for the man she has never met except only in her dreams. Much like the myth she enacts in make-believe.

Much of the film translates as a conundrum, starting with its title in Filipino. Ang Ninanais may be translated as “the desire” or “the intended,” an adjectival noun whose very intention is left a question mark. In semiotic terms, this film can also be entitled "the signified," whose cognitive or concrete identity, again, proves elusive. This titular referent could be a variety of things: an elusive other as much as an elusive gesture or an elusive abstract. As in much of the film, one is continually kept guessing – the temporal collapse connects the past and the present, the world of abstraction and the world of the concrete are commingled as the ontological and epistemological boundaries are erased – to the dangerous edge of losing the point and the plot completely.

Skeptical minds could be tempted to dismiss this filmmaker’s methodology as verging perilously on free association. To wit: he takes two disparate narrative or ideational elements, and weaves an arbitrary connection between them, and repeats the process all over again. Valid, perhaps. What is undeniable is the difficulty of pulling off this improvisatory propensity with conviction, and somehow there is enough sleight of mind and heart from Torres to eke out a worthy film.

If Todo Todo Teros and Years When I Was a Child Outside focus on overtly personal hurts and human failings, Refrains Happen Like can be said to be more inclusive, more multifocal: It explores dualistic conflations (past and present, myth and reality, history and contemporary) and parallels of ontological and epistemic phenomena (the tracing of contours of the collective ethnic imaginary/unconscious and how it threatens to obsess Sarah's own life), which give a glimpse into the difficult but rich, inner lives of multicultural and multilingual Filipinos. There is a wealth of phenomena at work here, the collapse of the past and the present, the mirroring of the historic and the contemporary, the mythical and the folkloric, the make-believe and the real – all illustrating the complexity of establishing human identity – and perhaps illustrating the difficulty, if not the improbability, of human connection and intimacy.

Refrains Happen Like Revolutions is a film of ever-changing, protean forms and guises. One is never too sure where he or she stands as realities interpenetrate. Torres just manages to weave together an ontological and epistemic quilt that reveals the complexity of Filipino identity and psyche, while remaining true to his experimental nature. The balancing and juggling act of this film is a difficult task -- a fact that, in turn, may confound viewers -- but even as a transitional film for the filmmaker, it is a much more layered and much richer work than any analogous film ever attempted -- even, say, that well-regarded Thai film, Mysterious Object at Noon, by Apitchatpong Weerasethakul.

Email ThisBlogThis!Share to TwitterShare to FacebookShare to Pinterest
Labels: Cinemalaya 2010, John Torres, The Persistence of Vision