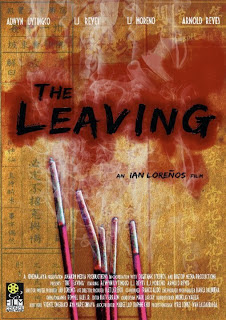 Everything is changing, leaving, and returning. There is always a constant transience in this world.   -- The Leaving, program synopsis

Strange, but one comes away from The Leaving with a very little sense of its vaunted transience. The film promises movement and what we get is stasis. If nothing else, everyone here is trapped in purgatorial states, a state of imprisonment, which makes transience synonymous with escape. Escape, that’s all – and perhaps a dastardly one. Let’s recite a precis of their life stories one by one. Martin, unable to fend for himself, literally hightails it to the loving arms of his parents in the States. Grace sees transience by giving up on her marriage. The line of least resistance. And those who supposedly make the existential  transition – the transient ones? The lovers, William and Joan – they do so through violence. Violence also takes another neighbor; they find her all broken like the rag doll that is supposed to stand for her missing younger sister. Sick. And how about the ghosts trapped in this haunted apartment building? This film defines transience in the most perverse terms: A function of flight and defeatism. The frightening part is, it seems done in solemn earnest. As such, one tries to see another film altogether. Another review instead, written before knowledge of those lines about transience – unearned, never made concrete.

Popular notions, whether ill-informed or not, are such that the Chinese in this country are so clannish and tight-knit in their ethnicity that it's hard to single out anyone of them who is struggling in life. Mention the word Chinese and this immediately conjures up lofty and grandiose images of a business tycoon, or a rich, well-connected fat cat, or a kid studying in the most exclusive schools. In Ian Loreños’ The Leaving, one gets to see the other side of the tracks: Tsinoys who are economically vulnerable and subject to moral and human susceptibilities.

But Loreños -- who wears a number of hats as writer, producer and director for this film -- locates his characters almost exclusively within a middle-class spectrum, which short-circuits some of the exercise. Still, in a film set in a haunted apartment building in the enclave of Binondo, it’s a good college try. Perhaps, there aren’t really impoverished Tsinoys around after all.

Three intertwining stories make up The Leaving: subtitled Martin, The Lovers, and The Wife. In Martin, the eponymous character is the scion of a once-wealthy family who have since emigrated to the United States, leaving him alone to fend for himself. In the ensuing fall from grace, his girlfriend has left him, while he goes applying in futility from one job to another. In The Lovers, Wiliam, a married man, is embroiled in a volatile affair with travel-agent Joan and they tussle with deadly results. In The Wife, one sees a long-suffering character who discovers her husband’s indiscretions and starts a close, almost intimate relationship with the next-door neighbor, Martin. These overlapping lives must also coexist with the ghosts and ghostly ones trapped in the apartment building.

A nagging feeling of familiarity, however, sours an appreciation of this film. What condemns it is an unbridled wearing of influences on its sleeves. The Leaving is a pastiche of all-too-identifiable sources -- from Asian movies, mostly Hong Kong derivations, particularly Wong Kar-Wai, and still more specifically In the Mood for Love. Read above for the plot toThe Wife. From the very Asiatic color motif – red, all shades of red, curtains, calendars, fruits, dresses, and blood, copious blood – to suspiciously familiar shot compositions to the presence of ghosts recruited from Asian horror flicks, Nakata’s The Ring among others, this film is like a shameless collage that would put Picasso and Braque to shame.


It would have been all compensated for had this film recounted fresher, more novel stories, but that, too, is not forthcoming. Aside from slavishly quoting In the Mood for Love in one part, the other two stories are not compelling enough to sit through either. They are trite tropes that one might generate in a scriptwriting workshop – e.g. someone looking for a job to no avail; a pair of lovers fighting and leading to the most logical extreme. If Loreños feels so compelled to tell stories about Tsinoys, he is better off adapting stories by authors like Charlson Ong, Mario Miclat and other Tsinoy fictionists. Admittedly, Loreños had a good premise – the notion of the struggling Filipino-Chinese – but somewhere along the way, he just lost the plot, and ended up paying homage, not to Tsinoys, but old and rehashed representations of Asian filmmaking.

Email ThisBlogThis!Share to TwitterShare to FacebookShare to Pinterest
Labels: Ian Loreños, The Persistence of Vision