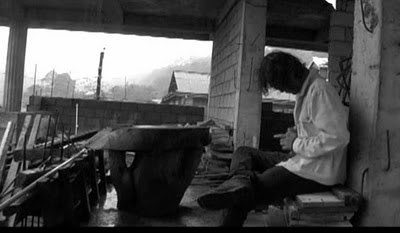 There is, up to a certain point, the exclusion whereby we short-circuit those who are sick and reintegrate them in a sort of marginal circuit, the medical circuit.

Melancholia, the latest masterwork from revered Filipino filmmaker Lav Diaz, smolders with the embers of black emotions and delivers on the promise of its portentous title. A film about bereavement and loss, Melancholia documents the tragic plight of desaparecidos, those forced to disappear, and those dispossessed by their disappearance. While there is a dark lingering on personal and private sorrows, the sorrows emanate and resonate equally from social and ideological solicitudes.

Running at a meditative and heavy 450 minutes, Melancholia proceeds ponderously and woundedly in this saga of the bereaved and the disappeared, recalling such films on the same theme and subject as Luis Puenzo's The Official Story. In Melancholia, however, there is the likeness of a double madness -- one born out of the sorrows of its characters and the other born out of their artificial efforts to overcome these sorrows. Meanwhile, the imagining of the dead is close to idealization, sheer heroes in the fictive mind (romantic even to the very end). So there lies the emotional crux of the living in this film: how to move on, how to forget, against the cruel tenor of memory.

Memory here is conscience itself, a burden but a necessary evil. It is not just an unshakable scourge that will not let up, but a kind of register, a document of history that will never let injustice go uncommented and unvindicated, certainly not those inflicted by the muscular fascism of a government. Here, the coercions of artificial solutions such as psychology – a kind of ideological state apparatus, Orwellian and Althusserian, that returns those who deviate and dissent to the control of society – is no match for the inexorable onslaught of painful remembrance. There is no forgetting. Time, with all its clichés, is no healer.

When we meet them at the outset, the bereaved are not unlike fugitive characters from a Pirandellian play, converging on the amphitheater of Sagada: Alberta, Rina and Julian, all bereaved by the loss of their revolutionary spouses. They have sought refuge in psychological treatments, as well as support groups meant for their kind, but they remain tormented by grief and and anguish. Immersed in one character after another, Alberta as a prostitute, Rina a nun, and Julian a pimp – all assume characters in the hope of reorienting and reconnecting with life. By any appearance, their experiments are ill-advised: Rina is inconsolable with despair and uncertainty; Alberta breaks down in tears while in bed with a customer; and Julian has scrambled his moral compass, assuming the persona of a procurer, a character straight out of his fantasies.

Characters in Melancholia – like the learned and literate artists in Death in the Land of Encantos – have a literary cast to them. There is little chance of encountering them in everyday life. But for once, it is reassuring to see a filmmaker redefining what is possible in film, and the splendid thing is, his characters are convincing in their sharp individuations, whether they be artists, writers, widows, or rebels. Through long, unflinching takes in unrelieved monochrome, these characters take shape and come full circle, full of fierce wit and learning, raw feeling and emotion, dark bile and vitriol, making their own tormented humanity much more tragic and lacerating to witness.

Thus we find Melancholia’s characters reassuming their real lives in the capital. Far from the prostitute of Sagada, Alberta is the youthful principal of an elementary school while Julian is an established writer and the proprietor of a publishing house. Rina, by now, is prematurely dead, presumably of suicide. Between Julian and Alberta, who must also reassume a difficult role as a mother to Hannah, a young girl also orphaned by the disappeared and severely traumatized, the dynamic of hope and capitulation will play out. As Melancholia traces the threads of its dark denouement, we sense that many of its expositions are no less important and relevant.

Here, as in its companion piece, the equally vitriolic and similarly themed Death in the Land of Encantos, Lav Diaz uses various mouthpieces to lay bare his various indignations and convictions, personal and social, ideological and political. Diaz has no want of strong opinions prompted by the abuses of the establishment and the entrenched. In Death in the Land of Encantos, there are stinging rebukes against the fascistic military, thieving government officials, and even artists blatantly lobbying for the National Artist Award. This time, aside from skewering the big targets, Diaz levels his criticism against the corruptions in the educational system and those in the realm of commercial cinema.

But, while crying injustices remain, and while towards the end of Melancholia, repressive state apparatuses are overwhelming and ruthless, Diaz tries to leave us with subtle reassurances. We see a quiet and lyrical imagining of how Renato, Alberta’s husband, must have coped with the prospect of death. Trapped on all sides in a remote forest by advancing military troops, he lays down his gun by his side as rain falls like a reprieve. Exchanging it with pen and paper, he writes a letter never to be sent, a haunting letter about his greatest sorrows. About the fate of his country, its numberless pains, never seeing Alberta again… Thereafter, a bittersweet moment as we see his remains, and those of his comrades, borne in a procession by villagers on his way to a modest burial. There is no better way to die. Let his sorrows be our own too.