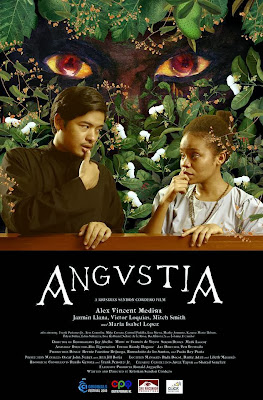 Doubtless, the film throws into perfect relief the microstructures, as it were, of 19th century Bicol. Doubtless, the film displays due diligence, none more apparent than in its impressive grasp of foreign and indigenous languages – Latin, Agta, Bicolano, Spanish, and so on. Doubtless, the mise en scene sports all the texture and fabric befitting its time, its church architecture and costume done to a tee. Doubtless, if it needs to be spelled out, all the technical and production polish on this film proves beyond reproach.

However, there’s the rub. As a consequence of its obsession to get the particulars of the period right -- e.g. the old, indigenous songs, the old Latin, liturgical rituals, the old architectural filigree and the traditional portraiture of flora -- Angustia's gloss seeps and sticks to the surface, even as it neglects the psychological spiral of Don Victorino Hernandez, a creole secular priest, and his irrevocable descent from religious zeal and fervor to self-destructive madness. Instead, it manufactures a most unreliable man of cloth: when it is convenient, zealous and brave in his catechism and evangelism, yet at others, when again convenient, too weak and brittle at the crucible. He is someone who couldn’t hold a candle to, say, Bunuel’s Nazarin or Bresson’s country priest, who must be turning and tossing in their graves.

What the film is intent to accomplish is clear enough: the humanization of clergymen, the exposure of their carnal flaws, their baser instincts. But this is too simplistic, too outmoded, if not too antiquated by now. This might be explained by its origin in an old and dusty Bicolano legend. Rizal, meanwhile, made novels out of priestly warts more than a hundred years ago. Leo X is no oddity, but a tip of the iceberg. Latter-day scandals of pedophilia involving men of cloth only serve to reinforce that.

Don Victorino’s downward spiral from enthused evangelism to sin and anguish to what he deems as the release of suicide can only be a cop-out of characterization. In the tenacious theology of the Church, taking one’s life is taking the mortification of flesh a little too literally. It represents a damnable, unforgivable act for a priest to commit self-murder, even as an act of repentance. Such an act is tantamount to self-excommunication: to be buried without sacrament, away from the blessed dead. That is a deterrent from a path of self-destruction that is seldom overlooked. Pain at the threshold of death, but not naked death, is more their style.

Yes, in the overall scheme of things, the priest’s impending death by his own hands serves the film’s grander theme, and that is the capitulation of the secular priest to pagan catholicity. Genuine angustia, however, consists in carrying one’s cross and reliving the passion of Christ. Suicide is the easy way out. But shouldn’t we relish that this film attempted the reversal of Catholicism, in favor of indigenous religion, or at least a union between those two schools of spirituality? Shouldn't we be thankful for the spectacle of one of them all but defrocked from a hieratic place on the pedestal?

If it were set in more contemporary and Freudian times, Angustia may have kept itself honest at mirroring verisimilitude and describing actual psychological states. But even without it, one can cite Bunuel as an exemplar at dissecting and exhibiting these sacerdotal figures with accuracy through sophisticated surrealism, realizing the resilience, persistence and expedience of these men beneath cowls: these priests are no pushovers, never self-defeatist, so that even this arch-critic of the Church was often between two minds about them, later on becoming “fond” of these clerics as benign pets, or as worthy adversaries, as film critic Pauline Kael once put it.

Detail after detail paints a promising beginning for Angustia, but the protagonist's credible transformation is not forthcoming. Don Victorino Hernandez is presented as someone with vast reserves of evangelical will and zeal. He is as fond of botany and pious to the Virgin Mary as St. Francis was of animals. Also, he is undertaking a grandiose mission to convert the Agtas of the mountains of Bicol. Once, at the edge of the forest, he finds one playing cat and mouse with another Agta. He promptly converts Dunag to Catholicism and falls in love with her. They soon partake of carnal knowledge everywhere, even in the confessional. He then converts Dunag’s pursuer as well. Big mistake. The two Agtas court under his nose and decide to marry. Priest goes suddenly psycho and kills them with his own hands. Then he starts to see their ghosts.

What begins as liturgical drama (i.e. Don Victorino Hernandez, ensconced deep in his forest paradise, a paradise expressed in his love for wild flora, and the bliss of the Eucharist, expressed in the dead language of Latin, is about to lose it all) turns into Jacobean drama, with sensational elements of murder, sex and acts that can't be washed away so easily like laundry, before morphing into something no less incongruous: the implicit apostasy of the priest, that is, his implicit reverse conversion by a Christianized babaylan, who represents the syncretism of indigenous and foreign beliefs. Then the act that one can already prefigure.

Does this make believers, as it were, out of us? Don Victorino Hernandez's fatal trajectory has been done to the point of indifference already, too pat, and yet unearned, in its inevitability, in many a film or work of literature. Real, priestly anguish is sadomasochistic, but not fatal: manifested in the belief of unworthiness, the vow of poverty, the mortification of the flesh, self-flagellation, self-abnegation, the ritual crowning of thorns. Hence an ending true to that tradition seems more plausible: the priest driven from our midst, like Bunuel's Nazarin bearing all his burdens, or Bresson's priest of Ambricourt, despite terminal sickness, dedicating himself to his duties, with graceful anguish in his heart, until the very end.
Posted by Noli Manaig at 8:39 PM