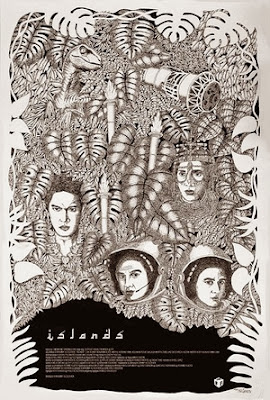 Already many days away, weeks away from having seen it for the first time, Whammy Alcazaren’s Islands keeps surging back to me, wave after wave of images washing over my imaginary, surprisingly intact, surprisingly of a piece, unscathed, even through the sieve of unreliable memory. Faces in anguish, faces in lachrymose release, minimalist, futuristic interiors of a space ship, lush, leafy forests and dark landscapes -- many frames of such nature have become a brand on the brain. Certain images evoke those of Tarkovsky and other thoughtful directors: more than a handful come close to becoming iconic, so well-designed and so well-composed as to linger long and endure. Colossal now seems like a rough draft for this.

This time the audio-visual aspects and overall design have caught up with Alcazaren's vision. This time the themes pop out of the abstract, rounded out, the signifiers give justice to the signifieds. This time, however, he scales down his scope -- though it remains a vast one. If the expansive myth of man is part of the subject of Colossal alongside man's timeless grief, Islands centers on seemingly narrower existential longings -- loneliness -- something Alcazaren traces speculatively to prehistory and extrapolates to the future.

Rigor and restraint remain palpable ideals to admire in the filmmaker, pinpoint in purpose and composition: the concretization of an abstraction, a difficult task, is never refracted nor distorted out of shape. Simply, Islands is of a distinctive look -- is this perhaps the filmmaker's coming to his own? his mature aesthetics? -- although not necessarily stylized nor rendered raw from the camera.

What might be deemed conventional staples and set pieces in an avowed sci-fi film, which Alcazaren declares Islands to be, mostly takes place off-screen. In essence, we get, instead, a sombre but riveting tone poem -- variants on a theme -- that sustains itself and our rapt attentions over the duration. Lest this raises the red flag, that of a monotonous meditation, Islands is a reassuring film that maps out loneliness without neglecting its timeless opposite. Thus the filmmaker exposes himself with nude vulnerabilities, taking great emotional risks to chart, to considerable extent, the progress and struggle of love.

Like an archipelago of fragments, Islands is a cluster of three seemingly separate but interconnected narratives, signifying one meaning: the bane of being solitarily an island, the syndrome of being unbearably alone, to join the allusion to John Donne and the metaphysical poetry of the 17th century. With this theme as a central organizing principle, these three stories are surprisingly not too dated nor too antiquated for comfort. This intersecting tryptich - shot by a diegetic director -- are contained within a primary narrative, contrapuntal in look and feel. While the embedded diegesis broods with eclipsed existence, the primary narrative bristles with color and vibrancy, steeped in the personal moment yet steeped in contemporary ethos, full of bonhomie and intimacy, yet going in circles with what remains unsaid, forever out of turn.

Aspects of awkward romance, the labor of love. However, we are first thrown a curve ball, the fictional director's treatise on the subject of unrelieved loneliness and the elusiveness of its antithesis. This inflects our anticipation of hard-won love, whatever it is going to be -- agape, philia, eros -- as this three-part-film-within-film lingers over how -- sadly, not why -- man can't stand to be alone and the diachronic deductiveness of love's failure. Perhaps because human nature remains inexplicable in its mysteries, an inexact science, even in its most basic mechanisms, so that this embedded film seems flawed with assumptions as it crisscrosses time and space and is aptly told in non-linear terms.

Story 1 of 3. Somewhere in outer space, in unknown time, two astronauts in a space station are cut off from earthly contact for lengthy periods of time, sustained only by a chamber full of books and phonographic records, cut off even from each other, although they are identical twins. Something -- or someone -- has driven a wedge between them, a seeming displacement of agape by suspected eros meant for someone else. One dines alone; another goes on a solitary stationary bike. In loneliness, tears of regret flow.

Story 2 of 3. Set in the present, a second story is that of a matriarch living alone, who, except for occasional visits from her daughter and her grandson, is almost without outside connection. She is tied to the past, to her veneration of the Virgin Mary, to the memory of a dead husband, refusing the overtures of her daughter, the comfort afforded by technology. She speculates about her neighbors and talks, in almost otherworldly tones, of a sublime silence. She remains haunted by a vision from her past of a bright space craft shooting into space.

Story 3 of 3. To make complete the ubiquity of love and its denial, the film harks back to prehistory, where a man trapped in the vast wilderness, an existential cave man if ever there was one, stalks a landscape yet to be tamed. Primitive of clothing and tools, this man is made complex by tears, made so apparently by the rejection of a woman whose love belongs to another. For his needs, this man can slay big game, even dinosaurs, but he is powerless in the refusal of the love he offers, in his lack of companionship. When he hunts, when he sleeps, when he wakes, alone: Tears stream down his face. Meditating on such dark, brooding, Manichean emotions, this is the prehistoric condition of man, the film assumes, in the continuum of time.

Relying on its filmographic predecessor as a frame of reference, Islands exemplfies the judiciousness of Nam June Paik's well-known lesson, which performatively says, "If something works, then use it again." That is to say, many of the virtues of Colossal are here put to good use: Islands explores, once again, black emotions, their analogue of secluded landscapes, rendered in regional poetry and expansively framed by the pan-ontological convergence of past, future and present timeframes (Colossal also encompasses cosmogony and pan-historical dimensions in its overreaching attempt at grand abstractions) -- only this time fleshed out more thoroughly, more sustained in its scrutiny.

Presumably conceding to his own joie de vivre, his bliss and happiness in contemporary times, Alcazaren invests faith in a pronounced presentism, suggesting, seemingly, the past and the future's fatal, dialectical dead-ends: one with its primitivist loneliness, a world with barrenness and lack of solace, while the future mechanically sublates or sublimates the apparatus of love. Even the matriarch's tale, set in the present, contradicts its loneliness and elegy with a different treatment, neither moody, but perhaps even beatific with religious iconography, alive with revelatory color, alive with available dynamism and possibility that contemporary life offers. The black-and-white tonalities thus give way to a fuller palette of contemporary hope, commending itself to the transformative potential of how love-makes-the the-world-go-round, how love-conquers-all.

Why sci-fi when this film seems to deny the genre's conventions? To call it a sci-fi film is to all but single out for praise its modest props, its miniature space ship model glimpsed behind the scenes of the diegetic film. But seriously, the anything-can-happen potency, the time-tunneling trick of sci-fi, remains, conceivably, the most durable device to serve the film's all-encompassing themes. Foregrounded, at the heart of the film, however, human capacities and susceptibilities take precedence. Perhaps this dark vision of unknown ages may be just that, the fear of the unknown or perhaps something that further hints at Alcazaren's presentism, attuned alone to the zeitgeist of our times and what it offers.

Think about his conception of the other aspects of the future: Islands remains patterned after the anthropomorphic. The future still seems like us: Astronauts eat like we still do – on regular tables, with utensils, chewing food as we do. Listen to pop music as we do; read books as we do; decompress as we do. No whiz-bang and glittering functioning of gadgets or machines of advanced technology alienates us: Some simple human innovations though may have been discarded, so much so that no one is there to administer the Heimlich maneuver. Time travel seems the only functional index of the future, hinted at, ostensibly, for one to return to a loved one in the past.

Seeing this side by side with Zulawski’s On The Silver Globe, also a story about astronauts but with over-the-top narrative excess, is an instructive study in contrasts: Islands is strictly stripped to essentials and well-disciplined, going in the opposite extreme with austerity, sustaining one unvarying note to the point of simplicity. If Zulawski’s shows a hyper-plotted construction of the future, Alcazaren’s slow-burning meditation of austerity must have been conceived with utmost calibration of functionalism, with strict, geometrical and rigorous architectonics.

Yet here again, at the beginning, another strength of Alcazaren is reaffirmed: his fluent poetry given voice via a forlorn woman, lamenting someone’s leave-taking, the commiseration of nature, and the hope of the loved one's return. (That maybe the tenor, or my memory is quoting another film.) This sets up the melancholy prologue of the film, a reminder of what Alcazaren has done in the past, and a point of departure for him. Towards the end of the film, then, Alcazaren, unable to keep a straight face, switches registers and the solemnity bursts into topical song, a pop rock ditty in all its idiomatic popularity, deep in outer space.

Epilogues, even here, stand for modest but promising new beginnings. Set in a bar in the present, a man after hours talks about work on a film (the same above-mentioned film) with a girl he dances attendance to. Slowly they slide into contemporary codes of courtship: not stilted nor formal prose, but one that is loosely conversational, au courant, in lockstep with each other: a kind of leap of faith to reach the other, an act that renounces for now Alcazaren's trademark poetic monologue.

Growing in synergy, the twosome engage in an antiphonal exchange, a crypto-romantic back-and-forth, with sometimes silly, sometimes winsome results. The camera frames the prospective lovers with a seeming reassurance of its pretense of non-attraction, the pretense of faux-romance. Perhaps an intimation of a post-structural romance. (Modernists, someone once said, hate the predictability of popular music, something Islands apparently disagrees with.)

After the predominantly cheerless content of most of his output, Alcazaren has switched from dismal darkness to a kind of diurnal dreaming. Bare frames of pure white, symbolic of pure intention, reminiscent of a Mondrian, or a De Stijl distillation, are the coda to the film while the conversation continues off-screen between man and woman. Even with such abstract frames, this is Alcazaren at his most unguarded moment, an unmistakable prelude to the profession of love.
Posted by Noli Manaig at 7:59 PM

Email ThisBlogThis!Share to TwitterShare to FacebookShare to Pinterest
Labels: Cinema One 2013, Whammy Alcazaren