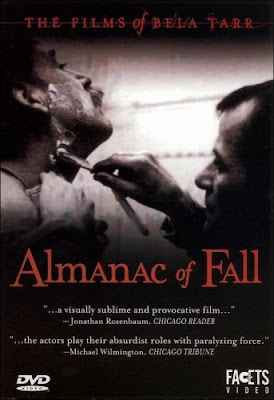 This household barely stands. The walls are creaking, ready to burst from the weight of unsavory secrets. In the throes of demise, it cradles - or, perhaps, corrals together - some of the most grotesque specimens to be found in any menagerie. With a virtuoso command of his directorial powers, Hungarian auteur Bela Tarr constructs a leery portrait of a feral group of characters in dire need of domestication, held together by the accident of blood and mercenary need.

Hedi is the matriarch of this house who rules precariously, an aging widow who must contend with a rebellious son, Janos, who has lost all filial piety and looks at her as a cash cow. Janos, unbeknownst to his mother, is carrying on an affair  with her live-in nurse, Anna. Anna, for her part, is involved with not one, not two, but three men.Miklos, her original lover, after fits of rage and violence seems to take a more cerebral tack. Tibor, an aging school teacher, is the third lover, who is also never far from the lonely matriarch’s orbit. These deeply flawed and fragmented characters are not above losing their scruples: they lie, cheat, steal, inflict violence on one another, form tenuous alliances, and plot each other’s demise.

Almanac of Fall represents a watershed between Tarr’s earlier films which were mostly social realist depictions and the current cycle of films culminating in Werckmeister Harmonies. It is neither of those two styles. After helming The Prefab People three years earlier, a story of another household threatened by bitter strife, Tarr takes the kernel of that story and couches it in pseudo-melodrama. Yes, it contains certain elements of melodrama, but emotionalism and sentimentality are reined in: rage – of sex, of violence – is what is most visible here, witnessed in medias res, so that the audience is caught off-guard, more surprised than steeped in emotions. Tarr further turns this genre on its head with an absurdist twist: the characters, as though growing philosophical or suddenly wise or perhaps momentarily touched, suddenly burst into song in the middle of a scene, as though singing lullabyes, the lyrics containing the metaphors of  the moment.

Tarr also brings the mannerisms of other well-known melodramatists to this film’s mise en scene. The unnaturalistic lighting is redolent of Douglas Sirk (as in All That Heaven Allows) and Fassbinder's BRD Trilogy. The stylization does not end there, but we witness it, too, in how the figures are shot: flat, two-dimensional, from oblique angles, often in claustrophobic close-ups, often framed in close proximity.

When the dust settles, Tarr executes a last plot pirouette: something has happened offscreen, an ellipsis that overturns much of what came before. Rapprochements are in the offing, a scapegoat emerges, and the house restores itself from entropy. Or so it seems. As though to provide a counterpoint to the outbursts of harangues and histrionics that came before, it all ends with a dance. Life should be about grace and tenderness, Tarr seems to say, smiling like a Cheshire cat. Yet we suspect we see through it all -- the lull before the storm, this most untenable impasse.