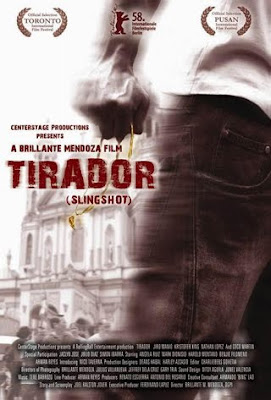 Brillante Mendoza’s Tirador opens summarily and briskly with a police raid on a shantytown in the outskirts of Quiapo. Rendered in cinéma-vérité fashion, it's a night sequence that simulates what we see on the evening news, the herky-jerky camera work that documents all manner of interrupted illegality – and in this breeding ground of criminals, out they come tumbling.

The element of surprise rattles the red-handed: packets of drugs and other paraphernalia go flying out the windows, prostitution stops short of consummation, and the guilty, who must feel accordingly so, take a dive into fetid waters to escape. No exit for the unwitting – except for those who have learned to adapt to these specialized lives, those who know the loopholes of the law and can humor them.

It’s a heady and humorous beginning to what is essentially a cross-section of the underbelly of Quiapo, a portrait of the small-time criminals whose fates literally crisscross in the commerce and commotion of its busy streets. Much of the humor and irony can be self-deprecating, taking to heart, it seems, the truism that the Filpino laughs at his own misfortunes. And there can be as much misfortune as fortune in the act of everyday survival. Mendoza’s criminals are not smooth and infallible operators, but they know how to roll with the punches.

Young Odie is one of them, and his modus operandi is to pilfer coins from unattended gambling machines. Another is Caloy who must turn to snatching after his pedicab is heartlessly repossessed. Odie’s father will take your valuables at knifepoint, but shares his meager takings with adopted families. Rex and Tes are a couple in more ways than one, pilfering cheap electronics in well-coordinated tandem.

In Tirador, most of these men and women, young and old, have long ago stopped sentimentalizing the despondency of being at the bottom of the social totem pole. Even among their own kind, there is no letting their guard down. They live by the cold laws of the urban jungle, where Social Darwinism applies with ruthlessness as well as with finesse. One can never afford to turn his back on a cowering figure or a seemingly repentant or remorseful quarry. They are a pack of chameleons with well-practiced masks, all honed to second nature.

Mendoza’s social commentary – leavened by streetwise idiom and the jargon of gangsters and thieves – levels the breakdown of law and order on the whole rotten hierarchy of society. The usual suspects are easy targets and not spared here: they whose electoral faces are plastered all over walls like so many mugshots of wanted criminals. But the culture of cynicism and immorality are more deeply entrenched. Politicians and religion are partly singled out, but in truth, it’s an over-determined state of things. Corruption breeds corruption, ad infinitum.

To disentangle the coils of corruption, however, is not, ultimately, Tirador's purpose. What’s paramount is its study of self-preservation. Nothing is sacred here-- so that the feast of the Black Nazarene is not just a moment for religious fervour – but provides singular opportunities for thievery. Grand electoral rallies, with the fiery motherhood speeches of the country’s supreme leaders, are equally promising bonanzas for thieves.

Tirador, as the foregoing suggests, is sheer gritty realism – but not angry, certainly not vociferously so. Paradoxically it radiates raw and lurid power with underplayed drama. As a piece of docudrama, it has much method and stripped-down production values in common with Mendoza’s other real-time film, Manoro. It’s a visual departure from the self-conscious aestheticism of his other films namely Masahista and Serbis. But in Tirador, there is a hand-in-glove dovetailing of form and content. The handheld, in-the-trenches camera work goes hand in hand with street-level proceedings, observing without comment what would otherwise be sentimentalized or overdramatized. Where exploitation might be unavoidable, Tirador achieves sheer human compassion.

Email ThisBlogThis!Share to TwitterShare to FacebookShare to Pinterest
Labels: Brillante Mendoza, The Persistence of Vision