From Antonioni to Brocka, The Allusive Cinema of Tsai Ming-liang 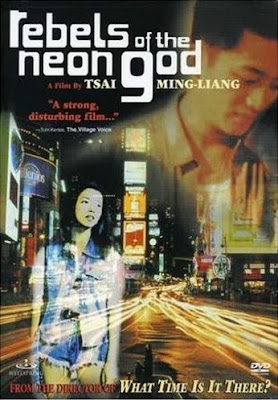 From Antonioni to Brocka, The Allusive Cinema of Tsai Ming-liang

Born and raised in Kuching, Malaysia, Tsai Ming-liang was introduced to movies by his grandparents, who often took him to screenings of popular films from China, Taiwan, India, Hong Kong, America, and the Philippines at any of the dozen or so cinemas that populated their small, quiet town.
-- Darren Hughes, Senses of Cinema

Don’t think for a moment that Tsai Ming-Liang, that formidable auteur of Taiwanese New Wave, sprang fully-formed from the godhead of cinema with his feature debut, Rebels of the Neon God, in 1992. Far from it. As the epigraph suggests, Tsai has had an early exposure to the influence of film, a childhood pervaded by film and moviegoing, and it doesn’t end there. Long before the clinical term for his condition had a name, Tsai’s diasporic life saw him cultivating a cinephilia, a voracious consumption of films. It’s a cinephilia that seems unabated and has found expression throughout many of the director’s films. Think Tarantino, think French New Wave, only more integrated. Less apparently intertextual.

For Tsai, the real watershed that ushered him into a more serious and obsessive pursuit of the moving image was his relocation to Taiwan at the age of twenty. Unlike his native Kuching which could only offer commercial cinematic fare, the cultural institutions of Taiwan had vaster resources and deeper, more extensive archives. Enrolling himself in the Chinese Culture University in Taipei to study drama and film, Tsai was soon exposed to the films of the French New Wave and the New German Cinema. This formative period would see his initiation into the works of Truffaut, Fassbinder, Bresson, and Antonioni. These are the auteurs to this day that are most often identified with Tsai.

True to form, Rebels of the Neon God is a laudable first film that doesn’t forget to pay tribute to the director’s considerable filmgoing. Thematically speaking, Rebels mirrors the urban alienation that preoccupies Antonioni in such films as La Notte and L’Eclisse. Obsessed with the more “modern” milieus of cities, Tsai would go on to problematize urban relationships in such films as Vive L’Amour and The Hole.

Rebels of the Neon God, in sum, chronicles the disechanted lives of several youths, lost in the unforgiving shuffle of city life. As the film begins, Hsiao-Kang evinces the symptoms of this anomic affliction. One restive night, he inexplicably crashes his hand through a window pane, an allusion to a similar scene in Wenders’ tale of alienation, False Move.

Meanwhile in the garish lights of this stormy evening, Ah-Tse and Ah-Ping, two youthful operators, ransack payphones for their hoard of coins. Later on, Ah-Kuei, another restless denizen of the city, winds up in someone’s bed yet again, her palliative to combat her loneliness. Then, a day later, Hsiao-Kang, with his hand bandaged, tries to get a refund for tutorial classes he is taking at a nearby school. End of education. They are dropping out from life, and neither does Tsai offer a neat solution, let alone an optimistic end. Rebels, as far as cinematic depiction goes, are meant to toe the line or be crushed. For good measure, Tsai never misses the chance to juxtapose Hsiao Kang with a pasteboard image of James Dean circa Rebel without A Cause.

A more fascinating aspect of Tsai's film, however, is its seeming wealth of references and allusions to Filipino films. Rebels of the Neon God may very well be Tsai’s sneaking tribute to Lino Brocka’s Manila in the Claws of Neon, probably the nearest film to depict the crushing and grinding stranglehold of a city. Lee Kang-Sheng’s Hsiao Kang, the central outsider-loner of Tsai’s film, bears an uncanny resemblance and countenance to Bembol Roco’s shell-shocked provincial Julio Madiaga in Brocka’s masterpiece. As Julio Madiaga is cornered by a murderous mob towards the film’s end, Ah-Tse and Ah-Ping, who have just been caught stealing motherboards from video game machines, suffer a very similar fate in the denouement of Tsai's film. The similarities are, well, uncanny.

If the foregoing should be dismissed as a function of speculation, mere conjecture, the charge may be justified. But consider the eerie sense of recognition as one goes down Tsai’s filmography. Take Hsiao-Kang’s transformation into a porn actor in Tsai's Wayward Cloud, a narrative twist prefigured by Julio Madiaga’s turn as a male prostitute. In another Tsai film, The Hole, there is the pivotal conceit of a hole in the floor of an apartment building that becomes a lifeline between a man and a woman. Familiar? Can you say Gallaga’s Scorpio Nights? A more particular and thorough study may yield more connections and perhaps these shouldn’t be surprising. Tsai’s easter eggs embedded in his films are a fitting tribute to a cinema that is worthy of tribute and emulation. Our cinema.

Email ThisBlogThis!Share to TwitterShare to FacebookShare to Pinterest
Labels: The Persistence of Vision, Tsai Ming-liang