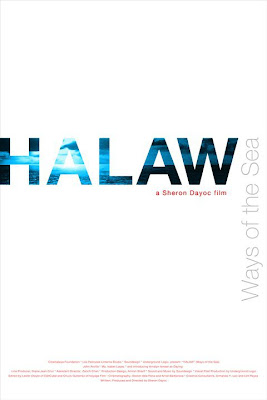 Here in imperial Manila, how often do we stop and think about distant Mindanao? This begs repeating, for in truth we have consigned our southern brethren to the margins of consciousness. Worse, we think of them with a colonizer’s orientalism: warlike and belligerent, intractable and ungovernable. No understanding and touching base with their kind, let alone extending what is due them as part of the nation. Our nexus with them is tenuous, characterized by neglect and ignorance, hostility and strife. While the North gets the lion’s share of infrastructural development, budgetary allocations and administrative favor, the South is a poor relation that must fend for itself, even if it means scattering its desperate denizens in search of greener pastures.

Sheron Dayoc’s feature debut, Halaw, is a story of the dangerous, daily diaspora from Mindanao to immediate foreign territories, a story of risky human traffic we have for far too long turned a blind eye to. From a native Mindanaoan director, it is a welcome corrective to the lack of films about the region in general. Hopefully, it isn’t the last. It isn’t pretty to look at as it should be, no glossy and hypnotically arresting visuals but a cinematographic treatment marked by raw, cinema-verite imagery centering on those who would rather escape notice, let alone documentation. Halaw is a film that follows the human smuggling through the so-called southern backdoor. Rendered in real-time narration, it details, with a strict observational stance, one fraught passage through the perilous seas of Mindanao.

In a seaside town in Zamboanga, where it all begins, a Badjao named Jahid and his young daughter Daying prepare for the illegal pump-boat crossing to Sabah, where they intend to locate his missing wife. They lack the requisite fare but prevail upon the boat’s conductor with Daying’s last remaining possession, her earrings. Another practiced traveler is Hernand, a white slavery operator who is finding it hard to recruit his share of unsuspecting women (i.e. virgins are at a premium). In Hernand’s company is one such girl, too wide-eyed and ignorant to calculate her impending mistake, drawn ironically to her future incarnation, a middle-aged prostitute in the same boat, who plies her flesh in Malaysian territories. This prostitute gladly humors her with a modern woman’s accessories: her beguiling perfume, her fancy clothes and her lucrative claims if the younger girl played her cards right.

However, the sea journey is never free of risk and treachery.
The pump-boat operators may know all the precautionary measures from mapping out the best routes to escaping detection in Malaysian waters, but nothing is guaranteed. The smallest exigency – e.g. the presence of water in the hull, the sudden sputtering of the boat’s motor – can be a cause of concern for both the travelers and their transporters. Easy passage is for the unusually lucky.

Even as there are divertissements along the way – e.g. the young Daying regaling her boatmates with what must be a Badjao dance, something she parlays into a handful of coins – the sense of reprieve is palpably temporary. In a well-conceived, penultimate scene set on Mananako Island, the last stopover, the sense of peril becomes apparent. Flesh becomes the currency to settle old debts, and the sea is no longer what it seems. The hardest part, however, is far from over.

If, as one watches, one detects an Ariadne’s thread of sorts through Halaw and films like Jeturian’s Kubrador, Mendoza’s Manoro and Ralston Jover’s Bakal Boys, the sure guiding hand of Armando Lao and his real-time paradigm have been at work all along. This scriptwriting wizard, who has for years ensured a steady stream of well-conceived screenplays, lends his assistance to a new filmmaker once again, although one begins to wonder if his unmistakable influence has made for a homogenization of those films he has helped to shape. Frankly, for as long as a film is given ample time to germinate in the collaboration, what matters should be the well-made product.

That seems to be part of Halaw’s one glaring problem, its rough-draft finish. Like an almost exquisite corpse, Halaw has some missing vital parts. The interaction between the travelers, the agoraphobia of the open seas, the different complexions and colorations of a journey, seem hurriedly sketched, rushed. A sense of narrative truncation happens at the end, all too abruptly. Perhaps, this picture’s structure is an attempt to draw a parallel to the lay of the land, highlighting the chopped-up nature of a nation. Like a gangrenous limb, there is a part of us that must want, desperately, to be separated, amputated.

Reviewed: July 19, 2010 (Northern Portrait/The Persistence of Vision)
Posted by Noli Manaig at 6:22 AM

Email ThisBlogThis!Share to TwitterShare to FacebookShare to Pinterest
Labels: Cinemalaya 2010, Sheron Dayoc, The Persistence of Vision