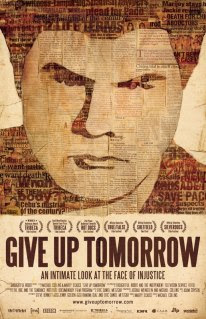 For most of us old enough to remember him, Paco Larrañaga seemed every inch guilty as charged of the rape and murder of the Chiong Sisters, Marijoy and Jacqueline, sometime in 1997 along with his co-accused. But the truth is we were made to know precious little of a more comprehensive story: forces in society worked to suppress the bigger, deeper, and more accurate picture.

More than 14 years later, the air may have sufficiently cooled. This film tries to go upstream, as it were, to dramatize the story of a long-suffering family who may have kept their silence for far too long, and perhaps more crucially, present Larrañaga's own testimony which was muzzled, every step of the way, by the trial courts. The film gives voice to a simple but well-corroborated defense: the plain, verifiable contention that Larrañaga, 20 years old then, was in Manila, studying at a culinary school, when the crimes were supposed to have taken place in Cebu.

Today, Larrañaga, a dual citizen of Spain and our country, sits in a prison in Madrid awaiting an elusive parole after a protracted odyssey, having shuttled perilously from a life sentence to a death sentence, then back again, before his repatriation. The wounds and hurts he and his family have been inflicted, however, may be too deep to ever fully heal.


That will help explain part of the thrust of the film not to spare anyone, not even the aggrieved family of the late Chiong Sisters. Many of the intentions of the bereaved parents come into question and they don’t come off smelling like roses. They are made to appear of knowingly pinning the blame for the deaths of their daughters on innocents. They are implicated in keeping mum on their knowledge of crimes. Suspects arise: there is a shadowy and powerful figure, hinted at but judiciously unrevealed by the film, who may be behind the horrific fate of their daughters, although this theory is not allowed to fully cohere.

But the overarching influence that the Chiongs are supposed to wield – an influence that holds sway on the police, the anti-crime groups, the justice system, all the way up to the president – does hold some water. It all stemmed from mass sympathy and outrage, the groundswell that put pressure on the minders of society. Everyone was sucked into the vortex of an almost soap-operatic drama that struck a societal chord: the perception that the rich always get away scot-free.

The film then is double-edged in its affect and effect: it is a defense of a kinsman as well as an implicit indictment of how society can go horribly wrong. Footages of editorial shows on television that were quick to condemn Larrañaga make us flinch, and the interviews of members of the Larrañaga family are full of helpless grief. They all add up to the plausibility of injustice being committed against someone repeatedly referred to as a “boy.” Society may be to blame, but their motivations, akin to that of a mob, however, may also be explicable. Larrañaga, mestizo and reputed to be a bad boy in Cebu,  “a scion of the influential Osmena clan,” became the flashpoint of a seething class antagonism. This is the revenge of the masses, so to speak, against one of the aristocracy.

But what proves ultimately powerful, despite the care and discretion of the filmmakers not to sentimentalize their subject to the point of seemingly insulating him, is how the film remains profoundly, dramatically affecting. There are not many footages involving Larrañaga’s own statements -- might he implicate himself otherwise? -- but somehow his scarcity and perceived reticence gives him an aura of dignity and an aura of even-mindedness. It is the members of his family who are called upon to reveal what this man and they themselves have had to suffer and endure in the interim. In the words of those who make testimonies on his behalf, he still remains a child. Then as the footages unfold, we see him being led away in handcuffs to the chants of death, then little by little we see him grow into adulthood, and because he remains something of a mystery throughout, we wonder what these experiences have wrought on his life. Then he speaks, uncertain of his future, quite philosophically, how if he is to give up on life, he should “give up tomorrow.” And tomorrow, he will repeat the same line. Heartbreaking.
Posted by Noli Manaig at 7:59 AM