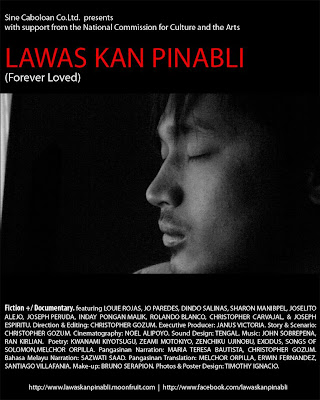 Writ large is the heroic struggle of the Filipino diaspora in movies about the overseas contract worker. When the dramatization of marytyrdom is even remotely justified, expect multiple versions out of it: Bagong Bayani and The Flor Contemplacion Story, for instance. Such films tend to perpetuate myths, mostly favorable, about our so-called unsung heroes. This is not, nor should it be, the whole story. Christopher Gozum’s experimental documentary, Forever Loved, forwards a corrective to all the attractive portraits in film or in other media. Or at least, Gozum's point is to paint a more humanized picture.
Few sources can be as reliable and comprehensive as Gozum concerning this. Himself an overseas contract worker of long-standing, he shot three years worth of footage in Saudi Arabia – its deserts, moors, cities and its Filipino expatriate community – without intention to turn it into a film. The material eventually took shape and the result is Forever Loved, a work with a fresh perspective, with a sometimes polemic and often long, discursive content.
Running 3 hours and 20 minutes, Forever Loved can be regarded as a documentary first, and a fictional/experimental film, second. The documentary footages are real-life interviews with Filipino overseas workers whose stories are both new and familiar. There is the near-rape victim, the unpaid worker, the fall guy, all reinforcing the notion of a tricky, knotty life abroad, but there are also stories from the flipside such as that of the fossil/rock collector, who seems to have found a fulfilling life in his adopted country.
The most telling segments of Forever Loved, however, lead it to credible authorities with articulate insight into the overseas worker. A Filipino journalist of long-tenure in Saudi Arabia explains how our history of colonial subservience makes us vulnerable to the abuse of foreigners. The creator of patnubay.com, a website that documents the Filipino experience abroad, reports a contrasting quality that is supposed to land the Filipino in trouble: his intrinsic stubbornness, a trait we have never thought exportable. Such contradictory insights hint at the complicated, checkered nature of the Filipino.
These documentary passages are framed by a fictional story about a newcomer in Saudi Arabia. He has traveled not just to take a job but to search for his wife who has gone missing for three years in that Middle Eastern country. His story takes its shape from the myth of Odyssey as well as the biblical Moses. Like Odysseus, he undertakes a far-ranging journey in the hopes of reaching his wife. Like Odysseus, he even finds a kind of Calypso in the desert. But he is also a kind of Moses, the film’s own analogy, who sadly discovers the debauchery of the exodus, that is, the crimes of the Filipino diaspora.
For every alleged case of victimization that befalls a Filipino, Gozum finds a contradictory voice, a credible statistic, to balance our vision. The facts paint the reverse of the martyr: a not-so-passive, not-so-innocent Filipino. His crimes, largely unreported or distorted when they reach our shores, abound such as drug-trafficking, gambling, and practices deemed illegal in host nations. Those who are in flight, the so-called runaway workers who often want to be repatriated, have a lot to run away for.
Forever Loved can be viewed, in simplistic terms, as two movies rolled into one. It is possible to untwine the documentary aspect from the fictive section. Each one, alone, could probably hold up to scrutiny. Together, they work in a kind of uneasy synergy that creates an eye-opening and wildly experimental film. That’s because naturalistic documentary does not traditionally mix with formal experiment. Admittedly Forever Loved is more cinematically inclusive – and therefore less disciplined – than the purely experimental Anacbanua.
It may, however, also be a simple question of unfamiliarity. Midway through this sprawling opus, the film’s interweaving of documentary and fiction assumes a rhythm we slide into, and the fresh perspective it affords about the Filipino overseas worker is wholly absorbing even if unflattering. The experience is greatly enhanced by the film's fictional/experimental portion that shares similarities with the avant-garde work of Philippe Garrel. Indelible are the fierce and binding rhythms of Pangasinan language, mostly the poetry of the poet-protagonist, and Ran Kirlian’s futuristic synths on the soundtrack.
Forever Loved, in the end, may well be the most thorough, most textured, and most insightful study on the Filipino OCW. Perhaps such a saga of a people's exodus is bound to unfold in many more unforeseen ways and will never see an immediate end. Gozum deserves to be commended for going against the grain, forwarding a perspective the rest of us aren't prepared to entertain. He never loses sight of the human picture, the stories he has heard or knows first-hand. These stories, whether grounded on the real or the invented, must resonate with him, cut him to the quick, a heart that harbors the traumas of being so far from home.


(Title in Pangasinan: Lawas Kan Pinabli)
Posted by Noli Manaig at 6:39 AM