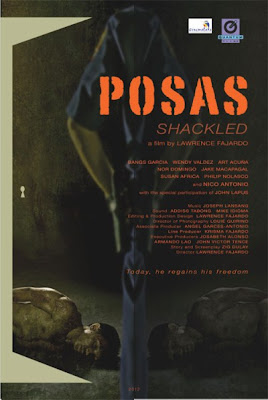 Like a visual motif threading the film, the camera fixes on these ministerial words on the sides of patrol cars, on the walls of a police precinct: to serve and to protect. Transpiring in a matter of a day, Lawrence Fajardo’s crime thriller, Posas, demonstrates the terrible irony of such a fighting cry. It begins with the commission of one petty crime and ends disturbingly with a terrible mug shot of a well-entrenched culture of higher crime and corruption. At film’s end, who gets served and protected gets unmasked yet again in a society where law is no deterrent but, paradoxically, an expedient that serves the unscrupulous.

It all starts with the simple theft of a cell phone in Quiapo. A pickpocket operating in the vicinity, Jestoni Biag, is caught red-handed and identified by his victim. At this point, the police procedural unfolds with the customary manner of the genre, from the finger-printing of the suspect to his moment at the fiscal’s office. But as the proceedings wear on, the brutalization of the petty thief takes hold. The thief’s denials are easy pickings for the brutal police who force a confession out of him. The police secure him his pardon, but not before utter pain, not before anguish, not before a Faustian bargain for his soul.

If nothing else, Posas depicts the pecking order of crime and corruption: from the street-level thief to the fence to the police to the unseen voices on the phones. The entrenched nature of this breeding ground for crime ought to be a chilling proposition but the treatment by Fajardo is sadly too impressionistic and epidermal. Instead of enlarging on his stories, he sometimes gets caught up in the improvisational skills brought in by his actors. He seems to be aiming for a documentary immediacy, although it is bound to pale in comparison to, say, the rawness of TV Patrol.

But that is not to say that the film has failed in his purpose. Although most of this material is mundane knowledge, it has its moments. For one, there is an almost imperceptible rearing of ugly heads here: corruption almost sneaks up on us. What might start as a routinary questioning of the suspect turns gradually into obscene dehumanization. What might seem like a complaisant handling of a pretty victim’s case, turns out to be an insidious ploy by the police all along: a calculated act of evil that is too practiced and fluid not to achieve its ends.

Fajardo also contributes to this genre the psychology of the criminal. Like the corrupt policemen around him, he is getting adapted to the technicalities of the law. He latches on to the loopholes, and even his family starts to reason like him. But as pecking orders go, he remains the bottom feeder. Posas, then, retells the tragedy of the small fry who at the end of the day will get the bad end of it. And here as in real life, he fails to get his day in the sun. Instead, he must suffer the ultimate loss of his soul. Here as in real life, he must reside in the shadows of the bigger and monstrous forces who manipulate and circumvent the law.

Title in English: Shackled
Posted by Noli Manaig at 8:53 AM