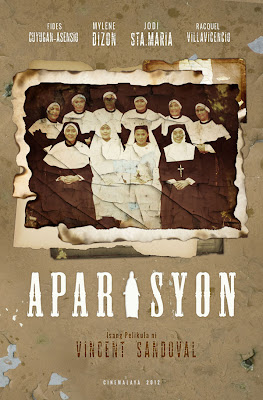 Darkness has fallen upon the country. The streets of the capital are smoldering and exploding with mass protests to overthrow a despotic regime. Plaza Miranda has just been bombed, sending shock waves of brutal repression. The proclamation of Martial Law seems imminent. Somewhere in the countryside -- in a nunnery in the woods -- the state of things, however, couldn’t be more different. Monastic life is all but untouched and proceeds with idyllic steadiness:  the nuns undertake their tasks in perfect peace and serenity, there is joy and wide smiles during meals. A new nun has even come to the fold. The spreading lawlessness, however, is about to shatter this peace and interrogate their connection with the outside world.

Vincent Sandoval’s Aparisyon is set with historical and political specificity, but it could happen anywhere where the fate of a people is at stake, where the push of a precious little could tilt the balance. Aparisyon is a film that allegorizes the inaction of the crucial many, the silent majority of society. More important, it thematizes the horrors and dangers of social passivity.

Rather than receive the terrifying news from outside, the Mother Superior in Aparisyon silences the last remaining radio with confiscation. Rather than resolve the ills that claw and paw at them, there is an inward direction and even self-flagellation. Rather than blow the whistle on a crime, the nuns allow themselves to be gagged, lest they call attention to themselves, lest the malefactors turn upon them.

Sandoval establishes all this with lush cinematography. The theme of cowardly inaction is carefully and poetically constructed in brilliant compositions. Often, the faces of elderly nuns are framed in close-ups to reveal deep and heavy circles around their eyes, eyes that silently betray fear and meekness and apprehension, brows that are knitted in self-concern. Mostly they are silent. What begins as a gravitation towards natural idylls, turns into a lingering in the cold interiors of the nunnery. The camera pans here are slow and lingering in keeping with the sluggish response of the nuns, in keeping with the themes of inaction and indecision.

Great credit is due the filmmaker for fashioning something that is often thought beyond conflation: a poetic and lyrical allegory that is also profoundly political, profoundly dialectical. It is doubly to his credit that he accomplishes this without leaving the environs of a nunnery. It features nuns but it may have little to do with them. In effect, Aparisyon questions, for one, our own received images about nuns – nuns that link up in the frontlines of People Power, nuns who are fierce, brave and eloquent -- but it never mocks us and our complacent stand. In this regard, Sandoval is something of a humanistic instructor, a Socratic mentor who always wants us to question the world. Wants us to jump down from the fences and act bravely and decisively when the crucial moment comes.
Posted by Noli Manaig at 8:38 AM