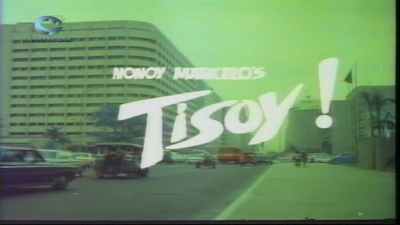 Ishmael Bernal’s Tisoy! is quite a lark -- every bit as boisterous and hilarious as Nonoy Marcelo’s comic strip that it adapts for the big screen. Quite a challenge to transpose something as embedded in pop culture as Marcelo’s menagerie into film, but Bernal strikes all the right notes. Come to think of it, an adaptation was just about ripe for the Seventies, when American and foreign influences held sway in everyone’s sensorium and slashes of Martial Law remained in the air, a time that begged to have a snapshot of its flora and fauna to be taken, as it were. Enter Tisoy, a young, free spirited mestizo, and his equally lively and adoring clique of friends.

Tisoy, as played with disarming panache by Christopher de Leon, does embody the charisma of the mestizo, the part-Caucasian so often held in high esteem and regard. He wears hip and body-hugging Western attire, speaks Tagalog in reverse, the slang of the times, and rides a Harley Davidson-like motorcycle. Arriving on the trot from America, he tows along his friends with whom he had initially fled local shores. He is looking for his American father, who has been sighted in Manila. But it’s also high time to touch base with old friends – and most of all to reunite with his long-suffering love interest, Maribubut.

Bernal’s brand of humor here relies, for the most part, on our awareness of its references. Tisoy is a grab bag of all kinds of nods, including, but not limited to, films and television advertisements of the seventies. There are homages to Julio Madiaga and Maynila sa Kuko ng Liwanag and Mike de Leon’s Itim, as well as Bert Marcelo reprising among other things his iconic line for San Miguel Beer. But there are also open hints of European inflection, as in close-ups of the pages of Le Figaro, and even perhaps a nod to Godard’s famous traffic jam in Weekend – minus the long tracking shot, but with an equally memorable set piece about restlessness and tedium.

Tisoy may be said to live and die with the Seventies and with those who remain attached to that decade. The film’s verve and intelligent energy, however, give it a life in popular culture: a self-propagating life as only films can sustain, as enduring as its originary comics. Along with creating a worthy vehicle for its lead, Christopher de Leon, Bernal’s challenge was not only to convey Nonoy Marcelo’s comic, but trenchant satire, but to make Tisoy endearing despite a cavalier regard for others.

There’s a palpable effort by Bernal to distance his work from being just a faithful adaptation, but to create a parallel cosmos – most particularly via the kind of references he chooses to include in the film. Tisoy, among other things, is a Nouvelle Vague-ish romp, a collage of fashion, advertisement, television, music, film and other representations of popular media. Somehow it all succeeds – and probably due partway to our familiarity with the material – in drawing a vivid ensemble of characters as well as a recognizable evocation of the times. We see it at the edges, around the characters, on their person, in their society, on their lips.

And perhaps rightly so: Tisoy revels in its memorable characters -- from Moody Diaz's Aling Otik to Bert Marcelo's Tikyo -- while glossing over a slender plot. But who is taking note – aren’t we here for the high jinks and the gags, the mannerisms and the tics of an epoch? One can also read it so: Tisoy is a film whose kinetic and free-wheeling ethos belies the authoritarianism and despotism of its times. And as the boisterous story of a fair-haired boy – or shall we say a fair-skinned boy -- this film can resonate in a country that remains, to this day, obsessed with such conundrums as skin color and other surface issues of identity. Heck, it may be high time for this film’s rediscovery.
Posted by Noli Manaig at 8:35 AM