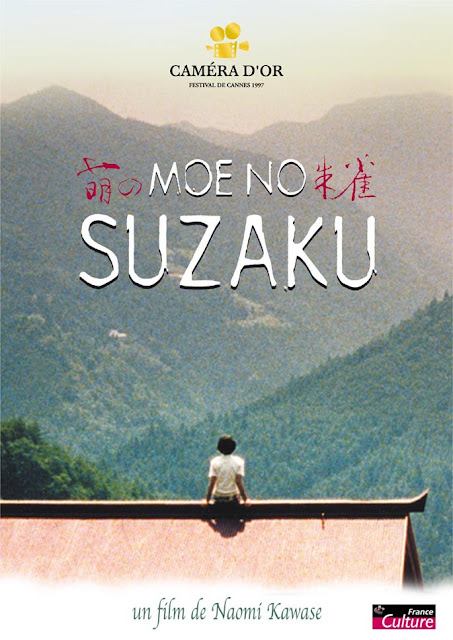 Naomi Kawase seems consigned at the moment to be the darling of film festivals, one of the best-kept secrets even among those who follow arthouse films. Fellow art-house compatriots like Hirokazu Kore-eda and Shinji Aoyama have found better luck and have crossed over to greater prominence. Even after winning the Golden Camera at Cannes in 1997, fame and wider audiences continue to elude this young Japanese director. One of the problems is that her work is largely unavailable outside of Japan, and hence any version with English subtitles. (Edit: Kawase has since created a website that makes her documentaries available in an 8-film dvd boxed set entitled "Tsumugu".)

Moe No Suzaku is an outstanding introduction to her oeuvre. It's an instant charmer that recalls the work of old Japanese masters, a throwback to times when family drama held sway among Japanese moviegoers. If you relish the quiet rhythms of Yasujiro Ozu and the lyrical imagery of Hou Hsiao-hsien, chances are you will enjoy this film. But Kawase also complements her visual style with very contemporary, eclectic touches that are well-integrated and fairly seamless. If anything, the results are haunting and engaging, a visual experience that complements a humanist story.

The story takes place in an agricultural village nestled among mountains in an unnamed locale in Japan. A prologue introduces the central characters of the movie, an extended family of farmers composed of  the farmer Kozo, his wife Sachiko, his daughter Michiru, his mother and his nephew Eisuke. The emotional center of this story, however, are the two young characters, Eisuke and Michiru, close-knit cousins who grow up together and have a very intimate relationship.

Fifteen years on, very little has changed for the village they inhabit. Outsiders from the city may idealize this village steeped in an idyllic and charming setting, but the villagers are eagerly waiting to usher in the machinery of modern times to pump life into its economy. Economic recession is hitting hard, and the new railway would open the markets outside their purview for their cash crops. Villagers gather and lament how construction of a railway station in their town has been put on hold.

These unfulfilled opportunities cast a pall on the villagers. One of the hardest hit is Kozo, who is so distraught that he takes his life. His wife is forced to work at a restaurant until she falls ill one day out of grief and exhaustion. Something has to give, sacrifices have to be considered, although relationships are at stake.

Moe Nu Suzaku captures not only a family’s quiet hardships. The beautifully photographed milieu  -- panoramas of rustic life and and unspoilt nature -- provide a needed contrast, recalling Hou Hsiao-hsien’s Dust in the Wind, where the similarities not only encompass a pristine setting but characters who must consider leaving their pastoral lives to improve their lot in life. Hou’s influence can also be felt in the overall mise-en-scene, while the posture of characters and their faraway gaze are echoes of Ozu. Kawase also borrows thematically from Ozu. In a book entitled Ozu,  Donald Richie puts forward a thesis on the old master's work: the dissolution of the family is a theme that runs through most of Ozu's mature films. This seems to be the central concern of Suzaku, but Kawase makes it more complex by introducing the destructive determinism of socio-economic forces. Intercut with lavish shots of the picturesque backdrop are documentary-like compositions of the unadorned faces of the villagers, adding poignancy to their sad fates.

On par with many of her more ballyhooed compatriots, Naomi Kawase deserves to be seen and heard by a wider audience, having proven herself with a formidable body of work that gamely straddles fiction and documentary. Now that her work is available on subtitled dvd, word of mouth should start to bode well for her and her future practice.


Title in English :The God Suzaku
reviewed: September, 2006
Posted by Noli Manaig at 1:42 AM