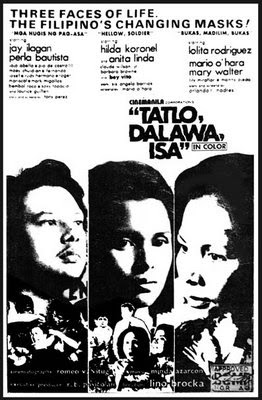 A dialectic tension between immediate generations is at work in this portmanteau film composed of three stories. Three unrelated stories that demonstrate different yet predictable outcomes, underscoring director Lino Brocka’s predilection for neat, schematic endings. Working with three different scenarists, Brocka directs all three segments, taking on this project after the success of his much-praised masterwork, Tinimbang Ka Ngunit Kulang, which was released earlier in the same year.

In Mga Hugis ng Pag-asa, Noni (played sympathetically by Jay Ilagan) undergoes the arduous pains of rehabilitation in a center for drug reformers. While it touches on Noni’s familial and filial problems and his subsequent descent into drug use, the film spotlights the almost inhuman, almost dubious methods the center utilizes to turn troubled lives around. There is adequate cursing and screaming – and, to a certain extent, release— to recall the unconventional techniques of Arthur Janov and the scenes of sadistic rehabilitation in A Clockwork Orange.

The second entry in this triptych is Hello, Soldier, a compassionate tale that depicts the lives of a mother and a daughter in the slums of Manila and the return of the former’s American soldier lover. It’s 1963, 17 years after they last parted ways at the end of the Second World War, and his return is meant to formalize his adoption of their daughter, Gina (Hilda Koronel). She is a willing would-be adoptee, dreaming of all things American—her bedroom walls covered with pinned Americana— and being lifted out of a life of poverty. On the day of his visit, with his American wife, Lucia, Gina’s mother, chooses to get drunk for the first time. The obvious and strident overtones of colonialist legacy – and the specters of neo-colonialism—are in evidence here, most especially in Lucia’s drunken anti-American tirade (a great bravura performance by Anita Linda).

In the final episode of this omnibus, Bukas, Madilim, Bukas, the limits of self-sacrifice are tested by matriarchal tyranny in an old Spanish family. Atang, (played with just the right measure of stricture by Mary Walter), the seemingly crippled matriarch, controls her household with an iron fist. Her despotic control of her household sees her daughter, Rosenda (played superbly with conflicted nuance by Lolita Rodriguez), devoting her life to nursing her mother. No househelp, let alone any outsider, is welcome unless the old woman approves it. Enter Miguelito (Mario O’Hara), the gardener, a seemingly guileless youth from the province who befriends Rosenda and awakens her sexuality. This narrative reverses the filial dynamics in Karoly Makk’s Szerelem (Love) and hints at noirish elements of intrigue and seduction.