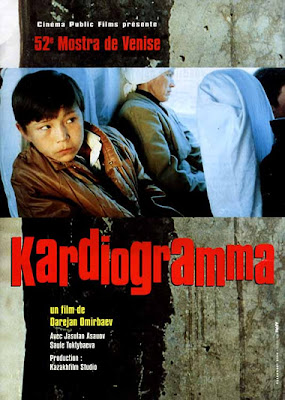 Think where Truffaut's 400 Blows leaves off, replace Antoine Doinel with a young farm boy and transplant the setting to a cold Kazakh institution -- this is how director Darezhan Omirbaev must have conceived of Kardiogramma. He makes one more modification: instead of a boys' reformatory, Jasulan, the young hero, is condemned to a sanatorium for children with heart ailments. Before it is all over, the heart's mettle will be tested, driven to the brink, the sense of claustrophobia and asphyxia enclosing it, the cold, institutional walls conjuring the dimensions of a prison.

By all accounts, Jasulan is a loner, by nature and by circumstance, hailing as he does from the desolate outskirts of this former Soviet state. For miles around, on native soil, there are no houses or signs of life, the plains of the countryside are wide open spaces. A painful contrast soon becomes apparent with his place of exile: a cold, dimly lit edifice populated with children who speak a different tongue. While this is a place for convalescents, it is not unlike a regular school, complete with the cruel hierarchical structure and strata.

Jasulan, not the least for not speaking a word of the sanatorium's lingua franca, is soon singled out for humiliation. His tormentors are unforgiving; they even have a foolproof way of inducing urination during sleep and Jasulan falls prey to it. Otherwise, the hectoring takes on more straightforward varieties.

Jasulan's one remaining solace is an unrealistic one, too, developing a crush as he does on the sanatorium's nurse. We find Jasulan frequenting the clinic for various cuts and bruises, only to discover that the nurse is being courted by one of the doctors. A number of sequences ensues, desperately chronicling his attempts to look in on them. Subsequently, we perversely rejoice with the naturally voyeuristic Jasulan when a secret is made known to him: a peephole into the women's showers. (In an earlier scene, his father rebukes him for addictively "watching tv programs of nude women.") But just when he gets the chance to see the woman of his dreams in the nude, the bullies threaten to play spoilsport yet again.

Voyeurism seems to be this film's humorous metaphor for freedom. For Jasulan who is exiled in more ways than one, held incommunicado among peers culturally different and only speaking Russian, the curtailment of this "right" is the last straw. His prison-like situation has been untenable all along. We have witnessed a stark contrast between his unfettered life at home and the regulated, often hostile existence in a cold city institution.

Kardiogramma's simple tale of a young boy in exile also seems to explore a bigger, darker parable: the continuing legacy of the former Soviet capital, its neo-imperialism, in the affairs of this newly independent state. There is a kind of estrangement sustained in an environment that privileges the Russian language. All in all, Omirbaev's latest film is an affecting tale of alienation, a portrait of the seeming dichotomy between urban and rural spaces, and a child's truncated sense of wonderment, all his myths coldy withheld from him, in an increasingly quasi-totalitarian environment.