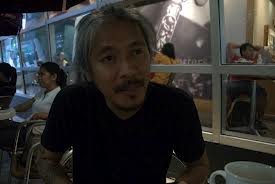 The ancient Greeks invented and defined the term apropos of our everyday fate. Agony. Ours is one born out of a myriad of cataclysms – both natural and auto-inflicted. Lav Diaz’s Agonistes, an admitted work-in-progress but already fully formed, meditates on the Filipino’s most pressing worldly struggle, his struggle to break out of material poverty and the non-material consequences of poverty. Hints, however, point to a more eschatological theme – the centrality or the simultaneity of the spiritual struggle.

Directing from his own script, Diaz transposes the ancient term agonistes to latter-day Philippines. He singles out the classic strugglers of contemporary times, the working-class men and the peasants, to shoulder grinding poverty. In truth, it can be said that the agonist has been a favorite fixture of Diaz’s other films: Heremias is both agonized and anguished, so is Hamin in Death in the Land of Encantos, tortured and demented at once. Epic but individual in scope, mythological and biblical in character, Diaz’s stories are veritable stories of struggles, sagas of agony.

Agonistes opens with a grandiose sequence of robust buildings under construction in Manila. This is the magnificence that, on a sudden, contrasts with the slumped figure of one construction worker, a young man named Juan. As he narrates what he has witnessed to Manoling, an older, brotherly fellow worker, he has been traumatized by the sight of one of his co-workers being buried alive in wet concrete at the construction site. But the occupational dangers are not the end of it – the rainy season soon floods the metropolis and makes it impossible for them to reach their workplace.

These two become so desperate that, over a drinking session, they latch on to a kind of Pascalian wager. Manoling has revealed a secret of treasure supposed to be buried in his family’s land somewhere in Bikol. If they find it, they are set for life. If not, it’s just a matter of a few days’ work and a matter of looking a little silly, perhaps. They aren’t even thinking of that: Manoling is just “tired” of the daily grind.

Quitting their jobs, they emerge in Bikol one day, purchase digging equipment and get to work. They meet Manoling’s brother who farms the land but whose wife Loleng is terminally ill with a lung disease. As the trenches deepen, Juan and Manoling only manage to turn up rusty metals and an old military boot. Manoling’s brother seems content to live a farmer’s life and jokes in the background about a share of the spoils. At dusk, all of them often – including the bed-ridden Loleng -- gather to watch the magnificent – otherworldly? – sunset.

Agonistes is a miserabilist ode to materialism – or an oblique one to spiritual “reorienting.” Or perhaps, their unresolved dialectic. As the almost Syssiphian diggings go on, the crash and crunch of shovels against sand and gravel alternate with the sound of Loleng’s deathly and fatal coughing. As Juan and Manoling pursue their treasurely dreams, they seem oblivious to the specter of death, the possibility of afterlife. Like a colossal god, Mayon Volcano towers in the background to shame their pointless efforts. The Pascalian wager of the search for treasure can thus be read as an allegory on misplaced faith itself, the pursuit of false gods.

Even in this rough cut, Agonistes holds up as an excellent film. The layers of meaning are already robust. The simplistic notion, for instance, of the materialistic agonist (represented by Juan and Manoling) is elevated by the presence of other kinds of agonists: Loleng, the terminally ill agonist whose struggle is physical illness and presumably coming to terms with her faith; and Manoling’s brother, outwardly content, but something else deep down.

It’s a world of lingering shadows, and Diaz complements his classic themes with black and white cinematography. It serves him well again – appropriately eerie and reminiscent, among others, of the work of Bela Tarr. Diaz’s compositions are painterly -- he must have studied classic portraiture in preparation for this -- which reinforces the timelessness and universality of his themes, whether it is a reckoning of the ills of the contemporary Filipino or not. Diaz’s work will transcend the borders of time and space and nationality, our agony aunt for all time.