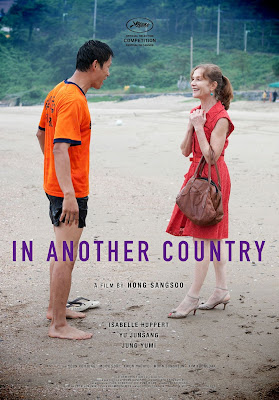 Certain poets, it is said, are fated to write one and only one kind of poem during their entire artistic lifetimes. Implicit in such an adage is that they are doomed to produce nothing but simulacra, a body of work consisting of iterations and repetitions: variations on a singular, obsessive theme. On the face of it, the South Korean writer-director, Hong Sang-soo, may appear to fit into this mold of narrowness, engaged as he seems in a film practice of redundancy and tautology observable in the many commonplaces permeating his films. Granting for a moment the plausibility of this reflexive assertion about Hong's work, is this destiny such a misfortune? Does the great Japanese director Yasujiro Ozu, for instance, ever receive the critical flak for his recurrent return, time and again, to his theme of familial dissolution? Does variety in theme or subject ensure a filmmaker's greatness? What about Louis Malle who has been critically punished and ignored for not pursuing a common, identifiable style and thematics in his otherwise excellent career? Suspicion surrounds the ambidextrous. Instead, a focalization on a common vein and constancy running through an artist's work is what distinguishes him and immortalizes him in the end.

Outwardly it may be true that Hong returns again and again to many striking commonalities: protagonists are all too often artists and intellectuals (e.g. poets, actors, painters, film directors), often caught at rest or at play, sightseeing or wandering around, often temperamentally embroiled in embarrassingly confrontational and heated arguments during merry-making or drinking sessions, often on the lookout for sex, thus suggesting the pivotal role of women, to be "stripped bare by her bachelors," but often the more evolved "future of man."

However, such characters, narrative patterns and set pieces pervading Hong's work are well-calculated and well-deployed, serving to dramatize an intricate web of interconnected themes and subjects: the fallibility of man and the relative apotheosis of woman. From masculine sexual obsession and eros (On the Occasion of Remembering the Turning Gate (2002)) to romantic triangles involving jealousy and rivalry (Woman is the Future of Man (2004), A Tale of Cinema (2005), Hahaha (2010)) to Nouvelle Vaguish depictions of invariable repetition of female destiny and reptilian male tendency (In Another Country (2012)), Hong has featured his own tropes and topoi around male and female dynamics. Whether or not they are reflections of the Korean man or woman, it must also be noted that his own conceptions of man run parallel to those of Antonioni's or Nuri Bilge Ceylan's depictions of anomic protagonists, even as Hong admits, self-deprecatingly, that his work simply reflects "the attitudes of men" he has encountered while amplifying them with his own traits and idiosyncracies.

Absent such a prior knowledge, an appraisal of Hong's contribution to cinema may be misleading, wanting in perspective and penetration. What Hong brings to Asian cinema is unique and unprecedented in its capacity to harmonize and reconcile classicism and modernism. In this light, Hong may even be said to transcend the cinematic contributions of the modernist but rigid minimalism practiced by such filmmakers as Tsai Ming-liang and Hou Hsiao-hsien. The works of these Taiwanese auteurs, it must be said, reflect an obsessive engagement with stylized and mannerist aesthetics, sometimes too caught up in self-conscious formal and technical devices, like the long take and the disavowal of close-ups, sometimes to the detriment of crafting a well-rounded narrative.

In a significant and crucial contrast, Hong never neglects the classical definition of a full-fledged drama. However, here's the twist: Hong runs away with it, plays around with drama's old-fashioned definition. He knows the rules -- or at least the rules he has learned, by his own confession, from having read Robert Bresson's Notes On The Cinematographer prior to conceiving and shooting his first film -- and thereby breaks them. After each of Hong's films, one comes away with a feeling of a narrative satisfaction, a sense of not being fictively shortchanged. And yet an enigma slowly dawns on him: a process of estrangement is  at work when one tries to describe its inner workings, recomposing his memories of the said film he has just seen until its mechanics become ineffable and inexplicable. This indescribable transformation that Hong's films undergo is a complex one that David Bordwell attributes to Hong's "geometric narrative structures," his dramatic designs (oddly enough, he calls them "non-narrative" structures, owing perhaps to their protean nature) that instantiate anachrony and therefore defy a straightforward and linear description.

From his first film, The Day A Pig Fell into the Well (1996), Hong has fiddled around with the rigid idea of conventional chronological sequentiality and synchronicity. He couches his stories, what he modestly calls "fragments", in several defamiliarizing ways: dreams (Night And Day (2008)), film within film (A Tale of Cinema (2005)), figments of imagination (In Another Country (2012)) and reminiscence (Hahaha (2010)). Most of the time these anachronies have no forewarnings -- for instance, no black-and-white or sepia sequences for memories, nor are there dissolves -- so that the effect can be jarring but often enough self-clarifying. Not content, Hong complicates and subverts linearity by an episodic narrative structure, introducing and foregrounding one or two characters at a time (The Day A Pig Fell into the Well (1996), The Power of Kangwon Province (1998)), their paths crossing briefly or by episodic themes or timetables (Night and Day (2008)).

This time around, Hong returns to his affinity with the film mecca of France. Catalysed by his fast friendship with Marin Karmitz, the French movie mogul, his Night and Day (2008) was predominantly set in Paris. In Another Country may be set on home ground, but the film looks, sounds and feels indebted to French New Wave director, Eric Rohmer. In this way, it is unlike any other Korean film, with most of its dialogue delivered in English. The script warrants it – with the presence of Isabelle Huppert in each of its three looping and recursive storylines, making the lingua franca necessary. This is easily Hong's most artifice-laden film of all -- a macaroni of languages and influences permeates it -- or at least the most self-conscious in the potentially double-edged barriers and games that language may wittingly or unwittingly create: Language as an almost musical and unmusical locus of Hong's modernity.


In Another Country foregrounds the self-reflexivity and inorganic nature of a foreign language, almost like a musical gone wrong, something that he avoided in Night and Day, where even in Paris, all characters remained Korean. But again Hong constructs episodic geometries, and again, in trademark fashion, centers on women, not one, not two, but three women – the axes around which Hong's male characters crazily revolve and spin. This time it’s Isabel Huppert, the illustrious French actress of many world classics, who plays three characters, similarly named Anne to our confusion, almost uniform in character to our added bewilderment, and to cap it off, only capable of communicating in English. She is the almost oblivious constant -- a beguiling creature to beady-eyed men -- as in most of Hong's films. The composite of a flawed man is straightforwardly caricatured yet again, lust-driven, prowling for sex. But this time, Hong elides the display of uncomfortable, mechanical sex and the verbal violence, or at least tempers it with comicality, opting for a sometimes-singsong, sometimes-stilted delivery of lines in an attempt to domesticate the foreign tongue.

Hong's latest film may best be noted for many dramatic ironies born of language, the sometimes unnatural diction of which is almost like a satire of perfect Hollywood English: the three Annes  -- whether in the person of a French director, an abandoned, divorced wife, or "a charming Frenchwoman" meeting her famous director lover in a tryst  -- has never learned, by virtue of her provenance or insulation -- the Korean language and is therefore never privy to the conversations around her, whether hurtful, impolite, public or personal. Huppert plays all her three characters with breezy and tongue-in-cheek uniformity, perfect for the seaside town she repairs to in each of the three segments, only distinguished with almost imperceptible touches like an umbrella or a different expression or gait, which adds to our sense of delicious bewilderment born out of the absence of narrative linearity. By the time the end comes, the three Annes have conflated confoundingly into one and the same.

Central to this film is the leitmotif of similar recursive dialogue in the borrowed language. At one point a character points it out and self-consciously asks, “What is this play with words?” Nuances of Hong's Korean dialogue in the past have often regrettably been lost in translation, but here much of the ludic play on words is rendered in English, making it one of the most transparent and humorous of all Hong’s films, the most joyous to watch and to listen to. At one point Anne the abandoned wife has a tete-a-tete with a Buddhist monk and it leads to a humorous and burlesque banter of existentialist questioning. Yet another dramatic irony does not spare Hong's usual targets: the lustful, amorous male. In one episode, a Korean colleague who warns Anne, the French director, of the Korean males' lusting after foreign women, turns out to be such a man. Meanwhile, sexual musical chairs are ongoing in the background.

Elsewhere, instead of Hong's usual genuflections to Antonioni's theme of ennui, there are nods to Resnais' themes of memory and synchronicity, nods to Jacques Tati (Monsieur Hulot), nods to Charlie Chaplin and Federico Fellini (Chaplin's mannerisms and Giulietta Massina’s demeanor are evoked by Huppert) and Luis Bunuel (in a reverse of That Obscure Object of Desire, where two females play one character) among the identifiable and noticeable references, expanding and enriching this film into something more far-ranging and playful than usual in a Hong outing.

But In Another Country, a story essentially about female consistency, is once again surrounded by male irresponsibility and turpitude. The story of the three uniform Annes is but a figment of the imagination of one teenage girl, passing time by writing a screenplay as she awaits for word on her criminal uncle. This is her last diversion and solace, confounding yet entertaining, as in the wildest of imaginations, her only remaining freedom, in a young but stigmatized life.