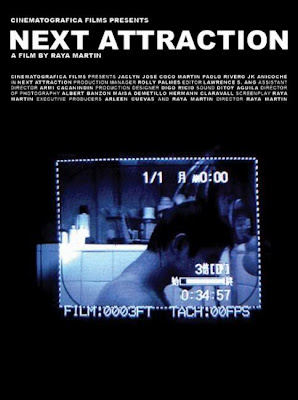 Probably more famously known for his cinema of the historical (A Short Film About the Indio Nacional, Autohystoria, and more recently, Independencia), Raya Martin is very rapidly making strides in another direction in what might be called his cinema of the topical. After inaugurating his Box Office Trilogy in 2008 with a film entitled Now Showing, the 24-year-old director has quickly followed it up with its second installment, Next Attraction, a film about the current state of the local film industry and about the young director’s conversations with his favored medium. In Next Attraction, we get for the most part the supposed neutrality of the cinema-verite documentary that is used, but the nature of what is being documented can be sometimes indicting.

Right from the start, we are asked to ruminate on a sequence shot – a long static one – of a house built circa 1970s. More precisely, this first scene happens in the poorly-kept backyard of this house, grass unmown, the roof water-stained, suggestive, perhaps, of unsettled, troubled thoughts. Winds buffet the coconut and palm trees and the other ornamentals in the background as a woman saunters out of the house and sits in one of the wrought-iron chairs in the yard. From a distance, her slow, deliberate manner, running her fingers through her hair, is indicative of wistful, pensive thoughts. We aren’t too sure, however; her face is a blur. The winds soon die down. As the minutes pass meditatively, the strange detail of a klieg light standing in a corner, beaming brightly in broad daylight, becomes apparent. What is this film up to now? Then we hear the empathic word: Cut! This has been all a take; the woman is an actress in a film.

It’s a film within a film. Director and writer Raya Martin, however, is not content with this tried-and-tested conceit. Francois Truffaut (Day for Night), Abbas Kiarostami (Close-Up) and Andrzej Wajda (Everything for Sale) have tried their hand at this narrative device before, but Martin goes one better: Next Attraction is a film within a film within a film. What results is surprisingly an intricate but coherent work. Three realities, three verisimilitudes in one film: one conveying a fictitious film crew being documented; another conveying the fictitious documentarians who never become visible other than through their scrupulous hands covering camera lenses, indicating cuts; and the third conveying the apparently “true story” being filmed. What we ultimately see is the documentarians’ point of view chronicling a film crew in action.

As might be expected when cameras are rolling, the film crew being documented are a picture of efficiency and synergy. They pull off the naturalism of a tight-knit group going about their business through a day of exacting work. Although they seem oblivious of anyone documenting them, they seem too eager to work with each other. No tantrum-throwing directors here, only modest actresses who don’t mind posing with admirers for pictures and such. This film crew is exemplary, bent assiduously on their tasks and everyone, from the director down to the technicians, is on his best behavior.

Complementing this film crew very well are the documentarians: very discreet and unobtrusive, as they chronicle the long, grueling but not necessarily unsatisfying shoots of a film crew. Using cinema-verite methods, the documentarians position themselves in the least intrusive positions on the set, shielding their lenses and turning off their cameras when needed. They almost shy away from the filmmakers’ shoots, and seem to home in on the dynamics of this film crew instead. What they capture is by turns reflective (conveyed through simple cuts to black) and frenetic (or perhaps tedious) (conveyed through jump cuts).

The overall tone of Next Attraction is, for the most part, tongue-in-cheek as it captures the controlled chaos of a film shoot. The fictitious film director (J.K. Anicoche) has time for small talk – jabbing playfully at Raya Martin the famous director in one of his overheard conversations with his crew. But if this is a time for a little humor, this also the time to pay homage to the capacity of the camera to fictionalize, to create its own truths. With simple editing trickery, this documentary of sorts is suggestive of ars cinematica – whose visual zeal and robustness echo the self-referential mannerisms of Godard.

And the film being shot? When the resulting film is tacked on and shown at the end, it might seem like anticlimax: it seems too aestheticized, too prettified compared to the relatively grittier realism of the actual shoot. But this fictitious film embodies many of the truths about what goes on in local cinema. The penchant for melodrama, the current predominance of indie aesthetics and production values, and the commodification of homoerotic acts are but some of the salient points of this fictitious film. And what is it about? Suffice to say that it features a troubled relationship between mother (Jacklyn Jose) and her 17-year-old son (Coco Martin).

Next Attraction is perhaps as much about the struggling (moribund?) state of one national cinema as it is a meditation on the nature of filmmaking, of what is true and what is not. Nothing (or perhaps everything) is what it seems: the truth is filtered through so many intervening mediations that might influence it. What may come billed as “a true story” is ultimately amplified, modulated and refracted by actor, film crew, director, editor and so on – subject to their synergy, the smallest eventuality, the smallest whimsy of everyone on the set. If there are passages that apotheosize an actress in bygone times in Now Showing, Next Attraction is more inclusive, it congratulates everyone who is (was ever) involved in that backbreaking endeavor called filmmaking. And perhaps that’s the note on which Raya Martin ultimately wants to leave us – not a scathing satire but an oblique homage to filmmaking.

Email ThisBlogThis!Share to TwitterShare to FacebookShare to Pinterest
Labels: Raya Martin, The Persistence of Vision