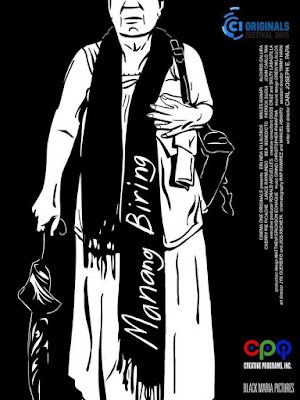 THE OTHERING OF THE ILOCANA

Admittedly there is much in the making of Manang Biring that translates as sheer Greek to me. Until today, I had never sat through a full-length animated movie done exclusively with the use of rotoscoping. I’d once seen a few brief glimpses of Linklater’s Waking Life, but had found the film overlong for one sitting, decided to take a rain check and forgot about it. My first impression of this modality of animation was that it works to impart an oneiric, sometimes comics-like quality, sometimes painterly dimension to live action. Rotoscoped imagery might remind you of the distortions and flatttenings of modern art, from Matisse to Munch, from Expressionism to Fauvism to Hyperrealism, or it might come across as animated comics done by a skilled draughtsman. A virtue with great applications, apparent even then.
No question, there is a serious art to it. There is also the artisanal dedication in the attention to detail that it entails. These days, however, there’s also recourse to the labor-saving substitute of 2D and 3D applications (even Adobe Photoshop can do it at a pinch) not to mention more powerful gpu and cpu rendering that can be had on the cheap. Beyond being an exercise in style, however, a work like Manang Biring makes you wonder what makes an animator take the pains to essentially make two movies – one, a live-action representation, the other, the rotoscoped product, a representation of the representation -- for the price of one.

In Manang Biring, there seems sufficient justification for a full-length feature rotoscoping: one, that no other Filipino has done it, and two, the film features apropos material (e.g. dream sequences, moments of absurdity) that is less easy to achieve with live action, and more evocative if done with the stylization of rotoscoping. My own sense is that, as this is a sort of elegy in honor of the filmmaker’s mother, a rotoscoped world affords the filmmaker a grieving distanciation, a mediation, a dressing of the wounds for something that remains fresh and unhealed in his memory. Manang Biring is further homage to Papa's late mother as well as  a sublimation of grief. If last year’s award-winning Ang ‘Di Paglimot ng Mga Alaala captured the mother's actual footage, this time, Papa swings to the other end of the spectrum with fictionalized animation.

From all appearances, Manang Biring entailed easily more time and elbow grease to put together than last year's debut, but Papa’s paean to his mother this time proves not without logical clunkiness and betrays, unwittingly, reservations about the idea of motherhood. As the titular mother, Manang Biring errs on the side not of motherly instinct but of worldly irrationality predicated on timidity and vanity, illegality and sheer lack of horse sense.

As if, in the end, after all, this mother does not want to be seen with warts and all. As if this tough Ilocana who bludgeons burglars and sells abortifacients in front of Quiapo Church suddenly grows deathly afraid (more afraid than death even) at the mention of a daughter who has gone missing for years and who now makes her whereabouts known all but too late -- when Manang Biring is battling for her life. If anything, someone faced with mortality knows no modesty when it comes to the comfort of family. One is truest at the verge of dying.

When Manang Biring receives word of her daughter’s homecoming, though, a daughter who has hitherto scarcely been a good, filial example, what does Manang Biring do with her borrowed time? She burns the candle at both ends committing one far-fetched, illegal scheme after another in an effort to make money to extend her life: teaming up with her erstwhile burglar in order to steal from an ecstasy dealer to selling the narcotic pills herself at a club for ravers. When all else fails, she conspires to put a stand-in in her place when the appointed time comes. That doesn't sound like human nature, let alone the verity about mothers. It sounds like the stuff of pure comics. Here are some of the reasons for the use of rotoscoping, after all.

If Kurosawa’s Ikiru is about how a terminally ill man tries to do his best to help his community, Manang Biring, all but to the end, is about scheming and deception, a headscratcher that even involves a male impersonator taking her place. Maybe it’s my naivete kicking in and the likes of Kanji Watanabe are a thing of the past. Cynicism, they will sing, is the ballad of the times.

Which begs a common sense question, my most nagging incredulity at this supposedly up-with-the-times world, this quick-fix world: why are the proceedings anachronistically trapped in a time warp where Manang Biring has to wait for many long months to get in touch with her daughter when she can get hooked up with latter-day telephony at an instant? And who even takes pains to write snail-mail these days? Perhaps Papa begs not to repeat himself, as videocam dialogue was the main motif of his debut film. The point of the delay of course is to dangle the specter of drama and death over the slowly-fading figure of the mother. There’s no question what obsesses Papa at the moment, there's no question about his sincerity about it, but the turns and devices of narrative should be better thought out in future projects.

Admittedly the foregoing may sound less than flattering, but let me temper that with a confession. It wouldn't surprise me at all if Manang Biring goes on to win the grand prize and subsequently make the rounds of overseas festivals. The film has virtues, I suspect, that only honest-to-goodness filmmakers can put a finger on. Papa is a filmmaker's filmmaker, full stop. He looks set toy go from strength to strength, what with all his technical wizardry to make even worthier, if not truly masterful films. His passion for filmmaking is immense. Ambidexterous in his command of the medium, even. He is like a Jan Svankmajer with his restless versatility who leaves little to chance. He is a meticulous animator who must be his own worst critic, teasing out detail after detail that may slip the casual eye. And his nods to cinema are those of a studious and devout adherent. Notice the littlest salutes to traditional filmmaking: how, for instance, a fish-eye lens effect bloats Manang Biring’s face. Note how he tries to achieve in rotoscope such cinematographic values as narrow depth of field and deep focus. Notice how timelapses of clouds swirl over Manang Biring as if ready to consume her. Pity, though, she all but cowers, even when she alternatively looks toughest.

Fight or flight? Manang Biring seesaws between the two extremes. Part of the unsettled internal conflict seems to stem from the long tradition of othering the Ilocana has undergone in screen representations. Much like the way the Waray has been portrayed as the other, the Ilocana as the other may still derive from the way Gloria Romero portrayed Manang Biday, the tough and feisty Ilocana, in the 1950s: tobacco munching, tough-talking, bellicose, armed with a two-by-two. Minus much of the trappings, Manang Biring channels this regional archetype, but dubiously extends it to naturalize an unlawful aggression, a wrong-headed means to stay alive. This defines a hamartia that is then compounded by a contradictory hamartia at the other extreme, that of Manang Biring being made to look like a timid, vain old lady when it comes to the matter of her daughter. Things don't add up. She seems, after all, not so much a more nuanced character as a confused and addled one. Mestastasis in the brain? Maybe. Maybe, and this is perhaps what the circuitous and clunky detours of aporetic feeling Manang Biring wishes to convey: everyone quakes at the prospect of death, even more so the prospect of a guilt-ridden, lonely and undignified death.
Posted by Noli Manaig at 8:42 AM