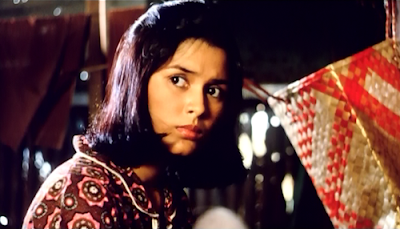 Reminiscent of Georges Franju’s Blood of the Beasts, though not as stomach-turning and not as willfully controversial, Insiang’s opening sequence showing the barbarous assembly-line butchery at a slaughterhouse serves effectively to foreshadow a grim and violent denouement. Set in the cramped warrens of Tondo, Insiang uses its neorealist sensibilities to depict the dark destiny of its title hero.

Insiang, played with quiet strength by Hilda Koronel, is the unwanted daughter of Tonia, a middle-aged woman who cavorts with younger men. One such man is Dado (Ruel Vernal), the slaughterhouse worker who is using the older woman to get to her daughter. Insiang, in the meantime, is being worn down by the advances of her boyfriend, Danny (Rex Cortez). And yes, he promises marriage.

In Insiang, the men are up to no good. There is a relatively minor character, a man with a pure heart, admiring Insiang from afar, but most of the men here have beady eyes and fire in their loins. Director Lino Brocka, working from a script by Lamberto E. Antonio, takes a page from the worldview of Shohei Imamura, a Japanese director who in films such as Insect Woman and The Pornographers portray strong and crafty women. Imamura’s women toy with their lust-heavy, sterile-minded men. In Brocka’s film, Insiang may ultimately fall prey to her pursuers but she is no bleeding heart about to fall paralysed in a state of inaction and catatonia.

Insiang’s way of getting even, however, beggars our sense of credulity. Her mother, Danny and Dado are all marked for revenge, but not in the way we expect it. Insiang is not the emotional victim, but the calculated mind who wakes up to her powers of sexual persuasion. Instead of lashing out emotionally like many victims do, she subtly controls Dado, her ravisher, with more of what he wants. Can she endure being raped over and over again? While biding her time, Insiang allows herself to be sexually used, waiting to be discovered by her mother, who she knows will not take Dado’s infidelity lightly. The subtle manipulation, this neat and intricate sort of vengeance, seems too hard to believe. It seems to have transcended its neorealist foundation to another category, another genre altogether. Granted, it’s a well-made film, it was the first Filipino film to be shown at the Cannes Film Festival (in 1976), but its reality is sheer cinematic reality – only to happen within the parameters of fictive film.