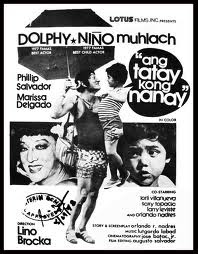 For director Lino Brocka, cinema is the art of compromise. Each film of his own choosing was matched with two or three – often commercial – projects thrust upon him. Filmmaking is, after all, big business: immense money is involved and taking on what producers and financiers dictate is every director’s Faustian bargain. In Ang Tatay Kong Nanay, there seemed to be a happy meeting of minds: it’s a commercial project, a vehicle for the comedy king, Dolphy, and yet its thematic concerns were easily close to Brocka’s heart.

Made in 1978, a hectic year for the director fielding film assignments left and right (Mananayaw, Gumising Ka, Maruja, Hayop sa Hayop, and Rubia Servios are the other voluminous works he churned out that year) Ang Tatay Kong Nanay still retains the hallmarks of a Brocka creation. The acting is first-rate and the story is as polished as it can be for a mass audience. But it’s easily the superb acting performances, particularly by Dolphy and Nino Muhlach, that carry this film and make it memorable.

Ang Tatay Kong Nanay, in not so many words, is Brocka’s valentine to the unsung fringe of society that he belongs to: the homosexual. Dolphy plays Dioscoro Derecho, a middle-aged gay hairdresser who, as the film opens, lives a simple independent life: a parlorista by day, and a cross-dressing gay by night. He lives for the occasional beauty contest for gays and the boisterous company of his like-minded friends. Complications arise when Dennis (Philip Salvador), a much younger man for whom Dioscoro carries a torch, turns up with his infant son.

Dennis leaves as soon as he arrives, plunking his son in the care of the long-suffering gay. The infant grows up to be Nonoy (Nino Muhlach), an inquisitive boy who knows Dioscoro as his only parent. As Nonoy starts to ask worldly questions, Dioscoro is forced to go straight and hide his double life. Further twists are afoot, when Dennis returns for a visit and Nonoy’s biological mother makes a bid for the young boy’s custody.

Brocka crafts his film like a melodrama, perhaps not as highbrow as Fassbinder, but perhaps along the lines of Douglas Sirk, aiming for the heart first and foremost. There are enough moments to make you reach for your hankies, always helped along by a well-worn musical motif in the background, a lullaby sung by Dioscoro and Nonoy to each other, with its affirmative lyrics of companionship. Dolphy’s dual performance, as both a gay and straight man, gives this film its comic divertissement. Nino Muhlach deserves what he was called back then, the Wonder Boy, essaying a sympathetic role, his eyes ever full of innocence, and yet instinctively stopping short of cloying. Lino Brocka, in the meantime, takes Orlando Nadres’ story and maps out the difficulty of binary lives. There ought to exist no dichotomy in the realm of human emotions. The third and other sexes are as human as those hardwired to be straight, and perhaps uniquely equipped to encompass all human instinct—paternal as well as maternal.