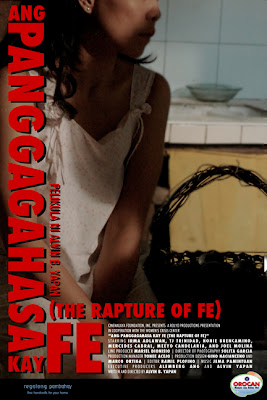 Alvin Yapan’s Ang Panggagahasa kay Fe is set in a seemingly sleepy and serene town, secluded enough for its realities to engender a suspension of disbelief, but not so secluded as to be hermetically sealed from the world outside. While the world undergoes shifts and upheavals of economic paradigms, this film's setting throws us back to primal and elemental times. Yapan's story comes in the shape of a fable that recalls the tales of the Brothers Grimm, Greek myths, or better yet, our own rich folklore. In a word, the eponymous woman's rapture is an allegory on the plight of the Filipino woman, her bewildered stance at self-preservation in the face of many undesirable choices.

Begin then with a disquieting scene in a quiet wooded town, a young man walking home witnesses to his horror a vision of three women hanging under a banyan tree. Seeking an explanation, he consults the local shaman, who explains that the three women were raped and hanged by Japanese soldiers during the occupation, apparently to demoralize their husbands who had taken up guerilla arms against the occupiers. Are these cries for help or are they coded messages from another world? Something is terribly amiss.

This disconcerting prologue intimates the possible realities encompassed: the physical, the paranormal, the supernatural. The eponymous character Fe has just been repatriated from a job in Singapore, a casualty of a world in an economic tailspin, not realizing that her return may not mean a bucolic peace. The film segues into Fe’s reintroduction to the hard life in her hometown: while she works as a weaver of rattan baskets, her husband works in another department of the same small-scale factory. What Fe doesn’t know is his husband Dante’s dalliances with a co-worker. The proprietor of the handicraft factory is Arturo, a young man who was Fe’s onetime secret lover. Arturo and his family now also own the couple’s land, mortgaged to pay for Fe’s expenditures to secure an overseas job.

The poverty Fe experiences upon her return is both economic and spiritual. What she faces is a life of privation, a hand-to-mouth existence, so that when a basket of black fruits keeps appearing at her doorstep, she can only welcome it without question. Dante is suspicious of a suitor and beats her up for a confession. Fe confronts Arturo, whom she suspects of sending the fruits but who is as equally puzzled. This, however, rekindles their passions and leads to trysts. Fe’s worldly fate has boiled down to a choice between two undesirable choices, two heavily-flawed men: Dante, an adulterous, abusive and possibly impotent man; and Arturo, a weak-hearted man who can’t stand apart from a possibly abusive father. The local shaman, however, soon informs Fe of her secret suitor: the kapre.

Ang Panggagahasa kay Fe disquiets – and disquiets well – on myriad levels. On its most literal level, it not only foregrounds a story of adultery and infidelity but a story of institutionalized human indiscretions through generations. On a symbolic level, it depicts an allegory of a universal and modern theme: the struggle of women to assert their hard-won subjectivity. Ang Panggagahasa kay Fe also becomes the arena for the dialectical struggle of modern thought and the primal and mythological psyche.

Alvin Yapan is a fabulist who knows to tell his story with the right pitch and detachment – to achieve the proper effect and affect and never strain for the sensational, the melodrama of fear and horror. When the elemental kapre finally materializes, he is not a 10-feet-hirsute creature smoking tobacco with a horrifying, otherworldly presence, but a man of modest human dimensions, his face wreathed in tattoos, his voice full of solemnity and fierceness. He is almost like an emissary of our tribal ancestors sent to rectify modern permissiveness and wayward morality. But the colors we attribute to him are dark and her presence evokes eerie feelings.

Ang Panggagahasa kay Fe is mysterious without being overly mystifying. It lays down its narrative in a linear, straightforward way, set in concrete reality interspersed with calculated intimations of the otherworldly and the supernatural. Folklorists and mythological purists may not agree with the liberties the writer-director has taken in fleshing out his kapre, but this decision enhances the disquieting ambiguity inherent in the role of the elemental. Working from his own screenplay, Yapan achieves the fine overlap of realities, women trying to play bigger roles versus traditional subjugation and patriarchy, modern thought versus traditional superstition, world realities versus small-town life. Stories like Yapan’s remain common in the rural countryside, but are gradually disappearing in an increasingly urbanized society. Ang Panggagahasa kay Fe, however, ends on an eerie note, as though to uphold the irrational past, times when the rapture of a woman may only mean little reprieve and certain doom.

Title in English: The Rapture of Fe
Posted by Noli Manaig at 8:47 AM

Email ThisBlogThis!Share to TwitterShare to FacebookShare to Pinterest
Labels: Alvin Yapan, The Persistence of Vision