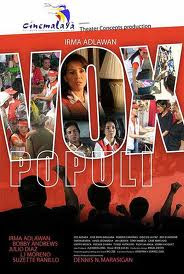 
The voice of people, the voice of God. In Dennis Marasigan’s frank but comic political satire Vox Populi, these ancient words are turned on their head and undergo the worst ironies and corruptions we in modern times are not exactly unfamiliar with and not exactly unaffected by. For all intents and purposes, we have rendered passé the spirit of this Latin saying, made extinct as Latin itself. For politics, Philippines-style, implicates and indicts us, who take on the term political animal with savage literalism. Our brand of politics, to amplify the metaphor, is a disgustingly tentacular beast that corrupts and depraves everything it touches.

In Vox Populi, the vantage point is recomposed and refreshed yet again – through the eyes of a blank-slate character straight out of a Frank Capra political comedy. Connie de Gracia, a first-time candidate in mayoralty elections in a town called San Cristobal, displays an unsophisticated, all-but-naive manner, with still youthful features that belie a past she terms disgraced. It’s a wise and ingenious character makeup, the tabula rasa, the innocent eye that might as well be that of a child. And it is just as well: Electoral candidates have a way of devolving into self-conscious and docile creatures who lose their ability to judge themselves and their public acts correctly

Everything happens on the last day of the campaign – the meat of this film and the subject of hand-held cameras following Connie de Gracia’s every move – packed as it is with gross incident and shockingly frank exposition that reveal the putrefying cross-section of Filipino politics. Around Connie de Gracia are a retinue of supporters who seem more naturally pragmatic and more politically wise than she could ever be: Tony, the political strategist who does most of the dirty work performing electoral sleights of hand behind her back; Ricky, Connie’s younger brother, who will use traditional electioneering tactics and personal charms to sway wide swaths of voters like religious groups and friendly block-voters, and Letty, her personal assistant who simultaneously feeds her voter psychology and sandwiches for missed meals.

Even in these all-too-cynical times, there remains a lightly off-putting power about the campaign transactions that go down in Vox Populi. They proceed shamelessly with the same audacity of commercial barter and bargain. Barefacedly, potential voters make known their problems that need to be resolved in a strict, reciprocal transaction of quid pro quo. Even Connie de Gracia without fully realizing it is already being sucked into this vortex of corruption. Asking about the technicalities of the electoral rules, she makes sure that her every campaign move is legal, although it may involve something so immoral and unethical as the subtle disenfranchisement of her opponents’ voters.

Essentially, Vox Populi goes over familiar but factual terrain, but Marasigan is an adept operator negotiating his material with controlled satire and refuses to milk his situations for easy laughs. When the moments do come, they are well-earned and authentically funny. The diverse and motley characters that Connie de Gracia encounters on the last day of the campaign are just as familiar: her brother’s grizzled godfather who only wants her to acknowledge all of her past – both their shameful parts and the reflected glories of her politician father – before he pledges his support; the pastor who has control of a block-voting religious group; an old professor of Connie’s who tests the true idealism and mettle of his old student; and a business tycoon who hedges his bets by supporting all the candidates with the agency of money. Marasigan weaves all these characters and their contexts with assured and masterful insight and confidence. A gifted farceur in this instance, Marasigan could have been a vulgar humorist if he didn’t exercise tranquil restraint. The laughs could have come fast and cheaply, but fortunately that isn’t so. He measures and weighs all his effects and the result is a potent film that doesn’t last one second more than it needs to.

Vox Populi is a refreshing satire with an old soul. We may know in advance the social types and social ills the film acidly presents to us but we shake our heads with as much outrage as the first time to its corrupt and savage truths. After all, these compromised and concessional truths define for us the hulking juggernaut known as the Filipino realpolitik. Redemption comes for the much-aggrieved audience at a crucial moment in the film when a group of youths approach candidate Connie – to pledge their support. Her strategists ask automatically, In return for what? The answer is a gentle reproach – or perhaps a stinging rebuke – of youthful idealism, a moment of exclamatory significance for a crowd awaiting sweet deliverance.
Posted by Noli Manaig at 8:55 AM

Email ThisBlogThis!Share to TwitterShare to FacebookShare to Pinterest
Labels: Dennis Marasigan, The Persistence of Vision