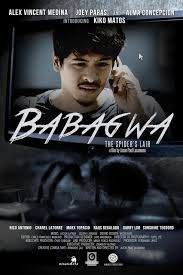 Babagwa, simply put, is a film about just deserts, comeuppance, the punitive consequences of the immoral, et cetera. To cut to the chase, the inevitability of reversal and retribution in Laxamana's film about deceptive cyberspace fantasies is too telegraphed even before one is midway through the movie. The virtual world it constructs shows characters manufactured with anticipatable illusory trappings. The illusion of the handsome and the beautiful: we are made abundantly aware of this set-up, through the online reveries of its main character and henceforth we are long prepared for the eventual erosion of make-believe. This gives the movie the patina of predictability that taints it. Sufferance is the overriding emotion one experiences in this spider’s lair that doesn’t stick nor pin us down. The web of unfolding lies and deceit, the foreseeable confidence trick ending in inversion, consigns Babagwa into a match-box of sorts meant alone for child-like ignorance which still keeps the silk of spiders, liable to be carried around in a dark, forgotten pocket.

What’s wrong, for the most part, is the film's predictable Catholicism and its retributive dictates upheld by its filmmakers. What’s wrong is its schematic causality, how the characters are too predictably dastardly not to deserve what’s coming to them at the end. What’s wrong is how it patronizes customary morality. However, its moral diktats are more than a century late. The era of Nietzsche, de Sade, Baudelaire and Artaud has long been upon us in their imaginings of the transgressive. Maybe the whole concept of a genre movie mongering in "a web of lies and deception" is just too wearisome for words, a plot-line whose main thrust is sex and more sex. Which is, all too predictably, in Babagwa’s agenda.

About its central protagonist, Greg (Alex Medina) is a facebook scam artist who virtually styles himself as a rich, philanthropic kid, with the elaborate con leading to him and his conspirators raking in money through some fake emergency scenario. (In real life, he is a malcontent who gripes about his small cut from this online racket. In real life, he seems too naive for a slick operator to never suspect and second-guess the wiles and ruses of his prospective victims. A con man being conned is, by now, too pat.) The rest is a mop-up job that hides the spoors of his cyber crimes. His accomplices are no less odious, Marney, a gay man in dire need of money (Joey Paras) serves as the brains orchestrating this virtual fakery, the community of bogus accounts revolving around the fake rich-kid persona. A third but subsidiary character serves as the owner of the bank account.

Maybe our inner moralists will go gungho for this movie. Crime doesn’t pay, the golden rule, karma, et cetera, they will agree has had a hand in it. In short, the microcosm of Babagwa is too orderly, too tractable, too docile even, in its sense of the wrong and the immoral. Me? Maybe I’m just looking for something novel, or maybe I’m still flirting with the Nietzschean transvaluation of all values. The Baudelairean flower of evil. The Artaudian devaluation of values.

Maybe when one looks at it through rose-tinted glasses, it can serve a cautionary purpose. Don’t be fooled by virtual illusions, it may wish us to pay heed. Maybe if you are a wide-eyed teenager, and naively prone to believe in the imaginary world of cyber prestidigitation, the so-called machinations of this movie might resonate. Heavens forbid. Like a miniscule spider, this one's for the beaks of birds.

My other beef with it is that it takes a facile shortcut and presents an artificial dilemma at the end: what if instead of the rich, "spinsterish" woman at the other end, she turns out to be an immoral, insufferable beauty instead? Someone with all that, plus a glorious and irresistible past -- like say in Billy Wilder's Sunset Boulevard. As Wilder shows, that would have been a nightmare scenario. Even as Babagwa ends open-endedly with the con man being conned, what will keep him from bolting? The crime he has already acknowleged? The crime he is more than willing to take the fall for? The movie is trapped in its own artificiality. It only goes back to the film it is so desperately trying to channel and draw upon. Big difference: Sunset Boulevard goes straight for the jugular, the illusion and enchantment is plausible and established from the get-go, irrevocably, inescapably so: the characters go cheek-by-jowl in all the bigger-than-life illusion of tinsel enchantment and fantasy.

None of this flimsy gossamer you can flick aside just like that.

Title in English: The Spider's Lair
Posted by Noli Manaig at 10:11 AM