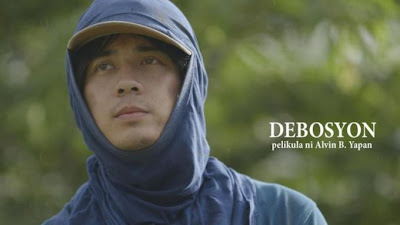 Henceforth, a compact between him and us -- both sides sustaining, in each other, a mutual faith.

Keeping faith, pledging belief in the praxis of this writer-director as a creator of cinematic art, as a storyteller, as a purveyor of native knowledge. In return, he vows not to shortchange us in an effort to keep us in the thrall of "enchantment." I’ve never met Alvin Yapan, nor have ever heard any anecdotes about him, but this appears to me is Debosyon’s secret thesis. Yapan is in search of his twin – the poet in search of his steadfast reader, a kindred audience. Yapan has proven to be an enchanter, a thoughtful fabulist, literally the interpreter of our native fantasies and folklore amid our backtracking stance from the phenomena of the mythic and the supernatural. Yapan embodies the dwindling breed who can still shift shapes with the times, even in monstrous ways, in the hopes of exhorting his viewer to keep faith and not abandon him.

The director of Ang Panggagahasa Kay Fe is very much the director of Debosyon. Both films convincingly transport us to Yapan’s realm of fantasy and unreality that we are gradually relinquishing and crowding out, metaphysically and spatially. If Ang Panggagahasa shows a kapre's earthly incursion as an act born out of territorial marginalization and encroachment, Debosyon is likewise that -- where forests once lay untouched, they are now crawling with flower gatherers and rebels -- installing the legend of Daragang Magayon and the Virgin of Penafrancia as the last bastion of our spiritual and mythical culture.

Myth and religion, and their final stand. We must stay the course and keep faith in it. Yapan seems to say this in ways that never sound too desperate, but always with a modicum of grace and artistry. Debosyon may one day be no more than a relic of a forgotten time, an anachronism in the age of shifting cultures and ideologies, but the artfully heroic and tenacious holding onto a fast receding epoch is where Yapan commits and casts his lot.

Devotion, to tease out the connotations of this word, is a heroic, even mystical, attribute, after all. Yapan, by the way he has reconstituted our narrative heritage and returned to something that exerts lesser and lesser influence on us, is a heroic, perhaps quixotic, yet nonetheless dedicated director. Thus he hopes nothing less from us: that we, his audience, will reciprocate his own devotional and votive efforts. Yapan, after all, is a university professor whose intrinsic tendency is to impart knowledge. Devotion should be a two-way avenue: the teacher instilling knowledge, as the student processes his every word and converts it to usable wisdom.

Yapan’s Debosyon proves no less as a shorthand for a leap of faith, no matter how the fantastic half-human, half-mythical chimera takes form. No matter what shape and shift Oryol, Daragang Magayon, the Virgin of Penafrancia assume, the viewer must stand firmly by and not lose ground. Debosyon, if anything, is almost certainly a repudiation of the literalism of verifiable science, in contradistinction to the way Yapan has come to end his films with double or multiple meanings. That is the realm of poetry, not cut-and-dried certainty always reduced to a unitary resolution. But even as Yapan exhorts us to pay heed and keep faith, he will endeavor to show all his cards, his own human nature perhaps, out of his own good faith as a steadfast educator. Debosyon is his confession of not being infallible, that he can be a monstrous entity, but his monstrosity is not ill motive but simply a rigorous eagerness to profess and be learned from.

As Debosyon culminates in the intertwining of man and myth, both in metaphorical and literal ways, a more intense confession takes place. Why man has kept faith in his supernatural beloved is the result of a devotee’s instinctual epiphany through intuition – again a reproach of the growing scientificity of civilized and modernized life. Debosyon, by contrast, stands as an earthy, all but bestial reproach of the strict morality that science props up -- the monism of science dovetailing with the monotheism of religion -- a science which finds no virtue nor value in the union of man and myth, man with anyone. (What might be the most chimerical sex, the most chimerical union, the film seems to rhetorically ask.) As with Yapan’s Ang Sayaw ng Dalawang Kaliwang Paa where the prospective male lovers face each other eye to eye in a meaningful way, Debosyon does confess how the transcendent glint in the eyes tells the whole story. Cinema, it bears repeating after all, is the kindred medium for the eye, and this is Yapan’s newfound medium to instruct us, never too literally, but with a creatively sinuous and shape-shifting dexterity.
Posted by Noli Manaig at 12:06 AM