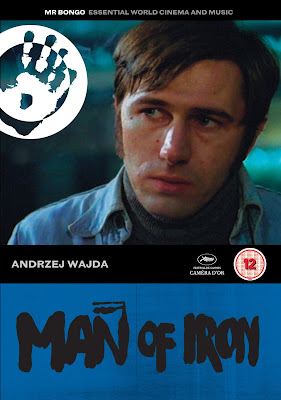 Gdansk, Poland, at a crucial climacteric of this country’s history, serves as the living and breathing locus for this film. Forged by a hard life as a worker in the Lenin Shipyards of this city, the main protagonist, Maciej Tomczyk, takes up his father’s ideological beliefs and his working class convictions to lead the first labor strikes against the Communist regime in power.

This film charts the first stirrings of the Solidarity Movement, the workers’ trade union founded in 1980 that eventually forced the State to capitulate to its demands, and later on eroded communism and swept to power with Lech Walesa as president.

Tomcyzk, the eponymous hero, is a fictitious character, but his exploits are unmistakably those of Lech Walesa, who appears as himself at certain points in the film to reinforce the point. At film’s beginning, we are given to understand that much of the screenplay is faithfully lifted from actual events in Polish history, and it becomes clear that it’s a thinly veiled reference to the historical figure and movement. What is fictionalized, however, is Tomcyzk’s father, who in an earlier Wajda film (Man of Marble) served as an exemplary worker figuring in state propaganda and became a model after which state-commissioned statues were modeled.

Man of Iron, its mostly factual sequel, traces the titular hero’s emergence as a full-fledged hero of the working class, transcending the unfulfilled ideals of his illustrious father. It is not so much a metamorphosis that changes him, but living in Gdansk, a hotbed of working class ferment, has forged his ideals and concerns in life. His father, whom everyone still reveres, is an influence on him, although Tomczyk momentarily grows disillusioned with him over his refusal to support workers’ strikes. Man of Iron presents a preeminent man in its portrayal of a man of praxis, while Man of Marble depicts a theoretical figure.

Andrzej Wajda fleshes out Tomczyk’s personal history almost too sensitively and idealistically, however. Near perfection, his only fault, it would seem, is his impetuousness, his youthful exuberance that leads him to question his father. Predictably, in the end, his youthful sacrifices are all vindicated, with the victory of the movement he almost singlehandedly brought to life.

Grounding this quasi-Walesa account of history is the fictitious account of a journalist who is under duress by a Communist publication to manufacture a damning report against the labor leader while battling bouts of alcoholism. This subplot provides the drama to telescope the whole labor leader’s life, captured in semi-documentary terms, but this man's fate, behind the scenes and ahistorical to begin with, seems, by contrast, pitifully lost in the shuffle, overshadowed by the grandeur of the titular hero.