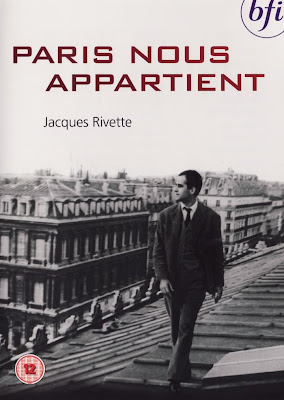 Paris has never looked and felt this eerie, this sinister, surcharged with quiet hysteria. For a dark moment, all the lights seem to have gone out on this eternally illuminated city. This city is in the grip of a maelstrom -- of paranoia, mystery and suspicion, erasing our bright, flood-lit preconceptions about it. Rivette conjures up this benighted setting out of nothing, a shoestring budget, but succeeds in pulling off a psychological thriller worthy of Hitchcock or Lynch. This feature debut by another Cahiers du Cinema critic, however, is not for everyone: it’s been described variously as “too hermetic” and “too impenetrable” for its own good.

The Paris depicted in this film is one inhabited by shadowy and marginalized figures: exiles, intellectuals, suspected spies and revolutionaries, struggling artists and immigrants, and sundry other characters with suspicious motives and sanities. The Paris of this film, however, is not to be outdone: it's a dark presence that pervades this film like a repeating motif, like another character. Whenever the camera probes its streets, a sensation of vertigo creeps in, heightened by an ominous soundtrack, full of dark foreboding. This defamiliarized city is made more pronounced with its choice of a central protagonist: a young literature student named Anne Goupil, a seemingly impressionable youth who becomes embroiled in the thick of dark intrigue and the influence of mysterious characters who may or may not be involved in affairs that have sinister, international repercussions.

Taking place among student circles and Paris intelligentsia, the story is set into motion by the mysterious death of a Spanish exchange student named Juan, a death rumored to be a case of forced suicide or murder by a shadowy international group. The subsequent disappearance of his sister, a student leader leading a campaign against the Franco regime in Spain, deepens the mystery.

But it is the angry and half-coherent ramblings of Philip Kaufman, an American writer exiled by the Mccarthy witch trials, that increase the sense of paranoia permeating the story. He is convinced that the death of the Spanish student is not suicide and his missing guitar recordings might provide a damning clue that will reveal the unseen hand (a MacGuffin?). Anne meets the babbling writer in a student gathering and immediately comes under his influence, seemingly made credible by the fact that he is a Pulitzer Prize awardee. When the student visits his hiding place, however, his bedroom walls are lined with manic sketches of cartoon-like figures.

Another character who seems to know more about the Spaniard’s death than she lets on is Terry Yordan, the dead student’s American girlfriend. It turns out, later on, that she, too, was previously involved with the American writer. The connection between the two Americans runs deeper -- this becomes clear soon enough, as we catch them conversing in riddles, something that only the ending will finally illuminate.

Terry Yordan’s present boyfriend, Gerard Lenz, a theatrical director trying to put together Shakespeare’s “Pericles,” adds another element of mystery. In the course of the film, Anne also enters his inner circle as an actress in his play, and as a close and concerned confidante. The American writer is convinced that Gerard, too, will suffer the same fate as the dead Spaniard. Before long, Gerard begins to show signs of breaking down, coming to a head when Anne receives a suicide note apparently from him.

Part of this film’s miracle is the fact that it was made at all. Some of the credit must go to Rivette’s friends at Cahiers du Cinema, who in true "la politique des copains" fashion – the Cahiers brand of solidarity – bankrolled part of the capital and provided technical assistance for this film’s completion. Everyone on the cast and crew were hired on credit, until the film’s eventual release in 1960 underwrote it. It’s a labor of love for Rivette, who had to juggle production as well direction capacities in its making, suspending shoots on Sundays to raise additional funds, before filming resumed on Mondays.

As with many of Rivette films, there’s more than meets the eye when we watch Paris Is Ours – more levels and intricacies than the literal one. Rivette’s fascination with theatre begins with this film, to be further explored in films like L’Amour Fou and Va Savoir, that film-within-a-film structure that provides a counterpoint to the themes of its movies. Politics is not the subject of this film, but there are enough references in it to derive an allegory: one that points to the harrowing consequences of fascism on a highly democratized society like France. The allusions to McCarthyism, Nazism and Falangism make sure of that. The casualty is measured not so much by a body count, but a massacre of minds.